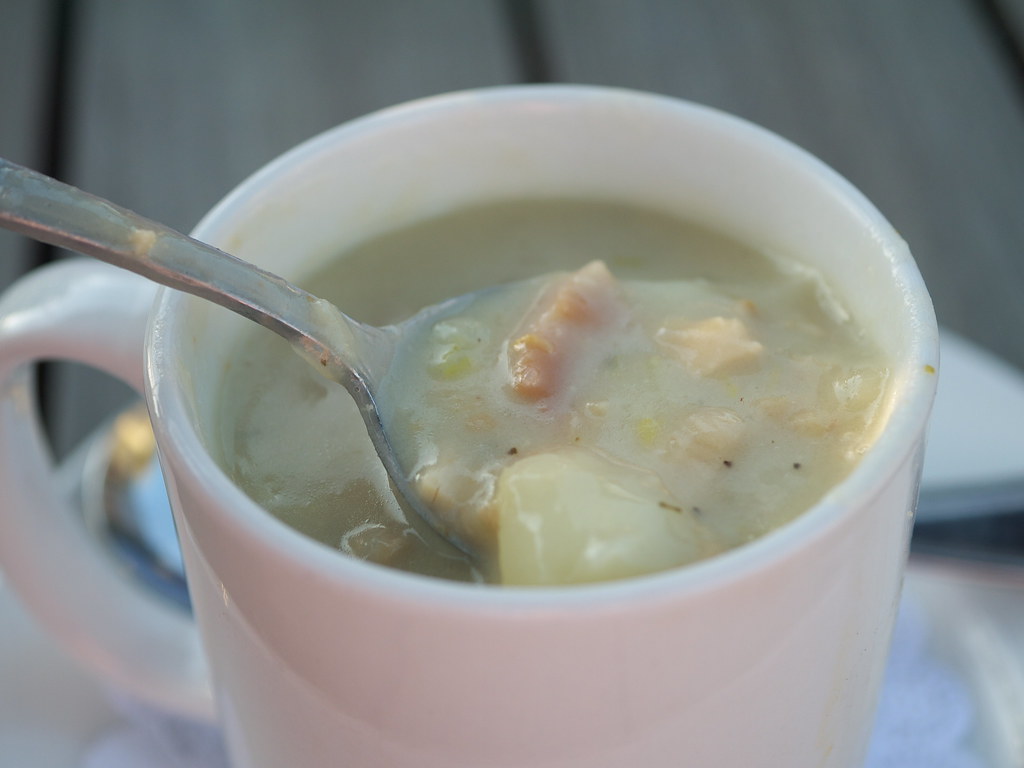 Not Wabbit Season. Not Duck Season. Sadly, not even Baseball Season for Cleveland in a few more days. But - it is Clam Bake Season! After seeing the post by Fishers American Tavern in Solon about their clam bake, we were excited to try it. It's available Thursday-Saturday now through the month of October. We'd just had Taco Tuesday there two days prior, and it wasn't crowded at all, so I didn't make a reservation, even as the clock slipped to 5:45pm. And the parking lot was completely jammed. Cars were parked on the lawn next to the parking lot. We knew this meant that the restaurant would be completely filled and very cramped.
Sad, we looked at each other and Bob said, "how about Bar 50/20 next door?" Though we both were jonesing for clams, we decided it could wait for another day. Then we walked into Bar 50/20, and learned that they also have just started their Clam Bake Season, they just haven't told anyone yet. Well, I'm telling you! And we got to dine on the patio during a perfect early fall evening, so it was a win-win.
We had decided before leaving the house to share one clam bake and order an extra dozen clams so we could each have a dozen. As we anticipated, that was more than enough food for the two of us.

First course, a mug of Clam Chowda. Big chunks of potato and bacon rounded out the goodness. We shared it and it was a perfect portion. 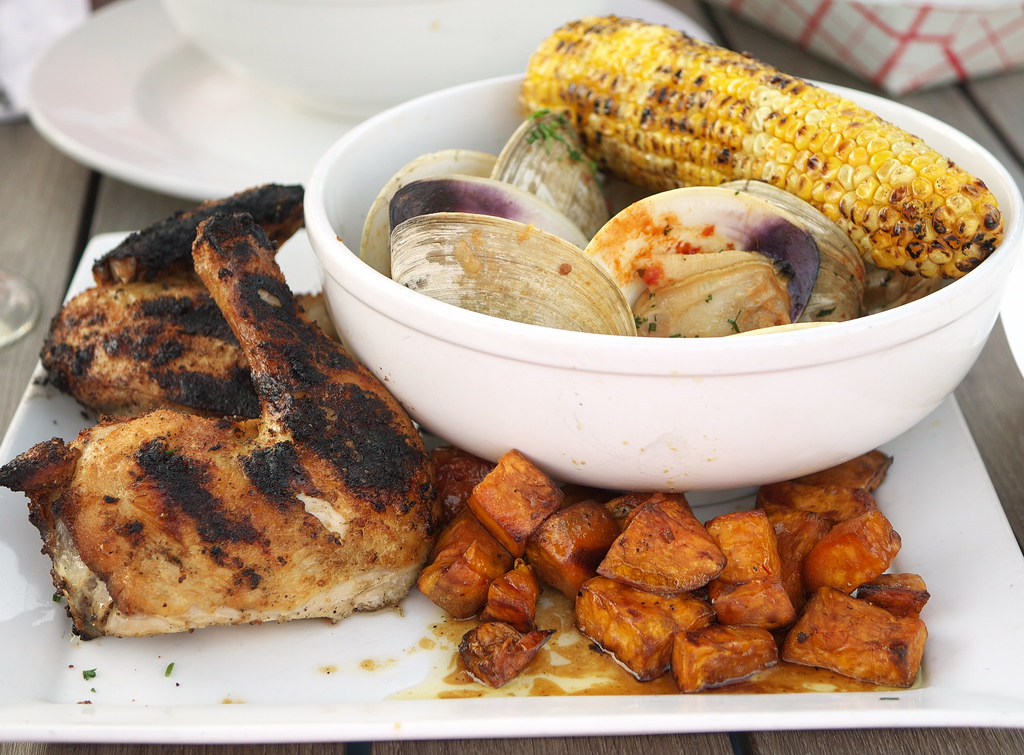 The stars of the show! The dozen steamed clams were 2 varieties, not all Little Necks as stated on the menu. I prefer the Little Necks, but all were enjoyable, especially since they were delivered in a bowl of tomato-infused broth! The Honey Pomegranate Roasted Sweet Potatoes seemed like a pre-Rosh Hashonah treat (since both honey and pomegranate are traditional items for that festive New Year meal), and were a real step up from the traditional baked or boiled white potatoes. As we predicted, we barely made a dent in the Garlic Herb Roast Chicken, after polishing off our clams. Both the chicken and the corn were both redolent of the grille and full of flavor. The breast meat was even more delicious dipped in that tomato-ey broth! 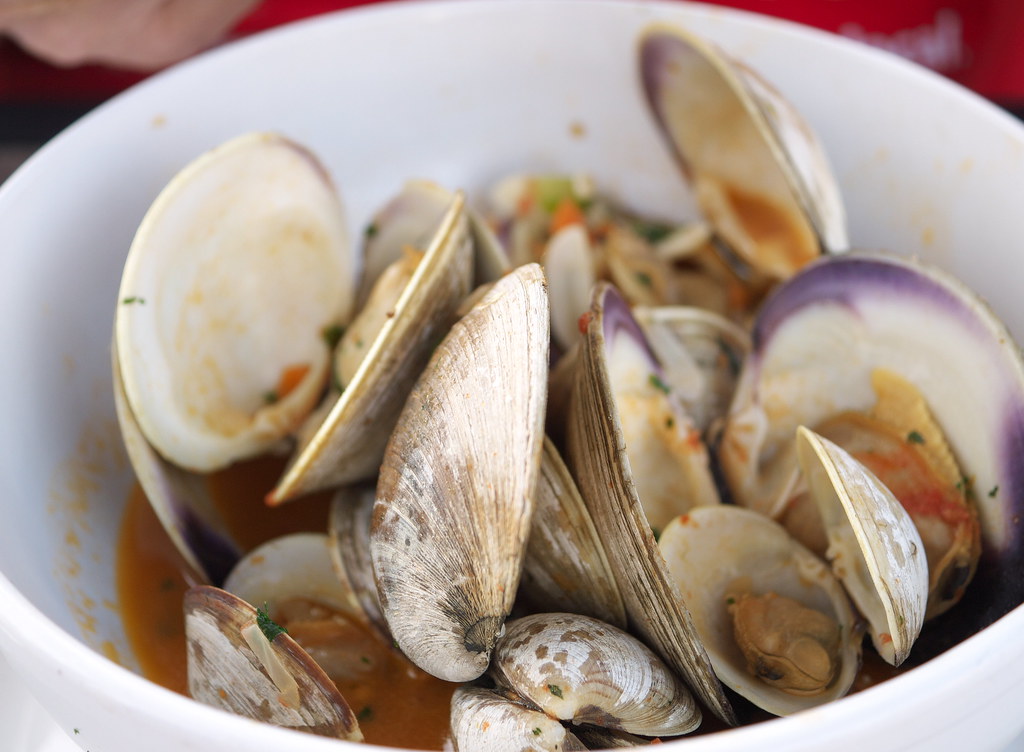 Do NOT wait till you get home! Bar 50/20-Mish Mosh is offering three different meat options with this bake Monday-Saturday, and adds an additional choice of 1.5# Steamed Split Maine Lobster Thursday-Saturday. Instead of chicken, you can choose a half rack of Dry Rubbed BBQ Basted Baby Back Pork Ribs, or Black Angus NY Strip Steak. Prices are: $28 for chicken, $33 for ribs, $37 for steak, and $56 for the lobster, which come in alive and stay that way until you order them. The extra dozen clams were $13.
Fun playing with Clam Bake Season started for us at Bar 50/20, and we'll be back to try some of the variations, but there will also be others, I hope, before we're done. Fishers does take reservations . . . .
Bar 50/20 aka Mish Mosh
5020 Brainard Road
Solon, Ohio 44139
(440) 349-7300
mishmosheatery@gmail.com
No website, FB page: https://www.facebook.com/bar5020/
Open for lunch and dinner M-TH 11:30am-11pm, Fri-Sat until 1am
Reservations accepted and encouraged
Source: funplayingwithfood