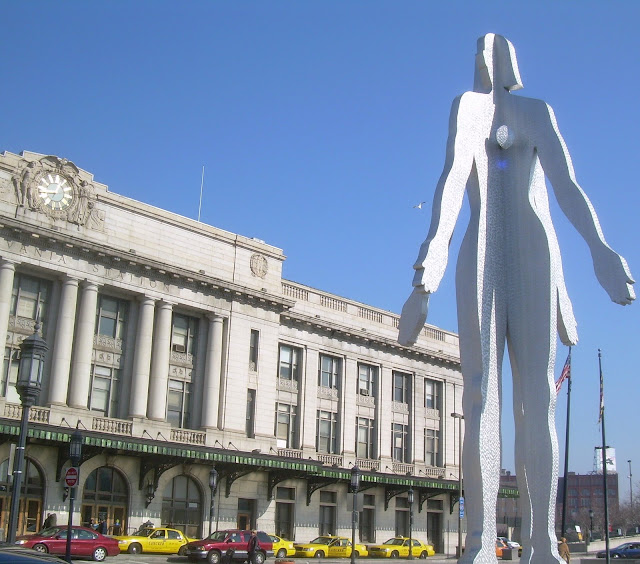 While the planners at the Baltimore Metropolitan Council have declared failure in the effort to build any new rail transit in their 25 year plan, there's still a project that can keep the door open. The West Baltimore MARC Station must be totally replaced when the planned new Amtrak tunnel is built. For this new station, $90M has been programmed in the region's long range plan. This creates a great opportunity to use the Amtrak Northeast U.S. Corridor as the impetus for new transit in Baltimore, even while we've given up on expanding our own region's rail transit system. Building a great train station in West Baltimore at the end of the Franklin-Mulberry "Highway to Nowhere" is the key.

The rationale goes like this. Starting with the 2002 regional rail plan, transit planners believed that a comprehensive rail system throughout the region was necessary to achieve a "critical mass". They rejected the concept of incrementalism as much as possible. They saw the failure of "transit oriented development" and the stagnant rail ridership throughout the system as explanations for why Baltimore needed a D.C. Metro kind of major comprehensive system. With the $3 billion Red Line, it was all or nothing, and even if all of it had been built, many more billions of dollars would still be needed to complete the system before success could be achieved. Even when Governor Hogan killed the $3 billion Red Line, they refused to even consider anything less.

But a different kind of "critical mass" has been emerging over the past several decades. The suburbs are now a sideshow. The traditional linkage between the city and suburbs is being gradually replaced by a new linkage between Baltimore and the other cities of the Northeast Corridor - Washington, Philadelphia, New York and in between. And instead of daily 9 to 5 job commuting, the new linkage emphasizes mostly independent employment, along with occasional face-to-face activity in the different cities. Much of this is fueled by widening disparities in the cost of living among these cities, so that long distance encounters make more economic as well as cultural sense.

This concept has long been recognized by planners for the Penn Station area. The surrounding "Station North" neighborhood has been marketed to people who make frequent, if not daily, trips from Baltimore to Washington, but the success has only been modest. Station North didn't really take off until its emphasis was shifted more recently to culture, arts and education, fueled by expansion of the nearby Maryland Institute College of Art and University of Baltimore.

This follows a long proven principal: Any successful urban neighborhood needs a diverse mix of activities and a strong quality of life, regardless of its other reasons for being. So fledgling "Station West" which includes the West Baltimore Station should strive to emulate "Station North" as a  neighborhood, which includes Penn Station. Of course, the neighborhoods have virtually nothing in common except train stations, but that makes them even more complimentary.

So start with the train stations. The new West Baltimore Station should be designed to be an icon, just as Penn Station is. It won't have the historic beaux-arts architecture of over a century ago, but it will have the advantage of being a clean slate where contemporary style can be free to express itself. What must be avoided is building just a cheap train platform plus bare-bones facilities. The attractive new Camden Station which the MTA has just completed at Camden Yards has the right concept, but the West Baltimore Station should go further because it must play the role of a neighborhood anchor.

Here's an idea: A few years ago, the zeal to extend the iconography of Penn Station was perhaps overdone with the installation of the new Man-Woman sculpture in front of the station. Many people complained bitterly about how this contemporary sculpture was totally in conflict with the historic beaux-arts look of the station itself. This controversy demonstrated the power of art and iconography. So let's use this same power to promote the West Baltimore Station. When the new station is built, the Man-Woman sculpture should be moved to Station West to allow its iconic value to achieve better integration with its surroundings.


The sculpture would continue to be associated with train travel, but now it will be able to do so in a more harmonious way. And it would be "good riddance" for many advocates of Station North.

Beyond that, what the new Station West neighborhood needs is to create logic out of what is now the  illogic and destructive force of the obsolete "Highway to Nowhere". This should not necessarily be done by destroying the illogical or destructive past, but simply by making it work. History is not neat and tidy. That's why a "Walk of History" could be part of what replaces the highway, as discussed in a previous blog article. Various other art objects that didn't work in other parts of the city could be made to work here.

Most importantly, Station West must be made into a true neighborhood, with real residents and real life rather than just parking lots. But every train station area has its own strengths and weaknesses which must be dealt with. Station West is closer to Washington, DC than is Station North, so that may be a key advantage to some people. It provides abundant free parking, unlike Station North, but this may only be a small relative advantage, since the nearby Halethorpe or BWI Airport stations offer much better parking and auto access, especially in the long run.

Rail service will be expanded

The whole way that train service is marketed will change in the future. The distinctions between MARC and Amtrak - commuter and regional rail - will be blurred. The Baltimore Metropolitan Council long range plan considers the MARC rail service area to be expanded all the way from Northern Virginia to the south (where it would serve the new Amazon headquarters) to Philadelphia to the north.

Station West must find its role in all this, just as Station North has. There's also "Station East" to consider, even though that emerging neighborhood east of Hopkins Hospital doesn't even have a station now. Then there's a possible Magnetic Levitation train system, and - who knows - maybe even hyperloop. Transportation is always evolving and progressing.

And there's no reason why the Red Line plan couldn't be resurrected in some alternative guise to serve Station West, which in turn, could make Station West much more connected to downtown than Station North is. This need not be dependent on some multi-billion dollar comprehensive rail plan such as the 2002 plan.

Incrementalism will certainly play a role. It could start as simply a shuttle bus line that takes advantage of the lack of traffic conflicts inside the "Highway to Nowhere" ditch. One of the justifications for not knocking down both of the "Highway to Nowhere" bridges over MLK Boulevard would be to accommodate buses between the West MARC Station and downtown. This service would be far better than the Charm City Circulator from Penn Station to downtown, which is really just a redundant replication of MTA bus service. Beyond that, the west shuttle could be upgraded to a streetcar line, then part of a streetcar system, and then part of the light rail system, possibly connected to the existing central light rail line on Howard Street. It could even grow into a facsimile of the Red Line extending all the way to suburban Woodlawn and the CMS and Social Security complexes, and even to the east side as well.

In any case, the eventual long range rail transit system of the future won't necessarily be built as it was envisioned in 2002, but all possible options need to be considered.

It all begins by building a new West Baltimore train station that can truly serve as an anchor for a new Station West neighborhood. And while Station West should strive to outdo the initial premise behind Station North, all neighborhoods ultimately develop their own personalities based on their own residents. One could call it the "Creative Class" phenomenon invented by Richard Florida - except that people,  neighborhoods and cities have always worked to define each other.
Source: baltimoreinnerspace