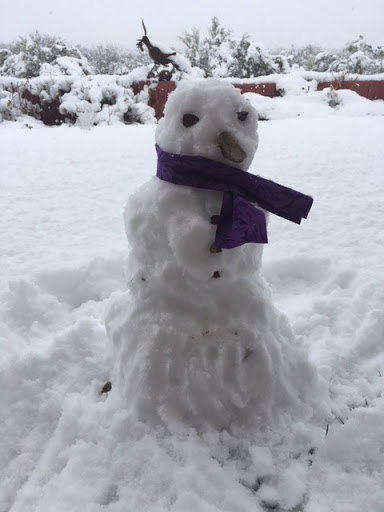 Well THAT was fun!!  Skiers should be really excited because this was some very nice dry snow, perfect for screaming down the mountain.  Someone said I should make a snowman.  That's all good and fine if it's not YOU with freezing hands.

This took all of 45 seconds to create before my fingers froze.  He's very small because I didn't want to mess up my entire beautiful snow-covered yard. 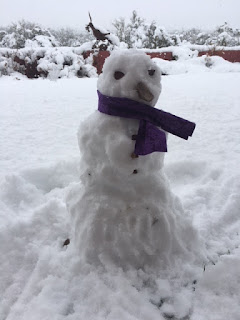 It was all good until Cooper spotted him out the window.  He's pretty smart this kid of mine ... he knew something was different, so he barked up a storm.  Who's there????  I opened the door and he went running out, growling the likes of which I've never heard before.  GET HIM!!!  He came to a sliding stop at the icy patio edge, backpedaling as fast as he could.  Deciding there was no threat, he finally just walked away.
We went through that whole scenario again when Miss Jessie discovered something weird in the yard.  She slid OFF the patio and went nose to nose with the snow.  I didn't have to worry about yellow snow after that because it was only deposited on the snowman!!!!! 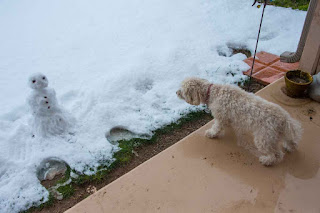 Lucky for her, the palm fronds covered my little dove's nest perfectly, keeping her dry as could be. 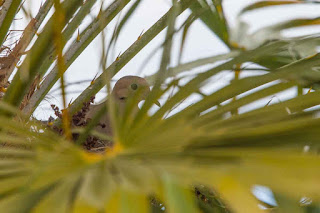 In the end I had 6 to 12 inches piled up around the yard.  Most desert plants aren't made to hold this kind of weight, making them all droop down to the ground.  I could even see the train tracks which are normally not visible. 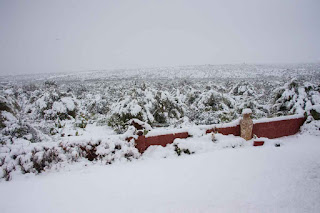 Although it slowed the train traffic down quite a bit, I think probably six went through in spite of the driving snow.  I can't say as much for the Post Office.  Two packages should have been delivered yesterday, but neither arrived.  So much for their motto. 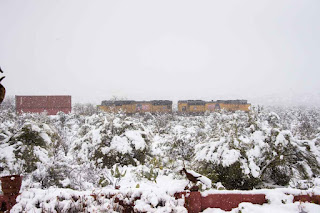 When it came time to head to the store, I couldn't wait to get out and play.  I put my Jeep in 4WD and headed out the driveway.  Even at that, I had trouble getting turned around.  At the dead-end turnaround, I made a couple of passes, you know, just trying to get enough momentum to get up the steep hill to the road above.  I was smiling all the way.  What's that song?  Slippin' and Slidin'?? 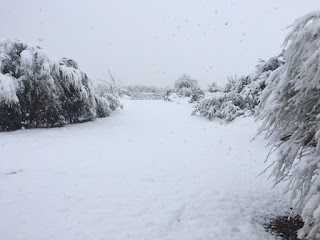 I made the rounds of all the big parking lots, but someone had already beat me to it.  It would have been a kick going down the Chance driveway, but it looked so pretty, I decided not to mess it up. 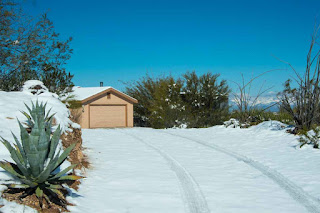 The trees and bushes were gorgeous, but alas, all the snow has now melted, except for my back yard. It seems it's in shade most of the day, and in spite of yesterday's sun, it's still covered with about 5 inches of snow.  There will be no more snow eating I'm sorry to say. 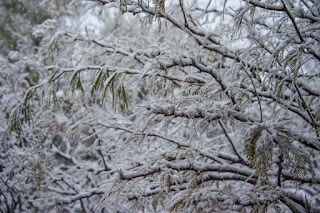 At 30 degrees, it's still COLD.  If we're lucky, it will get all the way up to 60 by 3:00.  OH BOY!!  Downright balmy!!!  Today would probably be a good day to house clean since all the good road snow has melted.  It's also time to get my gourd carving table set up.
Source: kissackadventures