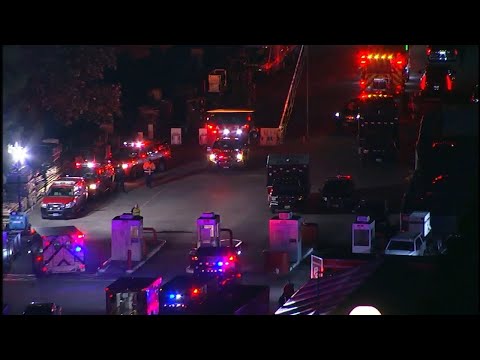 Last night (November 5), tragedy struck at the first night of Travis Scott's third annual Astroworld Festival. An ongoing investigation is looking at the events surrounding the sold-out event at Houston, Texas' NRG Park. Local affiliate ABC 13 reports that eight people have died at present, and hundreds were injured due to unanticipated circumstances in the crowd late Friday night. Over 50,000 people were believed to be present at the concert slated to feature Travis, SZA, Tame Impala, Chief Keef, Master P, Don Toliver, Lil Baby, 21 Savage, Baby Keem, Young Thug, Earth Wind & Fire, and more. According to Houston Fire Chief Samuel Peña, shortly after 9 pm local time, many attendees began pushing towards the performers as Drake made a surprise appearance while the Grammy-nominated host Travis Scott was on stage. The two men are longtime collaborators. As the crowd reportedly compressed, panic erupted. In the ensuing movement, several people were injured, prompting Scott and partner Live Nation to halt the event. Summer Jam 2015: What the State Police Could Learn From Travis Scott About Crowd Control (Video) A local official revealed that among the dead is a 10-year-old attending the show. More than 300 were hospitalized, with 11 people receiving CPR. Houston Police Department Executive Assistant Chief Larry Satterwhite told ABC 13 that more than 500 law officers and security were present at the Texas show. "Once we started having the mass casualty incident, they were starting CPR on several people, and it happened all at once," Satterwhite said in a statement. "It seemed like it happened over the course of just a few minutes. Suddenly, we had several people down on the ground experiencing some type of cardiac arrest or some type of medical episode." Harris County officials are still releasing the names and causes of death surrounding those deceased. Travis Scott’s Family Ties To DJ Premier & Love Of Thrash-Metal Gets Revealed (Video) Officials have now canceled the remainder of 2021's Astroworld Festival. Neither Travis Scott nor Drake have yet to release a statement at this time. Ambrosia For Heads attended HOT 97's 2015 Summer Jam festival in New Jersey when Travis Scott performed. In a captivating moment there, he urged security to let fans climb over barriers to be closer to the stage. During his set, the Epic/Sony Records performer crowd-surfed and told show-goers that while he had his private security detail, it was in place to make sure that a good time was had, not prevent one. That evening later took a negative turn, following Scott's set, as state police and security denied entry for many fans. AFH extends condolences to the families and those hurt by the events.
Source: ambrosiaforheads.com