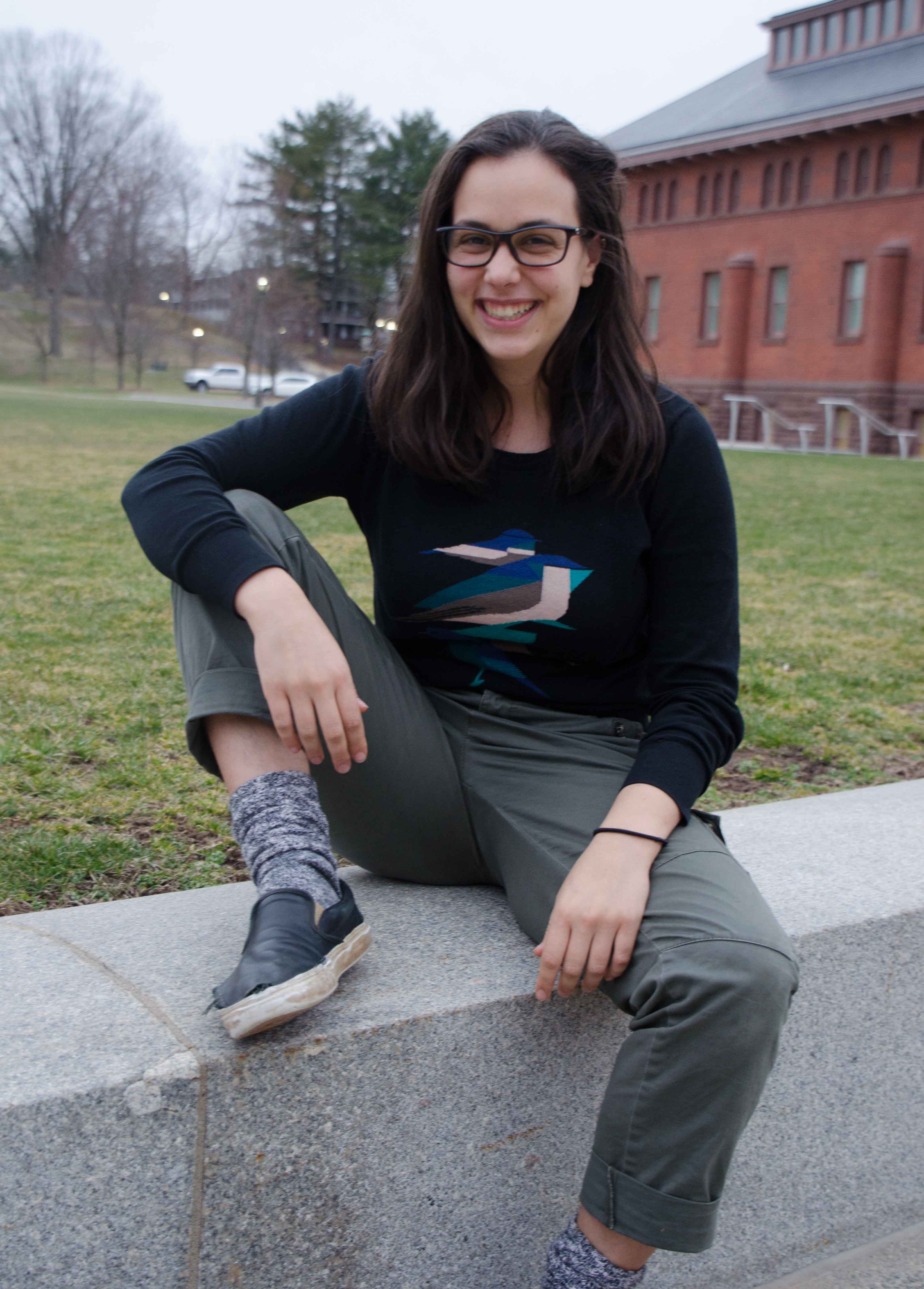 Emma Rose Borzekowski ’19 seems to be involved with half of the acronyms at the University. Through her involvement with the College of Social Studies (CSS), Working for Intelligent Landscape Design at Wesleyan (WILD Wes), and the United Student/Labor Action Coalition (USLAC) and as a co-founder of Peer Advocates for Student Workers (PAWS), Emma Rose has thought deeply about her politics and the impact they can have on campus. The Argus sat down with her to talk about the current state of Wesleyan activism, her thesis, and why she doesn’t have a Facebook.

Emma Rose Borzekowski: Yes! I’ve really liked it. I think people are often wary of it because it has a reputation for being really white or male. It is deeply Eurocentric, and I think the curriculums you read can reinforce [the idea] that this is a canon of white enlightenment thinkers. But, I found that really really useful for then going into other classes and learning about the critique of these enlightenment ideas and understanding this critique a lot better. And I’ve also really loved having the community. The stereotypes and depictions of CSS can turn people away from it, but I’ve found a really loving community of women. One of my jobs there is a TA right now and seeing the ways that the incoming class of sophomores is really supportive of each other has been great.

A: You’re involved with a lot of activism. How did that come to be? What background did you bring to it and how has CSS and other academic work intersected with this?

ER: I feel hesitant to say that I’m super involved because I feel like that’s always relative. My freshman year, I got involved in USLAC because I wanted to be part of a group that was doing actual productive work on campus, doing something that has important, material outcomes. Especially during my freshman and sophomore year, when Trump was elected, I was really disillusioned with what I could do politically. Finding people in the labor movement, especially on-and-off-campus adults, who were involved with these projects was really inspiring for me. [They showed me that] you can go fight for better healthcare with your coworkers, and that can be a really important thing and build solidarity.

A: Sort of bottom-up politics?

ER: Yeah, and I come to this from a communist perspective. [laughs] CSS has actually been surprisingly useful because I’ve read a lot of theory that’s informed my politics. I wouldn’t necessarily say that my values have shifted, but the tools I have to articulate those values have definitely improved. I can look at the work that labor groups are involved in and [evaluate] them critically and articulate what I do and don’t like about them in a way that I couldn’t if I wasn’t made to read all of this stuff.

A: Did you grow up with this type of politics? I’m realizing I don’t even know where you’re from.

ER: I’m from D.C., and I think that there is a culture of political engagement there. I also grew up in Hasher Hatzair, which is a Jewish Zionist youth movement. I think I’ve moved away from the Zionism in the movement [and] have looked at it more critically…. From a very early age, I was [basically] indoctrinated into this cult; it’s a century-old Jewish socialist movement. Since coming to college, [I] have rethought those politics but am clearly impacted by the things I was taught since I was eight. I mean we took all of our money and put it in a pot and put all of our candy there, too. I never had my own candy. Everything was shared.

ER: I feel both always. And I think that the critiques of segregation in Wesleyan activism are super true, but I also think they’re reflective of the way Wesleyan operates as an institution. Something I’ve been learning in the last year is the way that the University is structured and acts as an institution reinforces segregated spaces. This means that the way that activism functions here will mirror that—which isn’t an endorsement or condemnation, it just feels important to look at. Even if student activists are trying to be independent, we are still shaped by the place that we live and work and that shapes and produces us.

Something that makes me really hopeful about Wesleyan activism is that people come into it and have a lot of idealism and have a lot of passion. I don’t think it’s helpful for anyone to say “Oh, these first years don’t know how to organize.” I don’t think that’s a helpful critique and I think it dismisses that there is a lot of energy and also a lot of good ideas and expertise. A lot of people like to return and ground the activism that they are doing in situations of different privilege rather than solidarity and universal uplift. So I’m interested in when people make critiques of structures that create privilege rather that privilege itself. I think that can be productive, but the way that I think we make progress is by attacking structures…

A: So not individuals?

ER: Yeah, I mean, make fun of individuals as much as you want—I’m not particularly concerned with civility. But I think it is distracting when we get so concerned with identity markers as opposed to the things that produce them. I want people to be willing to engage with everyone around them and look at successful campaigns and grow from them. And I want people to be more strategic in their actions. Sometimes we do high visibility actions but then they don’t build on each other. I think we need to sit down and look at how power exists on this campus and sit down and make a plan.

A: It seems really hard to maintain momentum.

ER: Yeah, and I think one of the reasons I love USLAC is that we have been so lucky to have support from other people in the labor movement who have taught us that. But I’ve seen [other, unrelated] really amazing work that also does this like “Is This Why?” which built over time and used escalating tactics to make change.

A: Okay, so big topic shift: you don’t have a Facebook, why not?

ER: Honestly, I just think it would take a lot of my time.

A: Do you have other social media?

ER: I have a Twitter, and I spend a lot of time on it. I used to have a food Instagram that was never very good. I just don’t have Facebook because…at this point, why bother? [Anyways] Facebook is over, my sister is 13, and she’s on Instagram and Snapchat.

A: It just felt unnecessary?

ER: Yeah, and it’s also a really good excuse, like if someone doesn’t invite me to a party I can be like “Oh, it’s because I don’t have a Facebook and I don’t have to confront…” [laughs]

A: But so many Wesleyan events happen on Facebook! And you just deal with it? It sounds like maybe a less-hectic, nicer, more-intentional way to navigate Wesleyan?

ER: Honestly, that’s really true. One of the reasons I don’t have it is that I’m really busy. I feel like on a given weekend I already have so many things I want to go to: friends’ parties, everyone seems to have their birthdays at the same time, and the concerts here really come in waves. If I had a Facebook I would be so overwhelmed.

A: You’re working on a thesis? What’s it about?

ER: It is about undergraduate student worker unionization efforts! That’s actually why I wanted to do this interview other than that I’m a narcissist. [laughs] I want people to know that if they are student workers on campus they should absolutely feel free to reach out because I’ve learned a lot about tactics that student workers use both to unionize and for shorter-term, single-issue campaigns. This is kind of related to PAWS work that I do.

A: Could you tell us more about PAWS?

ER: I run Peer Advocates for Working Students with Tay-shaun Lawrence [’19]. The purpose is to support student workers in their workplace with any issues that they have. So that ranges from individual problems that they want to talk about with somebody, to finding solutions that involve collective action and ways that student workers can mobilize to make on campus working conditions better. Right now we’re working on a few projects that I can’t fully get into because they’re ongoing. But we’re also working on a University-wide effort to raise the minimum wage through a graduated pay campaign. The idea is that every semester you work you get paid a little bit more [through a] raise in your hourly pay. And the idea behind that is that if you’ve been working somewhere a long time you will be asked to take on more responsibilities or a mentorship role, whether you agree to it or not…And we want to make sure that people are being paid for all of the work that they do. This is a way to raise minimum wage, which should be commensurate to how much it costs to live here. That’s been really important to me this year. I’ve been talking to a lot of student workers and being involved in workplace organizing while also working on my thesis and seeing what has worked at other universities and what could work here. Anyone and everyone should feel free to reach out.

A: Do you have advice that you would give to your freshman self or incoming freshmen now?

ER: Before I came to college, I was told by a lot of friends that they had met their friends sophomore year. And everyone kind of goes into orientation being really stressed about finding people…Knowing that you’re going to be at this place for four years [really helps]. Sometimes you think of [college] as a really transient place, but it is also a place that you live for a long time. So I think being patient with things is good. But don’t let that patience be complacence. Take advantage of everything here. Try new things. Everyone gives that advice to freshman but it is such good advice. People always say don’t sign up for too many mailing lists—I’m signed up for every mailing list on this campus, and I love it.

A: Do you have a massive spam folder or something? How do you deal with all those emails?

ER: I archive. I regularly have zero emails in my inbox because I’m pretty good at getting rid of them when I see them, but I love knowing what is going on. That’s why I don’t have a Facebook.

A: I was going to say, that sounds correlated.

A: You did email me back instantaneously when I asked you to do this interview.

ER: Email is the sexiest form of communication! [laughs] I love my email. Anyways, take advantage of everything this university offers. This is something that I learned as my time here has progressed…. I had a friend who went to so many conferences and [really] showed me that at Wesleyan, there is a lot of money on the table. And [also they have] things that aren’t money, like there’s an ice skating rink! Just take advantage of all the amenities that come with living here. Go to the conferences you want, eat the food you want, enjoy the ice skating rink, and along the way make good friends and be patient with yourself.

Madeleine Matz can be reached at mmatz@wesleyan.edu.