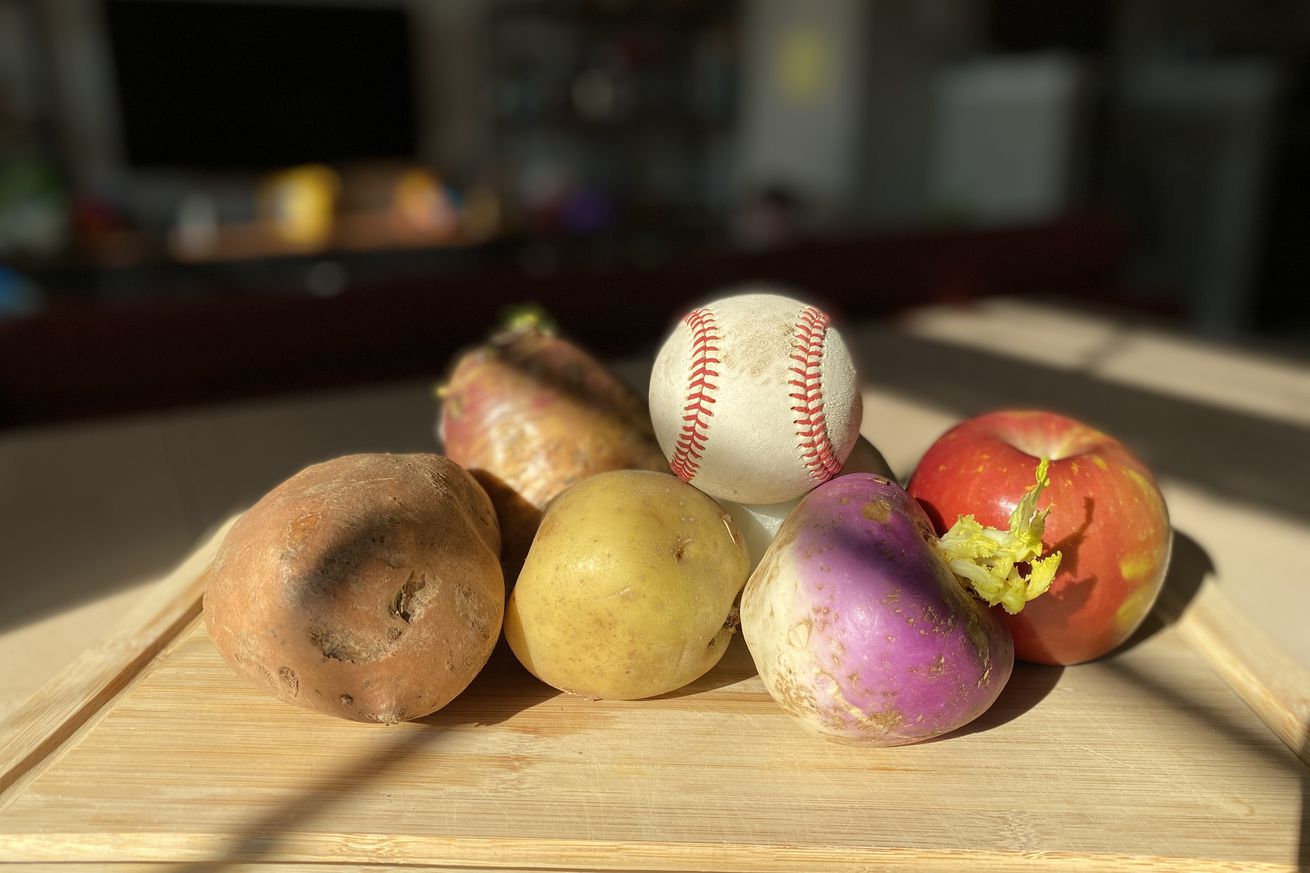 What vegetables are best for carving into baseballs? A Secret Base investigation

Dave Bresnahan pulled off a legendary stunt by carving a potato into a pretend baseball. Here we follow in his footsteps.

We recently related Dave Bresnahan’s Potato Caper, a fake-baseball stunt which got him released from his AA team way back in 1987. Bresnahan’s idea, inspired by the goofs of baseball deep past, was to carve a fake baseball from a potato, throw it away in the hopes that the baserunners might try to advance, and then tag them out with the real baseball.

But there’s one important, unanswered question: it’s all well and good to carve a fake baseball out of a potato, but is it the best option for faux-baseballs? Are potatoes not a bit too moist? Might other root vegetables work better?

To help solve this problem, I spoke to Eater Chicago’s Senior Editor and Chicago White Sox fan Ashok Selvam. Surely the food experts at Eater would know enough about vegetable carving to get to the bottom of this.

According to Ashok, what we’re going to want to look for is weight, mushiness, spoiling and color. His initial suggestions were ube and especially daikon, a kind of radish. However, on account of the daikon (drawing below, because I think it’s cool) being probably unavailable to your average minor league backup catcher in the 80s, we had to find some other options.

Ashok points out that due to their moisture content potatoes can spoil and the smell might give the game away, especially if you do Bresnahan levels of preparation. Keeping a carved potato around for two weeks sounds unpleasant in the first place, and even if one imagines that home plate in a AA baseball game smells ... not good, the aroma of rotting potato might cause something of a stir.

What we really needed is for someone else to have solved our vegetable carving problem for us, to have found something with the right consistency and then worked out how to carve and display it with minimal spoilage. And thus Ashok introduced me to the Night of the Radishes.

The Night of the Radishes is a festival in Oaxaca, Mexico. It involves, uh, radishes. If you’re anything like me, the word ‘radish’ invokes the mental image of a fairly small red vegetable, nowhere near as big as a baseball. But radishes, it turns out, are wild and wonderful and can get rather a lot bigger than the little summer radishes I’m used to.

The Night of the Radishes takes full advantage of the spectacular diversity of radishkind. The radishes used in the festival are allowed to grow long past the time they would have ben harvested, which lets them reach gargantuan proportions. What about the spoiler problem? “There are techniques to making sure those Mexican radish carvings don’t wilt, so perhaps that could applied to the fake baseballs? Like keeping them in a humidor.” Problem solved.

While in theory the answer to our baseball-carving question — thanks again, Ashok — is “a monster radish,” theory is only half the game, and I don’t think we’re going to be able to grow Custom Monster Radishes for our fake-baseball needs. We have to do some experimenting. With that in mind, I asked SB Nation designer Tyson Whiting to go to town on a collection of fruits and vegetables. Which would be our faux-baseball champion?

First, an important aside about the reference baseball. Take it away, Tyson:

Harold Baines hit this home run ball to me June 21st 1998 I was 9 years old. My grandfather was a wanna-be gangster from Salt Lake City. He would have been a real one if he didn’t have a heart of gold, but he had connections to the most random people all over the country. He knew Tim Johnson, the Toronto Blue Jays coach in ‘98 and we went down to meet him in the dugout. It was cool. Early in that same game my Dad told me to pay attention because Baines was going to hit it right to me. And he did.

The ball blasted out to right center field in Camden Yards and bound off this poor lady’s fingers right in front of me. The ball landed at my feet, I picked it up jumped around, and every one cheered. 15 years later I finally got him to sign it. At the time, he was the assistant batting coach for the White Sox, so we called him over. He was probably surprised three grown men were yelling at him to come over and not any of the players. He signed the ball and tossed it back, and then we watched the Nats get stomped by the White Sox.

The ball then sat in our family living room for years. And then one day I come home to find the ball sitting in the dog bed. Sans autograph. The exterior nibbled to a fine grain, soft to the touch. You’d never know it was a major league ball at all unless I told you. I asked my mom if she had any clue what had exactly happened, “I saw her with it … but figured it was just a dirty old ball.”

Canine tragedies aside, it’s time to see what we could make of our assorted produce. By the way, radishes didn’t make the list, because we couldn’t find any big enough to be a plausible baseball (Sorry, Ashok.). All grades on the 20-80 baseball scouting scale, with seams superimposed as a visual aid. Tyson said he wasn’t about to ruin his red markers drawing on vegetables for me, which is fair enough.

There you have it: the rutabaga is triumphant. Obviously, if you have access to giant radishes, you should follow Ashok’s advice and use those, but if you can’t find one and wish to pull off a Bresnahan, the rutabaga should be your choice of vegetable. Feel free to experiment with making your own baseballs, and share in the comments.

What vegetables are best for carving into baseballs? A Secret Base investigation