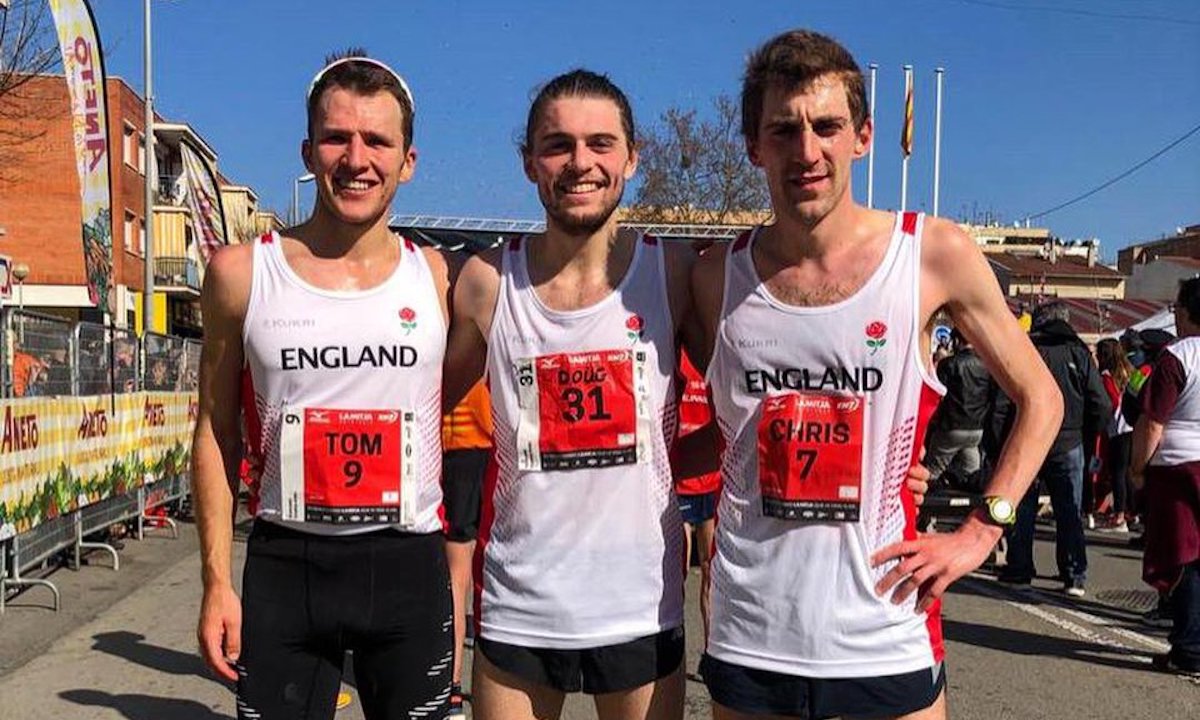 The Cardiff ace impressed once again with a classy victory at the Wokingham Half Marathon, Team England shone in Spain while races in Brighton, Carsington and Battle and national cross countries in England, Wales and Scotland produced eye-catching results.

English National victories were clinched by Emily Hosker-Thornhill and Mahamed Mahamed on one of the driest courses seen for years at Leeds’ Harewood House Estate.

To catch up on all the national cross action read the full report here for the English National and here for the Welsh and Scottish championships.

As if all that cross country action wasn’t exciting enough, the Wokingham Half Marathon produced some stunning results on Sunday morning (February 24).

Cardiff’s Matt Clowes ran seven half marathons last year, winning all but two of them (one of them was the Grannollers Half, more on that to come).

His winning time in Wokingham was a scorching 64:06, not far off his impressive 63:26 best from last year’s Cardiff half.

The popular Englishman, who has made Wales his home alongside fiancé and fellow athlete Gina Paletta, is not far behind Olympians such as AFD’s Andy Vernon on the roads, and could well start to earn the interest of UKA selectors if he continues his winning ways.

While Clowes’ win was something to behold, so too was runner up Richard Allen from Aldershot, who annihilated his 68:59 PB from 2017 in his first race since the Liverpool Cross Challenge back in November last year. Allen sliced an astonishing 224 seconds off his old lifetime best with a superb 65:15 result, holding off a strong challenge from former GB marathon international, Blackheath & Bromley’s Scott Overall, who ran 65:25.

Northampton’s Hayley Munn ran her fastest half marathon in three years when she clocked a speedy 76:51 to take the women’s title in only her second race outing this year.

Munn was chased hard by Reading’s Naomi Mitchell, who ran a 77:14 for second place, while V40 Lesley Locks from Hart AC ran her quickest time for six years when she crossed the line in an impressive 79:02.

There were some fine results at the Grannollers Half Marathon in Spain too.

Notts AC’s Doug Musson was the first Brit across the line when posting a superb 64:55 on his debut over the distance, and on international duty too in his England vest!

Crossing the line 6th overall, Musson was just one place ahead of ultrarunner and Lewes AC star Tom Evans, who clocked a big one minute PB when he ran an impressive 65:21 lifetime best on a notoriously hilly course.

Fellow Englishman and Highgate Harrier Chris Rainsford was a notable 12th overall in 68:56. The British women were also in glittering form in Spain as Bristol & West’s Jenny Spink and Cambridge & Coleridge’s Georgina Schwiening finished within 11 seconds of each other in 36th and 41st respectively.

Spink’s 75:24 was her fastest in two years, while Schwiening’s superb talents are finally being recognised with this England call up, her 75:35 just seconds shy of her PB earned last year when winning the Cambridge Half Marathon.

Hallamshire’s Calli Thackery was also in action in Grannollers, posting a 77:43 result in 69th position overall.

The Grand Brighton Half Marathon also produced some top class results, with the first 11 men to cross the line all breaking 70 minutes and the first 14 women beating the 85 minute barrier.

It was all about the Paul’s on the podium in Brighton though, with Crawley’s Paul Navesey beating off competition from Kent and Ireland’s Paul Pollock and Victoria Park Harriers and New Zealand’s Paul Martelletti.

It is possible that Martelletti was just sandwiching this race in the middle of an even longer run, though, such is his mammoth mileage training up for marathons and ultras on a regular basis!

That takes nothing away from Navesey’s victory, which saw the Crawley man beat his old lifetime best by well over three minutes when he stopped the clock at 64:56.

︎ As always, amazing to put the hard work with the @abtraininggroup to the test!

︎ Lots of fine runs & PBs clocked by the group!

He adds this new half marathon PB to his 5k and 10k bests earned at Armagh and Chichester Priory, all posted this month!

Navesey beat off world class opponents in Pollock and Martelletti, with the two internationals clocking 66:35 and 67:06 respectively.

Track specialist Fiona de Mauny from Herne Hill Harriers was also in impressive form when she sliced nearly five whole minutes from her previous best when taking victory here in 80:25.

The V35 World Masters 800m gold medallist and 1500m silver medallist from last year’s championships in Malaga has clearly been enjoying some very strong long runs to make such a quantum leap in form over the half distance.

Arena 80’s Emily Proto was never far behind when she finished second in 80:46, while Fulham RC’s Rose Penfold took the third prize in 81:18.

Ultrarunner Holly Rush was in winning form over a much shorter distance when she took victory at the second Carsington Water Half Marathon in the Derbyshire Dales on Sunday (February 24). The Avon Valley V40 international was way ahead of her nearest rivals when she crossed the line first in 85:32, with Alice Whiley second in 87:51. Abingdon’s V40 Sarah Dudgeon took the third prize in 90:24 in her first outing over the distance since 2017.

Taking the top honours in the men’s race was Dan Robinson (no club given), who was convincing in victory in 76:18. He beat off competition from Peel Road Runners’ Ash Baldwin and Haldon Trail Runners’ Paul Sadler, who ran 78:37 and 81:02 respectively.

Sutton in Ashfield Harriers’ Michelle Willcocks and Hayley Gill took second and third in the women’s race in 87:21 and 91:57 respectively, while Roton RR’s Rob James (79:04) and Scott Thompson (82:07) also earned themselves podium positions.

There was more cross country action at the appropriately named Gunpowder Run at Battle in Sussex on Sunday (February 24).

Hailsham Harriers’ David Ayling sped round the tough 8k course in 28:50, just holding off Barry Buchanon’s charge to the line in 28:53.

The two men were well ahead of third placed Marcus Holloway, who posted a still strong 30:24 result.

Hasting’s Shannon Hopkins-Parry was all about the number three apart from her finishing position as she took the win in 33:33. Weald Tri Club’s Francesca Gardner was second in 35:43 while Rebecca Pickard made up the podium positions in third with a 36:36 result.

To catch up on all the top ten parkrun action from across the UK read the full report here.

Are you a fan of Fast Running? Then please support us and become a patron. For as little as the price of a monthly magazine you can support Fast Running – and it only takes a minute. Thank you.