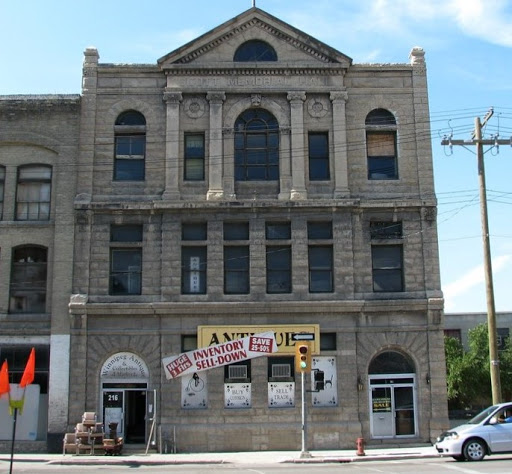 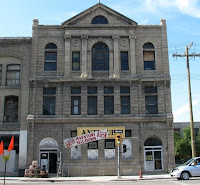 The Orange Order in Canada is as a Protestant fraternal organization that traces its origins back to the Orange Order created in Northern Ireland in 1875. Winnipeg had been home to a Loyal Orange Lodge since 1871.

By 1900, there were around 100 lodges across the province and the need for a new Grand Orange Lodge of Manitoba grew. In May 1902, it was announced that one would be built in Winnipeg.

Initial drawings, likely done by James McDiarmid, show an ornate, four storey building on a 50 ft x 90 foot lot on Princess Avenue at Rupert Street. Construction of the foundation got underway in the spring of 1900 and on July 12th there was a cornerstone laying ceremony.

Orangemen from across the province and beyond came to Winnipeg for the event. One newspaper estimated the number of visitors at 6,000. They marched from city hall down Main Street to Fort Garry Park at the Assiniboine River where speeches were made.

The location was symbolic as it was near the spot where Thomas Scott, an Orangeman from Co. Down, Northern Ireland, was executed by Louis Riel’s provisional government on March 4, 1870. Scott's death led to Riel’s exile and eventually to his own execution on 1885. The hall would be named the Thomas Scott Memorial Hall in his honour.

After the speeches it was back to the site of the new hall where the Grand Master of the Orange Lodge of Manitoba, Hon. D H McFadden, laid the cornerstone.

The project then ran into financial difficulty as the initial $35,000 construction estimate ballooned and the site laid idle for a couple of years. 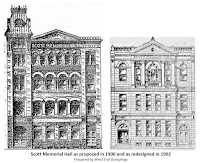 The issue of completing construction of the lodge was revisited in March 1902.

It was decided that a less expensive building was needed and design was pared down to what they could afford. Architect Samuel Hooper was hired to produced a new set of drawings which were presented to lodge members in June for approval.

The most noticeable change was the reduction from four floors to three. Other cost savings came when the Garson Quarry offered to donate the stonework for the facade and contractor Thomas Sharpe, a prominent Orangeman, agreed to have his company build it.

Construction got back underway later that summer and on the afternoon of March 4, 1903 the new Grand Lodge was formally opened with a large banquet to follow the next night. (The building was not quite complete, but March 4 was the 33rd anniversary of Thomas Scott's death and had previously set that as their target date.) 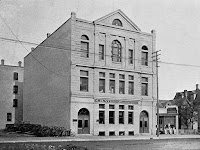 Manitoba Historical Society
As per the original plans for the building, the main floor and basement were rented commercially as a stream of income. The trade-off to get the new building constructed was that the second floor also had to be rented out. Initial tenants were: James Smart and Company, manufacturers of stoves and heaters, in the basement; a grocery wholesaler named Steele was on the main floor; and Stirling and Waller, wholesale clothiers, on the second floor.

The lodge occupied the top floor where there was a hall for at least 500 people, smaller meeting rooms, offices and a smoking lounge. To make additional revenue the hall could be rented out for outside events and played host to countless recitals, dances and receptions.

The hall also included a large mural of Thomas Scott. 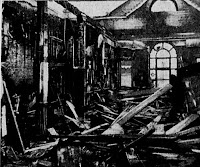 The building had a close call on January 10, 1943 when a three-alarm fire broke out overnight on the third floor causing about $30,000 in damage.

Earlier that evening there had been about 500 people in the hall at a dance. The fire started in the corner where the men's smoking room was located, so it was believed to have been caused by a carelessly discarded cigarette.

The lodge had insurance which covered the reconstruction of the hall. The building was rededicated on October 11, 1943.

During reconstruction the lodge may have been moved to the second floor of the building and the third floor was rebuilt as warehouse space. Recent photos by the city's Historic Buildings Committee show that the third floor is open space and that the Thomas Scott mural, which surely would have had to be repainted after the fire, is located on the second floor.

As with most fraternal and religious organizations, membership in the Grand Orange Lodge of Manitoba after the 1960s. The lodge was able to maintain such a large building thanks to revenue from its commercial spaces and that the hall was a well-used venue for numerous organizations.

Two later tenants of the building were the Winnipeg Irish Association in the 1980s and '90s and the Antique Exchange from at least 1990 until 2015.