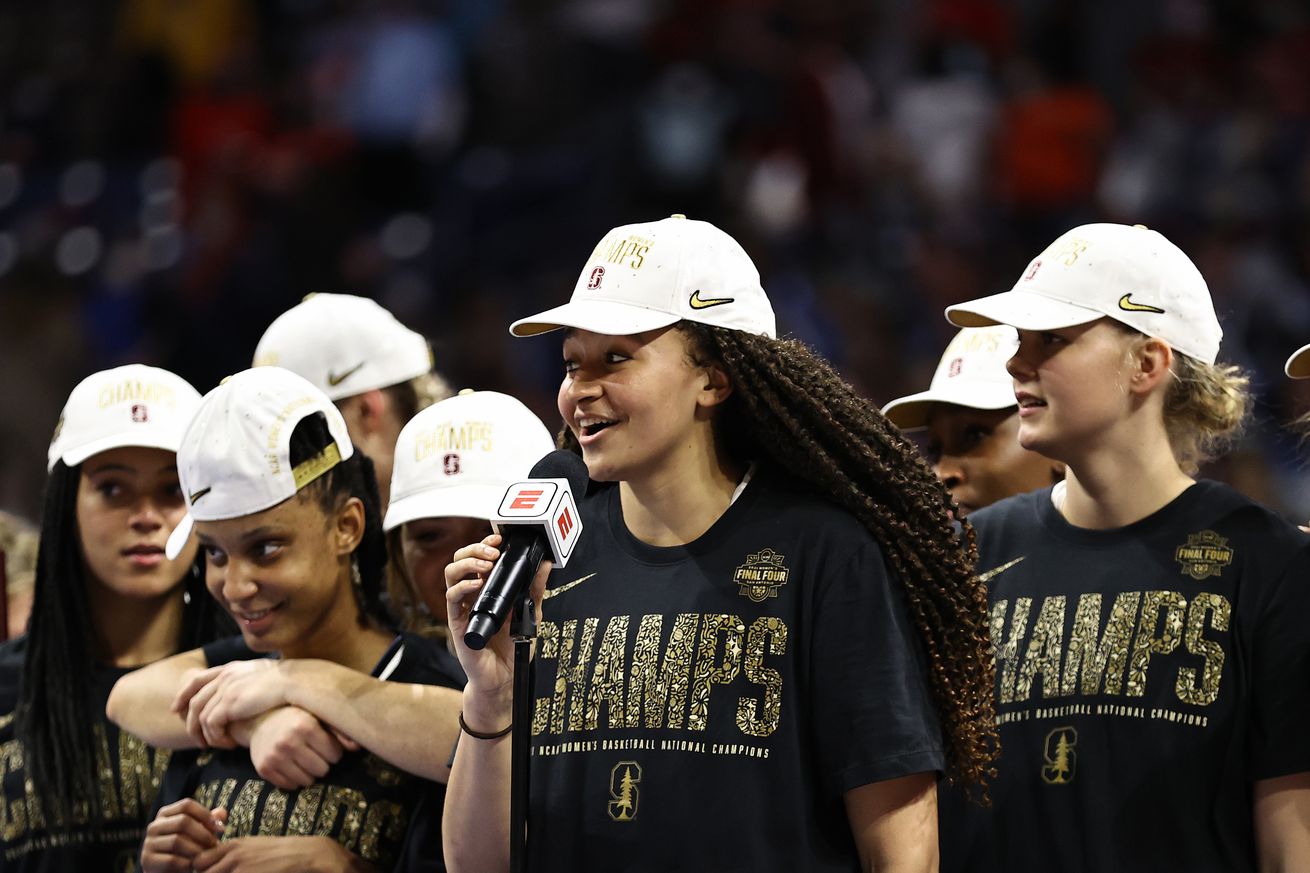 Haley Jones rises to the occasion for Stanford

Haley Jones scoring 13 of the team’s 23 second-half points, a plus-18 rebounding margin and great field goal percentage defense were the keys to the Stanford Cardinal’s victory over the Arizona Wildcats in the national championship game.

The Stanford Cardinal came out with balanced scoring in the first quarter of the 2020-21 national championship game on Sunday night in San Antonio and finished with fairly balanced scoring from six different players, though points were hard to find for both them and the Arizona Wildcats in what was a 54-53 victory for Stanford.

Haley Jones took over the scoring load late and led the Cardinal with 17 points, while Lexie Hull and Cameron Brink both had 10. Ashten Prechtel, Anna Wilson and Kiana Williams had seven, five and five, respectively.

Stanford’s first scoring lull came in the latter half of the first and Arizona started to build some momentum early in the second. Cate Reese was a catalyst for the Wildcats during that stretch, but Prechtel, who came up big off the bench in the Elite 8 and Final Four, made a couple key baskets as well.

Arizona reclaimed the lead it had one minute and 22 seconds in with a Shaina Pellington bucket at the 4:53 mark of the second. Brink quickly gave Stanford the lead back with a layup and Stanford responded with a big run like it had the first time Arizona took the lead. And, again, no one player completely took over for the Cardinal.

That changed in the third when Jones scored the team’s final six points to account for half of its points in the period. The Wildcats managed 16 points in the frame to cut their deficit to three entering the fourth. Arizona superstar Aari McDonald, like Jones, recorded half of her team’s points. So it started to become a bit of a Jones vs. McDonald duel.

Jones took on even more of the scoring load when she scored seven of Stanford’s 11 points in the fourth. Brink had the other four. Jones, who made the game-winning shot against South Carolina in the Final Four, again came up clutch and lived up to her status as a No. 1 Hoop Gurlz recruit. The sophomore’s freshman season was affected by injury and she was not Stanford’s leading scorer this year with 13.2 points per game, which isn’t a ton for a versatile scoring superstar like Jones. But she came up big in her first NCAA Tournament and was named the Most Outstanding Player.

Stanford led by as many as nine early in the fourth, but Arizona made it a one-point game in the end. Jones’ 3-point play with 2:24 left accounted for Stanford’s final points and it was just enough to deliver the victory.

After the game, Arizona head coach Adia Barnes said that a game never comes down to just one play at the end, which in the case of last night’s contest was an Aari McDonald missed 3-pointer at the buzzer. Barnes pointed to the fouling of Hull on a 3-point make with 2:45 to go in the second as another play that contributed to the loss. Hull’s made free throw made the score 26-21 Stanford and her four points on that a play truly ended the momentum of Arizona’s comeback at the time in a way that Brink’s lead-changing layup with 4:26 to go in the quarter did not.

Stanford attempted just two free throws in the contest, compared to Arizona’s 13-of-18 effort, which included an 8-of-12 showing from McDonald. Another stat that really stands out is Stanford’s 21 turnovers compared to just six for the Wildcats. The Cardinal still won the game in spite of that.

Stanford held a huge advantage on the boards (47-29) and had a 42.1 to 28.3 edge in field goal percentage. The 3-point shooting was even with Stanford shooting a slightly better percentage, but Arizona making two more triples.

Stanford averaged 81.8 points in its first four NCAA Tournament games before averaging 60 over its final two. It wasn’t the best offensive effort in the final two rounds, but credit Haley Jones and Stanford for rising to the occasion when the games were on the line to secure a national championship.

This win was a culmination of 29 years of great players. ⁦@Nnemkadi30⁩ ⁦@chiney⁩ react to the ⁦@StanfordWBB⁩ National
Championship win. pic.twitter.com/O6fjkgXjNP

Haley Jones rises to the occasion for Stanford