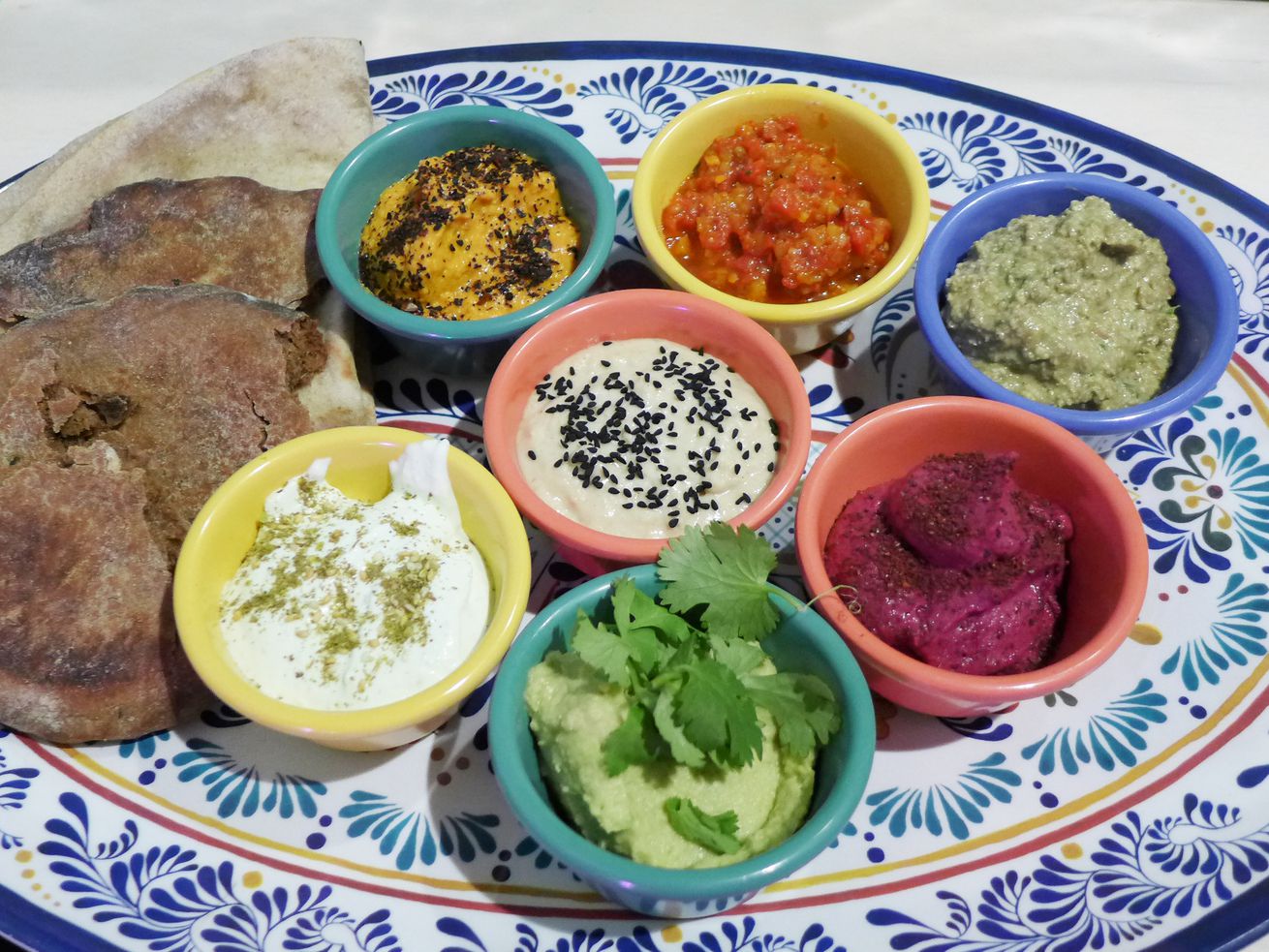 A selection of Middle Eastern bread dips at Williamsburg’s Samesa

Who doesn’t love a dip? Found all over the world, and served alongside flatbreads, crudite, shrimp crackers, tortillas, and risen loaves, they function as snacks and appetizers, but can also transform the objects being dipped into a full meal. Put several dips together and you have a feast. Cherished especially by vegetarians and vegans, they can also readily satisfy a carnivore, and what could be more exciting than sitting down at a picnic and finding the tablecloth arrayed with dips, including such famous ones as baba ghanoush, tzatziki, and guacamole? Their durability has caused them to be key players during this coronavirus epidemic, because once made and properly refrigerated, they keep for days… and even get better.

Here, then, are 10 favorite dips — or dishes that deeply involve dipping — each linked to an exceptional restaurant still open and providing it.

Eggplant’s “highest and best use,” as real estate professionals are prone to say, is in dips, and the number of examples throughout the Mediterranean and Middle East is legion. Baba ghanoush is the most famous, roasting the “garden egg” and then pureeing it with tahini, resulting in a rich texture and smoky taste. At Yemeni cafe Queen Sheeba the dip is terrific, paired with charred flatbreads made on the premises and hot out of the oven. 317 W 141st St, between Edgecombe Avenue and Frederick Douglass Boulevard, Strivers’ Row

Yes, the Greek menu flaunts probably the largest range of bread dips of any national cuisine, totaling over a dozen in all. Some, like tzatziki and taramosalata are well known, while others like skordalia and pantzarosalata are far more obscure. The latter deliciously incorporates roasted beets, garlic, wine vinegar, and sometimes yogurt and walnuts into a smooth paste perfect for dipping, and tasting of earthiness and sweetness. The version at Loukoumi can be ordered individually or as part of a blissful dipping combo, served with warm pitas. 45-07 Ditmars Boulevard, between 45th and 46th streets, Astoria

Caponata at Joe’s of Avenue U

This chunky, tart, and tomatoey mince of eggplant, celery, capers, pine nuts, and currants constitutes a quintessential part of the Sicilian menu. Located in the somber-sounding Brooklyn neighborhood of Gravesend, Joe’s makes some of the best, delivered in profuse quantities. While it may seem advisable to simply spoon it up, it functions better as a dip or relish, scooped with croutons or slivered raw vegetables, or simply spread across a warm wedge of focaccia. 287 Avenue U, between McDonald Avenue and Lake Street, Gravesend

Oaxaca and Chihuahua cheeses are commingled in this warm casserole, which is a favorite of Mexico’s dips for soft corn tortillas or tortilla chips. The version at Fonda is studded with chorizo and sided with a tomatillo salsa verde. Or, for vegetarians, mushrooms or mild chile strips may replace the sausage, with no diminution in the excitement. An interesting phenomenon is that the dip solidifies with passing time, despite the ability of the crockery to retain heat, making each dip a different experience, texture-wise. 40 Avenue B, between 3rd and 4th streets, East Village

I’ve had guacamole in French restaurants and I’ve had it in Indian and Japanese restaurants, too — guacamole is the certainly one of the most global dips in the world, along with hummus. Yet despite elaborate build-outs of the dish at ambitious places, the simplest and most recently prepared is the best. Accordingly, seek it out where it’s made tableside, as at Purepecha, a restaurant that specializes in the dishes of Michoacan. Ferried to the table in the metate it was made in, the guac couldn’t get any fresher, or sparkle with more flavor. 213 Smith Street, between Baltic and Butler streets, Carroll Gardens

Pak Punjabi is one of those South Asian delis that provides groceries and notions, but also caters to the food-on-the-run needs of cabbies and other livery drivers. Manhattan is dotted with similar places, and the food is often wonderful. At these places, raita is the universal condiment, yogurt fortified with mint chutney or sometimes with minced cucumber or onion. It’s a perfect dip for naan, and gets dumped on the biryani that’s often the big-deal meal, when more than a snack is needed. And it’s the indispensable accompaniment to a potato samosa, as is shown here. 50 Second Avenue, at 3rd Street, East Village

Usually made from chickpeas and tahini, laked with good olive oil, and sprinkled with herbs and olives, hummus is among the most versatile of viands. Served as an app or snack, swabbing it with flatbreads is fab, but hummus also serves as a staging area for roast meats and vegetables. It admits of many creative twists, and I once saw a Thai restaurant making it with pumpkin and serving it with shrimp chips. At Sami’s, it is presented in its most conventional fashion, dusted with spices and presented with a stack of toasted flatbreads on the side. Get busy! 35-57 Crescent Street, between 35th and 36th avenues, Astoria

With the exception of the chorizo implanted in the queso fundido, the dips presented heretofore have all been vegetarian. But there are dips that also showcase meat, and Lebanese habrah nayeh is one of the most meat intensive. Not only does it contain beef, but it’s all raw beef, tortured into a fine paste, with a sprig of mint implanted in the top like a flag. Scoop and eat at Le Sajj, a Bay Ridge delight with the most complete Lebanese menu of any place in town. 8221 Fifth Avenue, between 82nd and 83rd streets, Bay Ridge

Northern Thai cuisine presents many dishes that also easily fit into the same realm as dips, even though they’re more often scooped with raw vegetables rather than rotis. Some, like the laabs, focus on ground meat or poultry, but Thai Diva’s nam prik noom features green roasted chiles flavored with garlic and shallots, to be scooped with crudite and fried pork skins. Need we tell you this dish is way hot? 45-53 46th Street, between Greenpoint and 47th avenues, Sunnyside

Area Malaysian cafes — and their cousin Singaporeans — have always kicked off their menus with a wonderful snack: roti canai, a crinkly, brown-spotted flatbread accompanied by a delightful curry that tastes of chiles, peanuts, and sweet spices and sometimes has chicken. It functions as a dipping sauce. At Flatiron’s Laut Singapura, the dip thrives in its sparest evocation, just the bread and a chicken-free version of the sauce that nonetheless couldn’t get any more flavorful. 31 East 20th Street, between Broadway and Park Avenue South, Flatiron