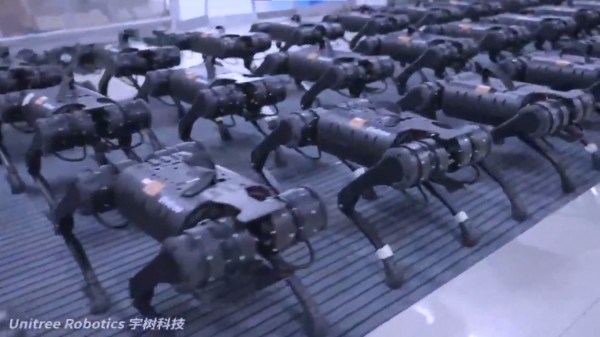 Chinese robotics firm Unitree recently shared a video on Twitter that made many people believe that a robot takeover might soon be happening. The Star Wars-themed video showed the Chinese robotics firm’s squadron of four-legged robots moving in unison. The robots are named Aliengo and were operated by artificial intelligence (AI) designed with “depth perception, high explosive sports performance, and an advanced protection level,” according to MailOnline.

The Force Awakens. Everyone, help count how many?

The robots, in unison, spring up to a squatting position, then leaned forward and returned to their original position. Although it seemed to have been a promotional video, it received many funny and terrifying responses on Twitter, with some likening it to a scene from the movies ‘The Terminator’ and ‘Black Mirror.’

Aliengo is now being compared to Boston Dynamics’ Spot robot, which also has four legs and is now being deployed in police operations in various cities, such as New York City.

Both robots can walk on their four legs, but Aliengo can walk up to ten feet per second or seven miles per hour. Also, previous videos showed that Aliengo could perform all kinds of jumps and flips, much like Spot, which is made possible by their flexible joints and strong motor. Its foot has sensors that will tell the motor to make movements more efficient.

But with Aliengo’s smart camera and ability to carry up to 11 pounds of payload, this four-legged robot can also become a delivery robot. Its camera can record real-time video transmission to provide more potential private and public uses, Business Insider reported.

Will Robots Take Over the World?

For many people, it has proven to be terrifying to look at dozens of four-legged robots moving in unison as if they are in the military being commanded. Some have likened it to the robots from the movies ‘The Terminator’ and ‘Black Mirror’ and it is believed that humanity gets one step closer to a potential doomsday scenario involving rogue robots, with each advancement in the A.I/robotic technology.

As for now, Aliengo does not pose any harm to humans but instead could help in various tasks. But people believe that China is not that far behind the US in terms of AI technology.

The post China launches army of robots sparking renewed fears of the rise of machines appeared first on TechJuice.