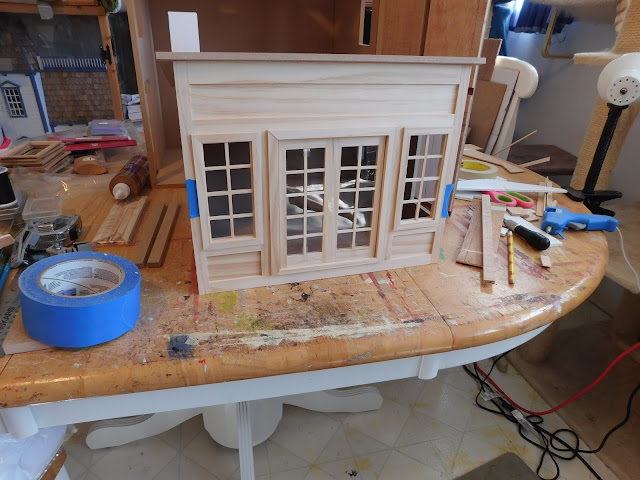 Thus Begins the Year of Scrounging

This year I want to try and limit my spending.  I've decided that if I can't buy it with my weekly 'allowance' or with my gift certificates I'm going to try and either do without it or make it myself.  It's mostly an exercise in budgeting and trying to track what I'm spending more closely.  And also to see how well I can make things instead of buying them.

Plus, this would get me to use things from my stash instead of buying new.  My stash is getting more than a little out of control.

I got the new kit in the mail this week.  That was exciting.  So I did a dry fit.

I like it.  I want to make it about three times taller, maybe an inch wider and an inch and a half deeper.  But I want the footprint to be relatively small.  The size is going to depend on a couple of things.  But the windows will all be on the front rather than two on the sides.

I want to do a mansard roof, so it doesn't get too tall.  That will give the living quarters some interest and realism I think.  I'm thinking a spiral staircase on the ground floor up to the second and then a straight staircase in the back up to the third floor.  And since I wanted to do a spiral stair case up to the loft in the Downtown Loft I that will be good practice for the shop.

I have been working on the Downtown Loft.  I cut a larger window in the upper front wall of the addition and built up the wall thicknesses to match the original kit.  I also closed in the backdoor since I decided I didn't want it after all. 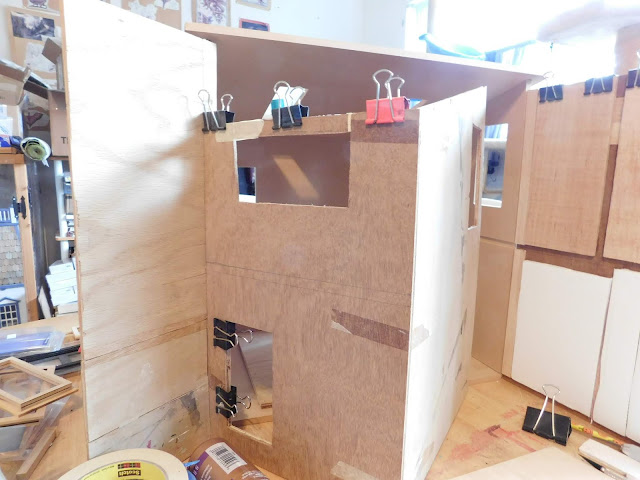 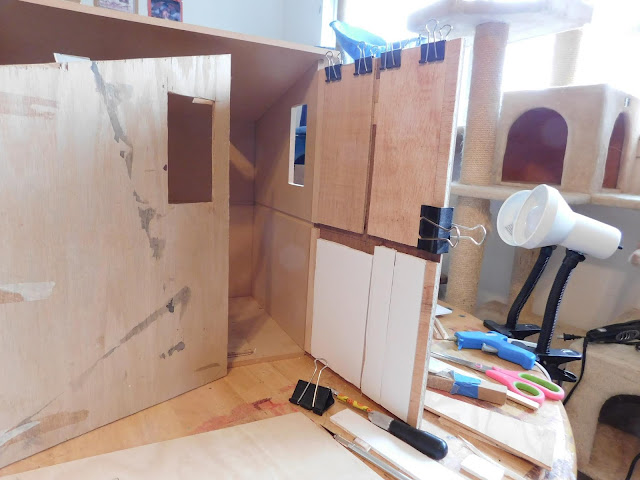 And I started work on the spiral staircase. 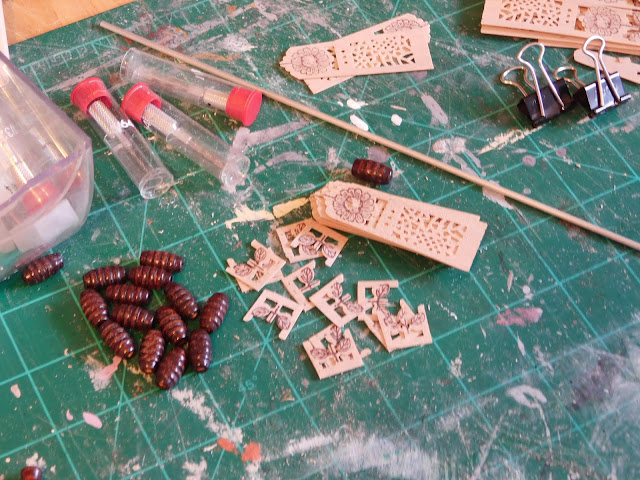 Cutting out my steps and some side braces was the first step. 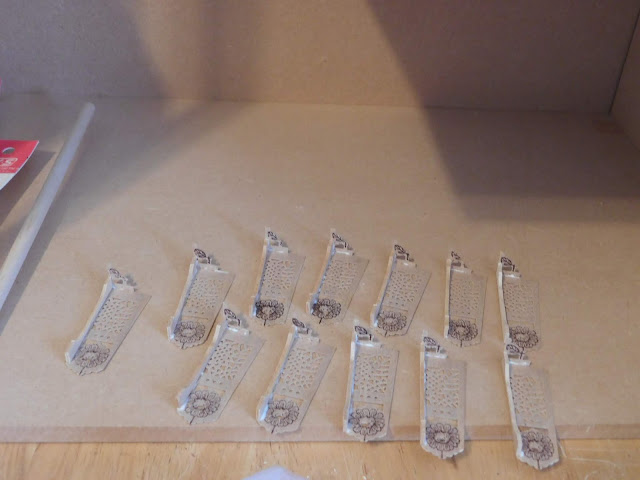 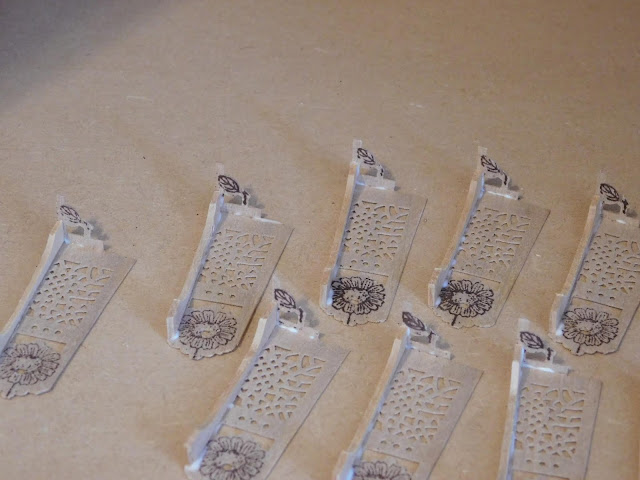 I plan to paint the entire thing black metallic so it looks like wrought iron.  That way the flowers won't really show up.  I ended up needing thirteen steps so I cut one more after I got all these glued.

Then I did a dry fit to see how everything would look together. 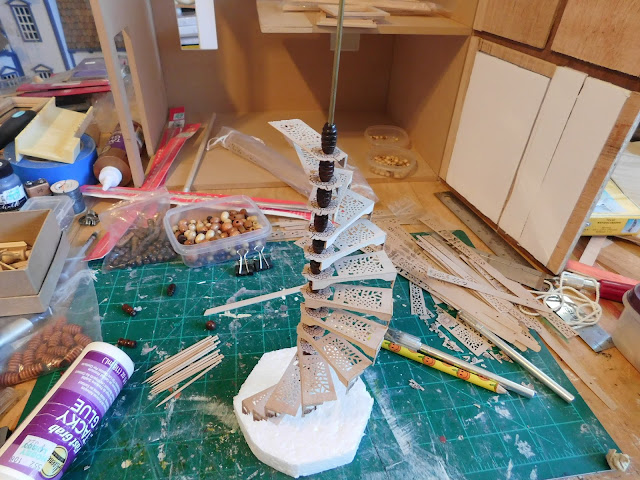 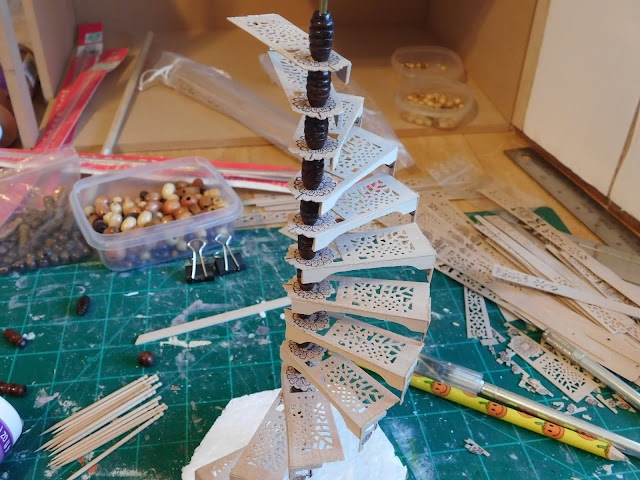 I don't like how the front pieces don't meet the steps under them.  Rather than pry them off or add 'legs' to the sides I'm going to use some of my lace and glue it over them.  That will join the steps up but keep it a bit airy looking.

My next issue is figuring out the spindles.  Rather than something really thick like typical spindles I'm planning on toothpicks with beads.  I worked up three different designs and I'm having trouble deciding between them. 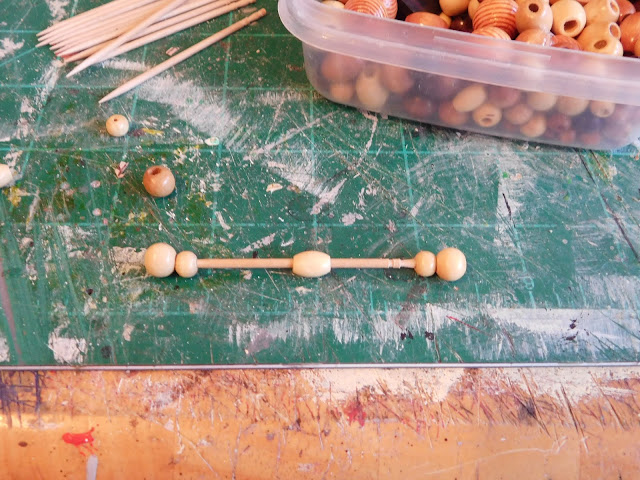 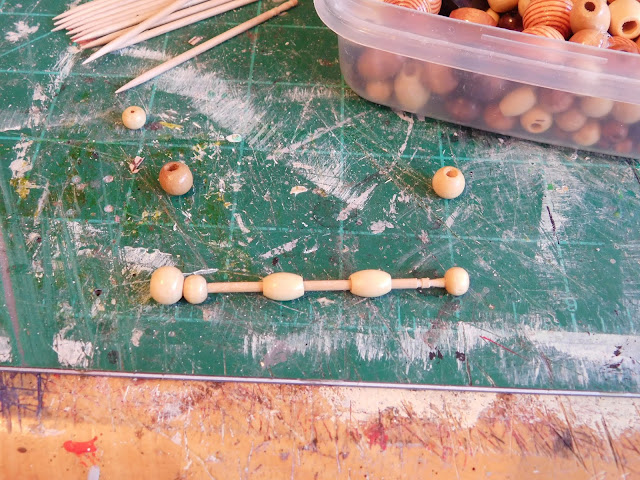 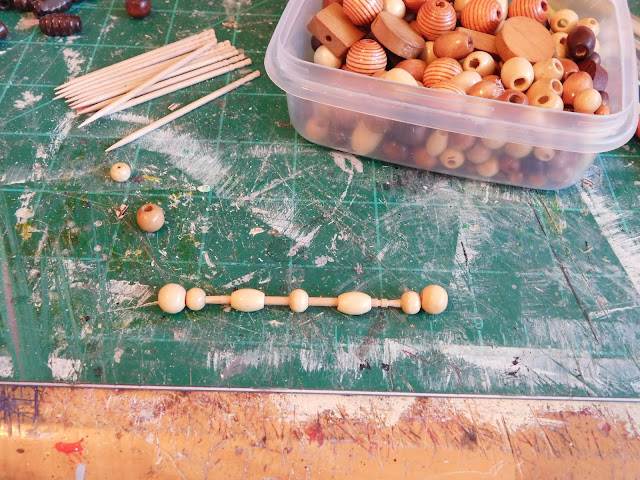 I like three, but I was also thinking of doing alternating spindles of one and two.  Or maybe a reverse of three, with two round beads in the middle and one oval to alternate with three as it is.

The big issue with how I'm making this staircase is that it might end up being a bit too elaborate for the Downtown Loft. The house is supposed to be more modern and simple.  So I'm still debating.

But I'm in no rush and playing around with design is part of the fun.

I'm also seriously debating selling a couple of my houses.  The Beach Bungalow and the Gothic Victorian maybe.  Possibly the Craftsman Tiny House though that one is smaller and doesn't take up so much room that I'd need to get rid of it.  I'd have to do it for pickup only since shipping for either of them would be astronomical.  My husband tells me that I don't need to but at the same time, I haven't worked on either of them in years (literally) so I'm still keeping it in the back of my mind.

How are all of you doing?
Source: shenandoahandstuff

Thus Begins the Year of Scrounging