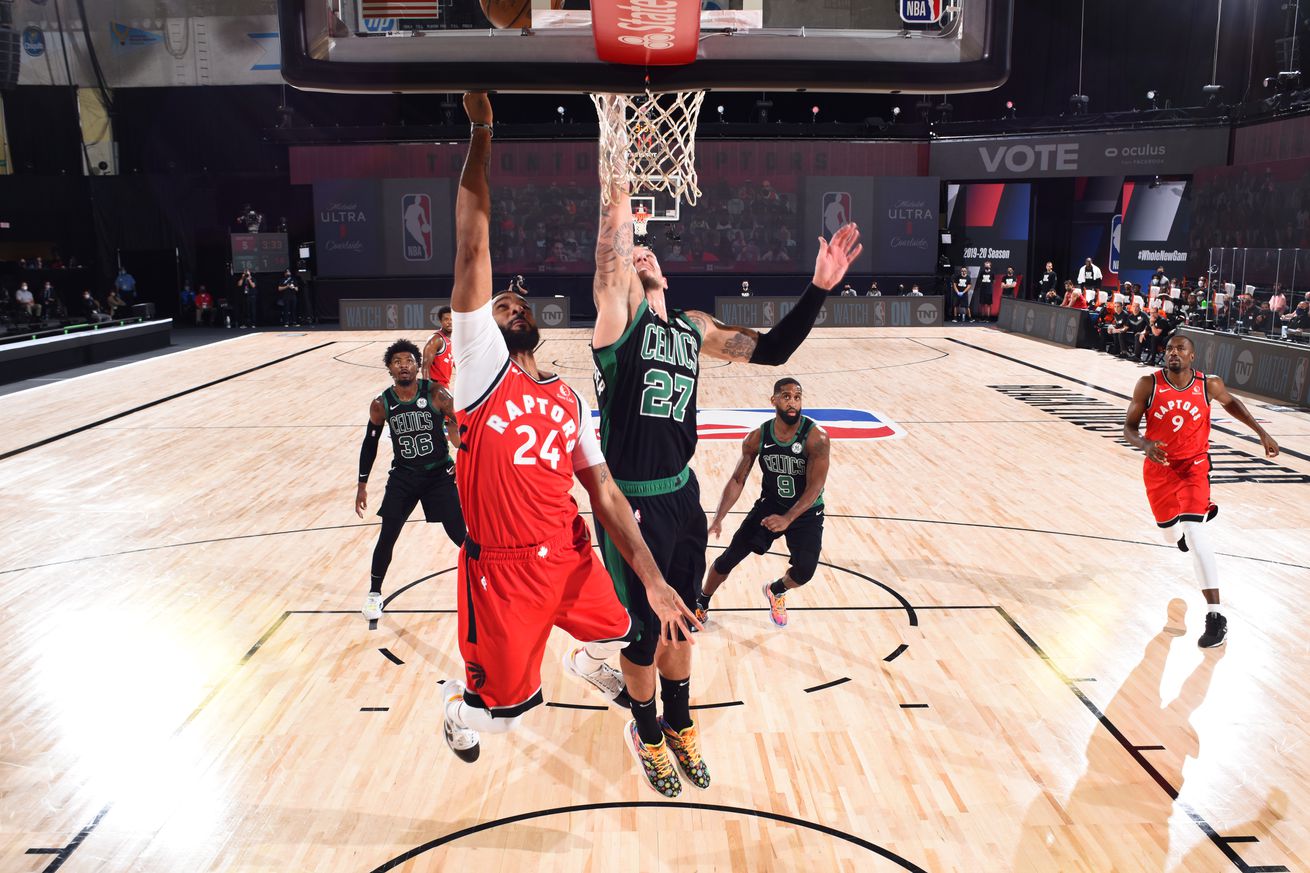 Norman Powell has had a challenging series against the Celtics, struggling to find his place offensively. He got a chance to rediscover himself in Game 5 though, and maybe that will help in tonight’s Game 6.

Well, here we are. The odds-defying Toronto Raptors find themselves facing their first elimination game since May 12, 2019.

It’s truly hard to grasp exactly what’s needed to get over a hump until you’re face to face with the ultimate consequences. For the Raptors, their offense looked uninspired in a Game 5 loss to the Boston Celtics. They shot an abysmal 38.8 percent from the field, their second lowest this series, and a below-average 30 percent from three. For a team that shrugged off fatigue as a concern for their starters, this game really woke them up after struggling on both ends and finding themselves down by as much as 30 points.

When it came down to Toronto’s starters, this fatigue was definitely apparent. The leader of Games 3 and 4, Kyle Lowry, struggled with only 10 points in 34 minutes, which included shooting 2-of-7 from the field and 0-of-3 from three in the first half. Despite picking things up in the second half, his backcourt partner Fred VanVleet also showed trouble in the first half with only one made bucket.

With fatigue an issue, the Raptors have to face the fact that they must be able to rely on their bench. Serge Ibaka has been there for the Raptors this series — though he may miss today’s Game 6 — but there haven’t been many other bright spots. Which brings us to Toronto’s other key bench player who has been almost entirely absent against the Celtics: Norman Powell.

Powell’s playoffs this year has been a rollercoaster of emotions. In the Raptors’ first round series against the Brooklyn Nets, it really looked like we were all witnessing the true “Playoff P’ in Powell. For that series, Powell shot at a consistent rate over 50 percent from both two and three-point land. Brooklyn’s defense was not great, but Norm seemed to know exactly when and how to take advantage. His performance has dipped dramatically in this series with Boston, however. Powell has shot below 40 percent — except for the outlier Game 3 where he shot 3-of-4 — and looked totally lost at times on defense.

Powell’s play has fed into Nick Nurse’s hesitation to expand Toronto’s rotation to more than seven players, relying heavily on big minutes from the starters. But if Game 6 didn’t prove that fatigue is a thing, I don’t know what does.

Fortunately, Powell got some minutes in Game 5 and had a chance to re-discover himself. I wouldn’t say it was anything too special by typical standards, because the whole team played tragically and Norm’s acceleration only showed in a meaningless fourth quarter. But the fact that he was Toronto’s second highest scorer and put up his highest numbers of the entire series could still count as something promising. This former self of Powell is exactly what the Raptors will need to win in Game 6.

Powell’s offensive game on Monday started off on the wrong foot, after a missed goaltending call on Daniel Theis who blocked a Powell layup. I feel like this missed opportunity set the tone for the first quarter, as the Raptors, and ultimately Powell, could have used the momentum after going scoreless for nearly four minutes.

The first half ended with Powell having made just one three-pointer on six field goal attempts, four of them being from three. For a Raptors team that was already struggling, it looked like they wouldn’t be getting much help from a man they’ve been able to rely on all season.

After underperforming all series so far, Powell’s issues have looked to once again be in his own head. Below, we can see that mental block at work. Powell was given a wide open look, hesitated to shoot it, but then took a shot on a contested look, solely because he knew he should have taken the initial look. These are the kind of things that were unheard of in the first round against Brooklyn.

Fortunately, things started to turn around in the second half — for Norm, if not for the Raptors as a whole. With coach Nurse finally deciding to rest some of the starters, Powell’s chance to improve was set. He played just over 15 minutes in the first half, but ended up leading the team in minutes by game’s end.

In the fourth quarter — under, yes, different defensive pressure — Powell improved his shooting, going 3-of-4 from the field and leading the way with eight points in the quarter. If nothing else, he was taking a lot more looks and seemed much more confident than earlier.

He was also much more effective driving to the basket, going 2-of-2 from within five feet rather than 0-2, as in the first half. He may have had a slow start, but attacking the rim has generally yielded more success for Powell, especially in this series. He got better shots off this way, they just weren’t falling in the early stages of the game.

Of course, Powell’s strongest play in the fourth quarter came too late to lead a comeback. While the quarter itself was worthless, I think it served a much bigger purpose than just resting the starters. That kind of shooting and play was reminiscent of “Playoff P” Powell, the player who could get you buckets when needed. This was the confidence that needed to be built back up.

Powell’s poor shooting in the first half did not provide much hope for Toronto. But his second half shooting is exactly what the Raptors need — to improve their scoring punch, and stretch their bench more than they have in this series. Powell was one of the brighter spots on the team on a disastrous night and had many opportunities to get buckets to fall. Now it’s all about bringing that play to Game 6, and hopefully to Game 7 as well.

Once again, Nurse may have to start digging deeper into the bench instead of relying on the starters too much, especially in such a crucial elimination game. Powell has given him the look of confidence to be trusted with some more minutes, now it’s up to him to work with it.

If anything, we know that Powell’s looks when driving to the basket have been far more successful. So why did he only take four shots in close as opposed to 11 from over 20 feet away? Although it may only be a small sample size, he may want to rethink where his shots should be coming from — especially under pressure from Boston’s effective defense.

Getting closer to his near 50 percent field goal percentage that Norm averaged this season, and even better in the first round, is the ultimate goal here. In the end, Powell needs to come out strong, running with that same confidence he showed in the fourth quarter of Game 5. Nurse has made it clear that he’d like to go deeper on the bench, relying on Serge Ibaka, Powell, and by using Matt Thomas, but his players need to hit the ground running.

In that spirit, we need to see a big Norm game here, because it’s well overdue. If he can capitalize on good looks and take smarter shots, I firmly believe the Raptors will have a strong chance to push this series to seven games.

All stats per NBA.com.