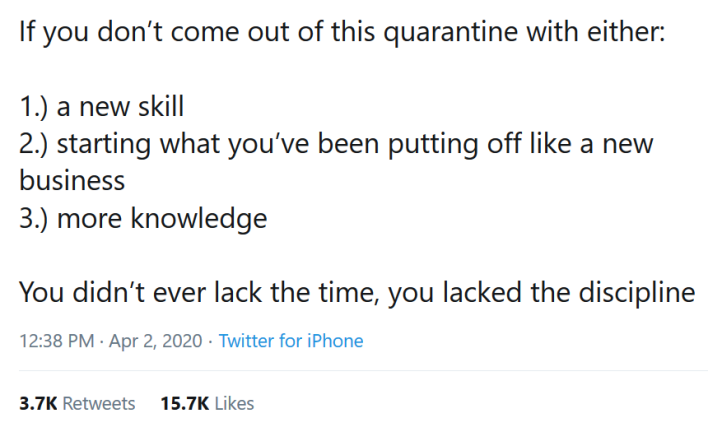 Writing in the Time of Pandemic

I saw my neighbor and fellow writer Beth in the park (at a safe distance). She told me her family was okay, her husband was working from home and she was maintaining her writing habits.

I congratulated Beth and thought, “Well, there’s at least one writer who’s able to focus on writing.”

Maybe the post I planned about writing and resistance in the time of pandemic wasn’t as necessary as I assumed.

I Had a Tiny Bit of a Reaction

My first thought was that this is exactly the kind of blaming and shaming that causes writer’s block. Writers need protection from this kind of thinking. I wanted to tell this guy how stupid his tweet was, that his idea of discipline does not and never will motivate people, it only shuts us down.

The tweeter got over 15K Likes, but plenty of comments on the thread called him out on his privileged status of not having kids to home-school, sick loved ones to care for, the need to apply for unemployment (a process that is now a frustrating full-time activity) or a job declared essential that required he put his life on the line for. Or apparently enough empathy to be distracted by hundreds of thousands of people sick and thousands dying. 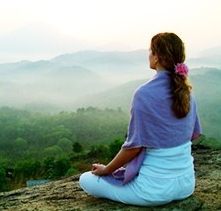 I realized I was not just informed by the tweet, I was emotionally affected. I wasn’t responding, I was reacting. Being triggered like this is a sign that there’s something deeper for me to look at.

If I was just informed, I would have calmly thought something along the lines of “This guy just doesn’t get it” and moved on.

Why was I so affected?

I was affected because I assumed this guy was basically saying, “As a self-appointed expert on the lives of people I don’t really know, I pronounce what everyone must do during the quarantine. I further dictate that anyone who fails to follow my directives has always had all the time and other resources needed to succeed and their failure is due solely to lack of self-discipline.”

Here’s the thing: I do this. I’m a self-appointed expert who offers advice in my book and this blog. I try not to pronounce what my fellow writers need to do. I try to keep an open mind and remember different approaches work for different people. But I can get dogmatic at times.

Being pedantic* is my shadow-self, that is, the version of myself I’m ashamed of and really rather not reveal.  (*Using the word ‘pedantic’ here is a demonstration of the meaning of pedantic and I hope you’ll see the humor in that.)

My outrage was an example of a shadow projection, that is, objecting to, complaining about or vilifying in others what you don’t want to accept about yourself.

Here’s another thing: Plenty of other people objected to the tweet. Why didn’t we all simply dismiss the criticism?

Why did so many of us react with outrage? Why didn’t we just ignore this ignoramus? For that matter, why do I still get satisfaction from calling him stupid?

Because it’s not a new idea; it’s a reminder of a belief — a deeply flawed, but even more deeply internalized — shadowy belief that we should do more, faster, better and should be endless producing tangible results to prove our worth.

If we didn’t think we should write more, shoule write better, should get published faster and sell more, we wouldn’t care what some tweeter wrote. And we wouldn’t have this background anxiety — or outright fear — that we’re messing up, missing opportunities, failing as writers.

Few of us are at our best right now, what with the worldwide pandemic and all. So who knows, maybe the tweeter regretted the tweet in question. (Though this seems highly unlikely based on his Twitterfeed, I guess it is possible).

Here’s what we need to remember if we want to set realistic intentions about writing in the time of pandemic:

Each of us must recognize for ourselves what we really need.

Trust me, beyond a small bit of discipline for a short while, it’s not about discipline. (See more at Video: How to Make Sitting Down to Write as Easy as Brushing Your Teeth)

I’ll be back in a day or two to highlight what’s happening in your brain that makes focus, motivation and creativity so difficult now and how being gentle with yourself is your best response.

Writing in the Time of Pandemic