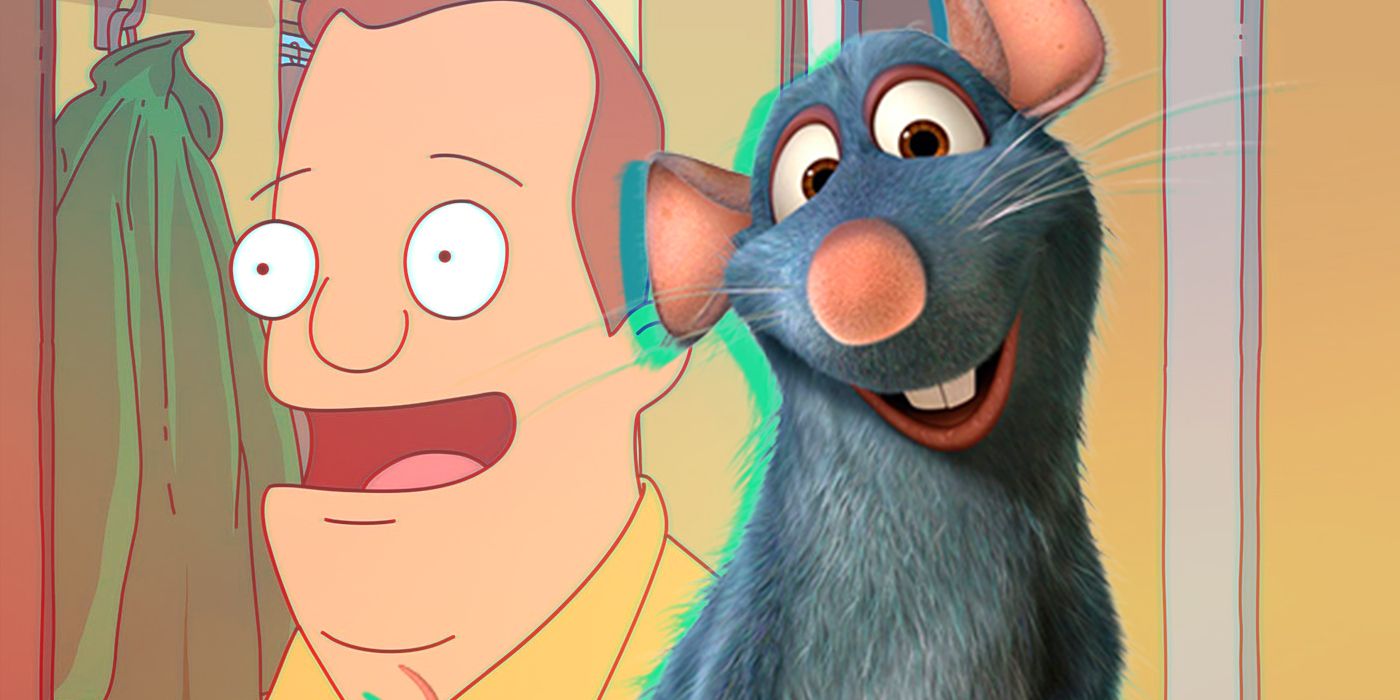 Bob's Burgers has had a number of guest stars lend their voices to the show, from John Oliver as an animal acting agent to Zach Galifianakis as Mr. Fischoeder's eccentric, failure brother. Even Patton Oswalt, who voiced Remy from Ratatouille, came on for a single episode back in Season 2, Episode 7, "Moody Foodie," as the titular critic. Thoroughly enjoying tearing down cooks, Moody Foodie is more like Ratatouille's cynical critic, Ego, than he is Remy.

Moody Foodie is an infamous critic, who's tarnished the reputations of several restaurants owned by Bob's friends. Reggie, a deli owner, has figured out he has a system, predicting that Bob's Burgers is next. While his friends warn him that Moody Foodie uses disguises and can ruin his business, Bob doesn't take this seriously at the moment; however, after spotting a man in a Hasidic Jewish disguise, Bob and his family freak out, tanking the customer service and food.

The review is brutal, calling Bob's food, "overdone and dry." Even Mort remarks that this review is a hit job, and Teddy, Bob's most loyal customer, can't enjoy his usual burger without thinking about the review. Moody Foodie does have one line of praise, claiming that, "the best part of the meal was the napkin I spit my food into."

Not only does this review initially turn customers away, but Mr. Fischoeder prematurally starts showing the restaurant to new renters, and Bob even has nightmares about starting a cubicle job after searching the classifieds. Thankfully, Bob doesn't give up, and he goes to Moody Foodie's house for a redo.

This initially seems like a good idea, but Moody Foodie is not having it, claiming he'd rather have someone drop off a flaming bag of poop at his doorstep than eat another burger from Bob. The chef insists that he get a second chance, wanting to prove to the critic that he is a good cook, but Moody Foodie refuses to give Bob a chance.

This is the antithesis of Ratatouille's message. The movie is all about not underestimating someone because of preconceived notions and giving them a chance to prove themselves. Chef Gusteau's whole premise was that anyone can cook, and Remy not only proves that to himself, Ego and Colette, but he also realizes that he is guilty of judging others, like Linguini, before giving them a shot.

In fact, Moody Foodie is a lot like Ego, a.k.a the Grim Eater, with both having respected but frightening reputations. Where Gusteau believed anyone could cook, Ego believed this to be impossible, like Moody Foodie. Furthermore, both take pleasure in giving bad reviews, even it leads to the downfall of a restaurant and its chef. For Ego, his review about Gusteau's lowered its star rating, and the chef died shortly afterwards, presumably from a broken heart. Meanwhile, Bob could potentially lose his business and home if things don't turn around.

Similarly, both realize the error of their ways at their own pace. When Ego goes in to review Gustea's under its new chef, he expects to give it a bad review. In fact, he was offended that Gustea's made a comeback, and he was eager to remind diners that this place was far from good. However, after giving the food a shot, he's taken back to the memory of when he fell in love with food. Even after learning that the chef was a rat, he writes a glowing review and finally agrees with Gusteau, claiming, "a great artist can come from anywhere."

Moody Foodie, on the other hand, is unwilling to give into the notion that anyone can cook till the very end, especially since Bob holds him hostage for not trying his food. However, Bob learns his own lesson, which is that he shouldn't let one bad review consume him. He makes lemons out of lemonade, giving discounts to those who bring in the bad review, keeping business afloat.

Moody Foodie also learns from this experience when he is about to call the cops on Bob. While waiting for someone to pick up, he eats the burger Bob made, and it's so good that he forgets about the responder on the end of the line. While he doesn't publicly admit that he was wrong, nor does he announce that Bob's food is worth a shot, he realizes sometimes chefs just have a rough day. Oswalt's roles in Ratatouille and Bob's Burgers are polarizing, with one being a cynical critic and the other being a hopeful chef; however in the end, they come to the same realization that anyone can cook.