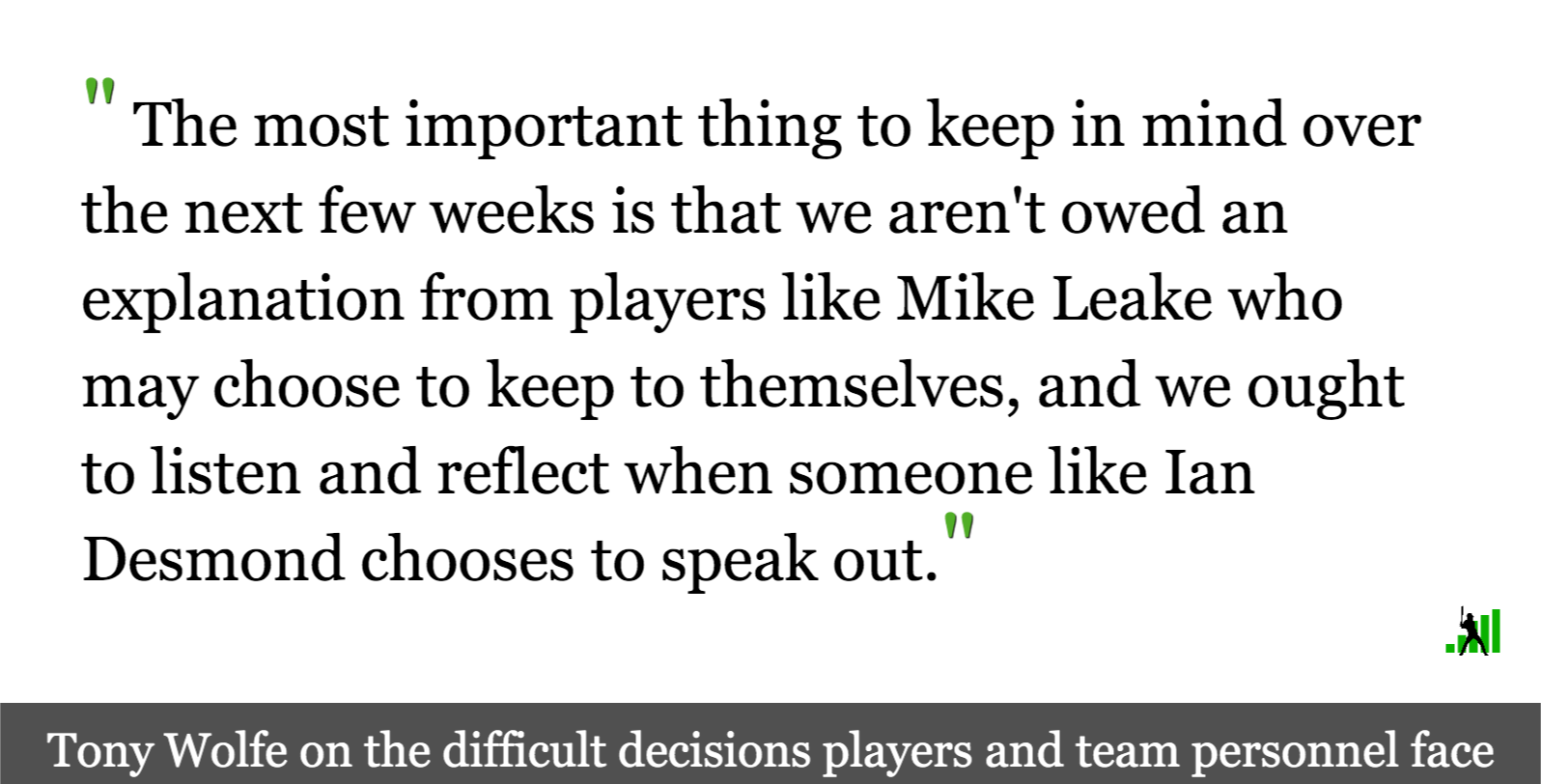 As Major League Baseball and the Players Association engaged in tense negotiations to resume play after the season was initially suspended due to the COVID-19 pandemic, much of the focus was understandably spent on the money players would be paid for competing in games during the crisis. But in addition to the compensation for players on the field, a number of other issues needed to be sorted out, including protections for players who did not wish to play this season out of concern for their own health and safety, or for that of someone close to them. Both sides knew that regardless of the salary agreement and health guidelines passed, there would be players with pre-existing health conditions, ones who live with or care for high-risk individuals, and ones in otherwise uncertain situations who would prefer to sit the 2020 season out and wait for next year.

On Monday, the first wave of such decisions arrived, with four veteran players announcing they wouldn’t play the 2020 season. First was Arizona Diamondbacks right-hander Mike Leake, whose agent released the following statement:

Mike Leake is set to be a free agent after the 2020 season. Here is an explanation of his opting out from his agent, Danny Horwits. pic.twitter.com/dtlZm4OC5E

A little while later, The Athletic’s Britt Ghiroli reported that two members of the defending champion Washington Nationals, Ryan Zimmerman and Joe Ross, had also opted out of the season. Zimmerman released a statement, as did Nationals general manager Mike Rizzo.

Finally, later Monday evening, Colorado Rockies outfielder Ian Desmond announced his own decision to opt out in a long, stirring statement on Instagram.

Under the current agreement, a high-risk player who decides to sit the season out is eligible to receive his full prorated salary and service time for 2020, while those not considered high-risk will not be paid and forfeit that service time. Players who aren’t high-risk and opt out are also not permitted to change their minds and come back later in the season, whereas high-risk players can, though per Jayson Stark, MLB and the MLBPA are negotiating a possible change to that rule that could allow non-high-risk players to return. Neither Zimmerman nor Ross is reportedly considered high-risk; it’s not known whether Leake and Desmond are.

The circumstances surrounding each player’s decision are different. Leake was looking at a full-season salary of $16 million in the final year of a contract he signed with the St. Louis Cardinals ahead of the 2016 season. He’ll turn 33 in November as he enters free agency for a second time (he and the Diamondbacks have a mutual option for the 2021 season), coming off a 2019 season in which he held a 4.29 ERA and 5.19 FIP in 197 innings.

The Diamondbacks, who traded for Leake last July on the same day they shipped Zack Greinke to Houston, shouldn’t see a huge change in their rotation outlook after the Leake news. The right-hander was competing with Merrill Kelly for the fifth spot in the rotation, and considering the salary he was owed, would have had a good chance to secure that spot. The D-backs will still go with free agent prize Madison Bumgarner, as well as Robbie Ray, Luke Weaver and Zac Gallen in front of Kelly, with young right-hander Jon Duplantier and lefty Alex Young in line for a few chances as well.

Ross’ situation with his team is similar. With Max Scherzer, Stephen Strasburg, Patrick Corbin, and Aníbal Sánchez entrenched in the first four rotation spots in Washington, Ross was likely to slot in as the fifth starter. He split time between the rotation and the bullpen last season and owned a 5.48 ERA and 4.59 FIP in 64 innings, marking his third straight season throwing fewer than 100 frames. Austin Voth and Erick Fedde should each get opportunities to fill in his spot.

Where Ross and Leake differ is in how this decision will affect them in the near-future. Leake’s track record as a dependably average starter wasn’t likely to be changed that much by the 10-12 starts he might have made in a healthy shortened season this year, and the contract he signs this winter will depend much more on what the state of free agency is overall than it does with what teams saw from him in 2020. In Ross’ case, however, he’s likely postponed his free agency by a year, if he is indeed not viewed as high-risk and is forced to surrender a year of service time. He had a $1.5 million arbitration salary this year and would have qualified for arbitration again next season before hitting free agency ahead of 2022 — now, he’ll likely test the market for the first time at 29 years old instead of 28.

Zimmerman could lose even more because of his decision. A 35-year-old first baseman coming off a disappointing year of part-time play in 2019, the franchise icon landed a one-year, $2 million deal from Washington this winter after the team declined his $16-million option. Now he’ll hit the market again in what’s sure to be a difficult offseason for free agents who don’t fit into the top couple tiers of the class. The Nationals could decide to offer him a similarly cheap deal to return in 2021, but if they move on, there’s no guarantee Zimmerman would get much of a look from other teams. The language of his statement was definitive in saying he wasn’t retiring at this moment, but also didn’t offer a commitment to playing beyond 2020. Considering he’s previously said he’d retire if the Nationals didn’t offer him a spot, it’s possible he’ll place his baseball future in Washington’s hands again this winter.

Desmond, if not considered a high-risk individual, will forfeit the the fourth year of a five year, $70 million contract he signed with Colorado before the 2017 season. The 34-year-old veteran stood to make a full season salary of $14 million. His contract with the Rockies hasn’t worked out the way either side would have liked, with Desmond coming in below replacement level in each of the last three seasons, thanks in part to poor defensive numbers following a move to the outfield. He’d shown progress last season, however, and would have been a good DH candidate in Colorado this year coming off his best offensive performance since 2016.

These almost certainly won’t be the only players to make this decision in the weeks leading up to the start of the regular season. While we ought not to speculate on the reasoning behind any given player’s decision not to play, Zimmerman and Desmond both specifically mentioned their young children, and their either pregnant or otherwise high-risk wives in their statements. There are many others around the game who are expectant fathers, have young children or simply live with a high-risk partner who are likely still engaged in difficult conversations, not to mention those previously reported to be high-risk themselves.

Desmond’s thoughtful explanation of his decision is particularly illuminating, as it shows just how many factors athletes are weighing when considering playing this season. The ramifications of frequent travel and interaction with people outside of one’s own household during a pandemic that has killed 126,000 people in the United States alone are daunting enough to make any reasonable person question whether it’s worth it to participate in the season. More directly, Desmond’s post forces us to question whether Major League Baseball has earned that kind sacrifice from its players. As Desmond points out, he’s a Black player in a game that is severely lacking in Black senior leadership and is completely devoid of Black people among the ranks of its principal owners, a game that stifles the expression of Black players, and a game that still fails to reach Black children, particularly poor Black children. Desmond had the choice between potentially putting himself in harm’s way for that game, or staying home to help his wife and children through a time when the coronavirus and police brutality — two public health crises that disproportionately affect Black people — are at the forefront of much of the public’s minds. It isn’t difficult to see why he made the decision he did.

It isn’t just players who must make difficult calculations when it comes to this season. It was also reported Monday that the Minnesota Twins had decided to not allow two of its coaches — Bob McClure, 68, and Bill Evers, 66 — to work games in person this year, out of concern for the safety of their two oldest coaches. Both will still be paid their expected salaries for the season, and could serve in an advisory capacity to the team. The Twins will also not have their radio team of Cory Provus and Don Gladden travel to road games in an effort to keep the size of traveling parties to a minimum. Provus and Gladden will still conduct road broadcasts remotely.

Like those of the players, decisions such as these by the Twins could set a precedent for how other teams behave in the coming weeks. Neither McClure nor Evers are believed to be at anything short of full health — though Evers did undergo surgery for colon cancer 14 years ago — but the team believed their age put them at an elevated risk. Those two are hardly the only coaches their age who were expected to fill some kind of in-person coaching role in 2020, and considering how much of the MLB’s current health protocols rely on athletes and other members of the organization policing themselves responsibly, their presence in the dugout deserves a hard look.

As for the players themselves, negotiations are still ongoing between the union and MLB to award them the appropriate protections heading into this season. Those talks aren’t preventing teams’ training camps from proceeding, but they do cover some important subjects, including the rights of and rules regarding players who opt out of this season. The number of players those negotiations will affect is likely greater than you think, but it also isn’t the most important thing here, nor is it the specific reasons for which they choose to sit. The most important thing to keep in mind over the next few weeks is that we aren’t owed an explanation from players like Mike Leake who may choose to keep to themselves, and we ought to listen and reflect when someone like Ian Desmond chooses to speak out.