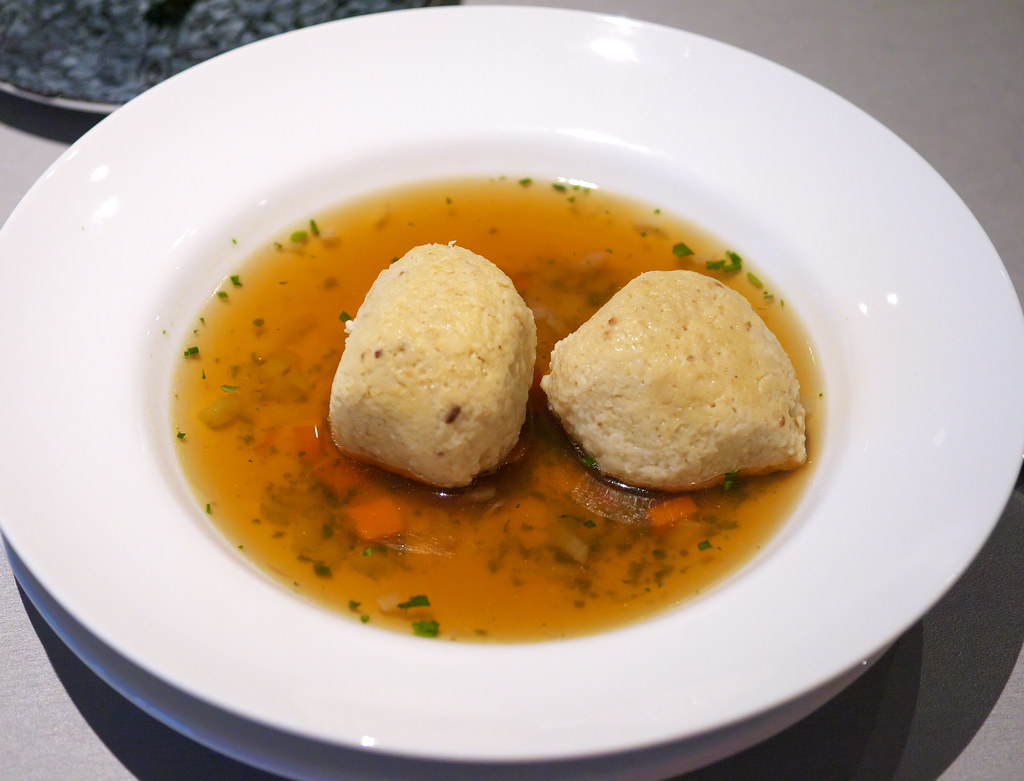 Regular readers of this blog know that I love to cook, especially for the Jewish Holidays. Love it and do it so well that I was fortunate enough to be featured in the Cleveland Plain Dealer doing it in 2011! But circumstances are not permitting this tradition to continue, at least in my current home.
Restaurateur Brad Friedlander to the rescue! After closing his iconic Moxie, the Restaurant in Beachwood Ohio earlier this year, he reinvented the space to Blu, the Restaurant and the emphasis of the cuisine to fish and seafood. Moxie had done Rosh Hashanah dinner for a number of years, and we sampled it once with friends. It was ok, but lacked profundity.
Blu offered a Rosh Hashanah dinner this year, with essentially the same menu as Moxie had before. Given the home kitchen situation, we decided to give it a try, and it proved to be a winner. Not as good as mine, you know, but a lovely meal to welcome in the New Year.
After making Gefilte Fish from scratch for most of my life, I find most others' versions range from lame to repulsive. Still, Blu specializes in fish. How could it be bad?
The answer is that it was light and fresh, and quite good. Not as good as mine (they probably didn't use any carp), but a delightful start to the holiday feast. I would have liked a higher ratio of horseradish to beets in the topping, but that's a quibble. 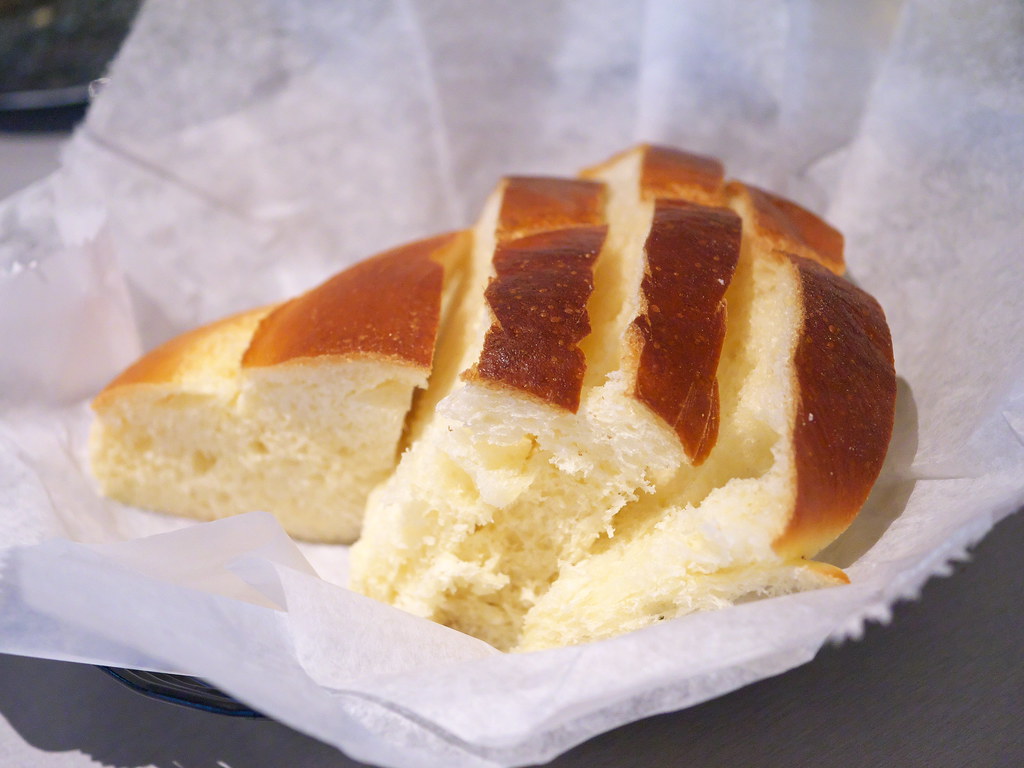 House made Challah followed the fish. We asked for honey and it was brought immediately. Lovely.
Next up, the big test. Chicken Soup with Matzoh Balls.

Though not quite as special as mine is, this soup offered chickeny flavor, with a nice balance of sweetness from the carrots. The matzoh balls were softly textured and tasted great. I would eat this again.
I always made brisket for the entree. My mother would occasionally roast a turkey in addition to the brisket, but I never did. This brisket was more pristine, without the tomatoes that are a staple in mine. Still, it was cooked to melt-in-your-mouth tenderness, and the jus complimented it nicely. The roast chicken was a standout - crispy skin, deftly seasoned, and perfectly cooked.
We really enjoyed the vegetables. Somehow, despite the nearly full restaurant and the hustle and bustle of service, these plates were hot, but the contents were still al dente. So not only did they taste good and have great texture at dinner, the leftovers didn't turn to mush on reheating. Well done, Blu!
Accented with a generous hit of rosemary, the potatoes were likewise perfectly cooked.
My mom (and I) never did noodle kugel, or anything too sweet for the main courses. My Russo-Hungarian dad was all about the pepper and salt, so we always made potato kugel. Nonetheless, this was probably my favorite dish of the evening. Eggy and creamy, with a little sweet and a nice hit of cinnamon, I would welcome this dish on my own table.
This brings us to dessert. 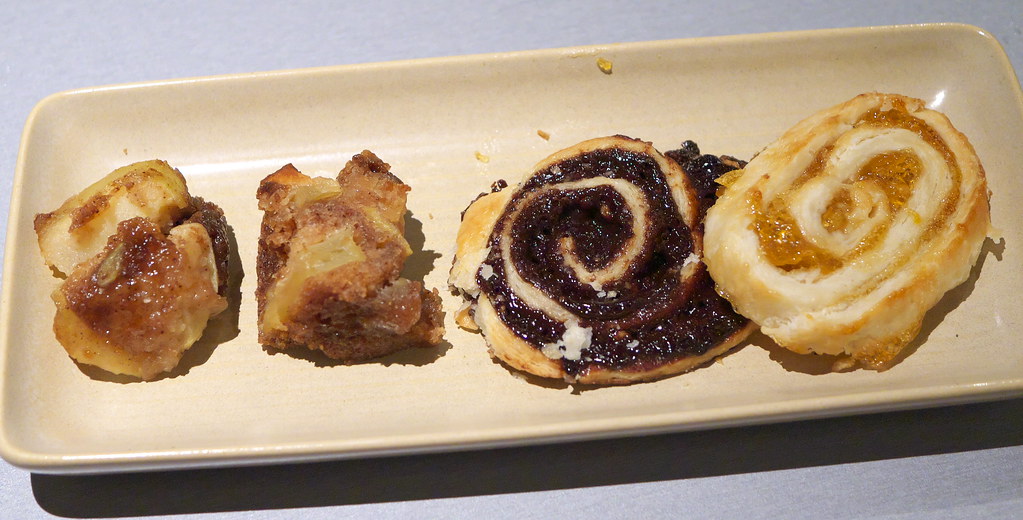 The menu said that this was Rugelach and Spiced Apple Cake. The Apple Cake is on the left. The honey went so well on it! The pastry on the right didn't resemble the Rugelach I grew up on. But the buttery rich flaky pastry, and infusion of what tasted like home-made preserves (prune and apricot, I think) made them a winner whatever they are called.
Service, which had been poor on our first visit to Blu, was mostly excellent. We were glad to see they've worked those glitches out! And the portions - we had enough leftovers (about half or a little more than half) for dinner for the second night of Rosh Hashanah at home, and leftovers remained even after that!
So if you wonder how this dinner stacks up against mine, here are some links to previous dinners I've done at my house or my mom's. 2009, 2008, 2011 (at Mom's). But we had a lot of fun playing with Rosh Hashanah dinner at Blu, and a big thank you to Brad for doing it.

Oh, and here's what a fish dish from a non-holiday night looks like at Blu.