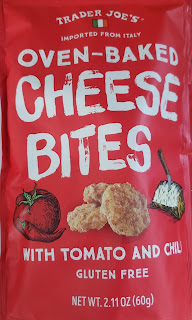 "You know what they called these back in the day?"

"Well, they still called them oven baked crunchy cheese or something like that. i thought it was meant to be like the the burnt corners of ooey gooey cheese that your Grandma would make...but anyways, it wasn't 'Trader Joooooooooooe's'...it was 'Trader Giotto's.' Had none of them fancy spices on them either."

It's true....kinda. Trader Joe's Oven-Baked Cheese Bites with Tomato and Chili are a newer take on the popular product formerly known and reviewed on this blog as Trader Giotto's Oven Baked Cheese Bites.

There's been talk elsewhere about the rebranding/name changes being done at TJ's. The official corporate stance is consolidating and unifying the "Trader Joe's" brand, as corporations like to do on a continual basis. That's likely not the only reason, and that's valid too. While on the record here on this blog as saying I personally liked the former names TJ's used to market products, I don't really mind the change either....I just hadn't noticed its implementation on store shelves until purchasing this snack. It's probably because I'm totally oblivious.

But odd cheese is a good way of putting it. There's...something amiss here flavorwise. The first couple I had, nestled atop the bag, were very tomatoey, and not in a great way. The bites started out like their predecessors - salty, crunchy, cheesy - not bad - but then switched flavor profile to "sweet juicy tomato" without any of the juice of course. It was a bit strong.

Further down into the bag, there seems to be where the spicy chili seasoning settled in. We're not exactly talking Dante's Inferno here, but the further down I went, the hotter it got. There was still the perhaps-a-bit-too-cloying tomato, but the medium heat chili spices helped tamper it down some....but it still wasn't that great. Something like a little more even seasoning distribution, with perhaps some garlic snuck in to help bridge the gap, coulda made a better snack in my opinion.

Whatever. My opinion isn't the only one out there. My lovely bride sure likes to eat them up and is more gungho than I, although i think we'd both agree the plain version tickles our particular fancies a little bit better. Something like a combined seven from us probably fits the bill.