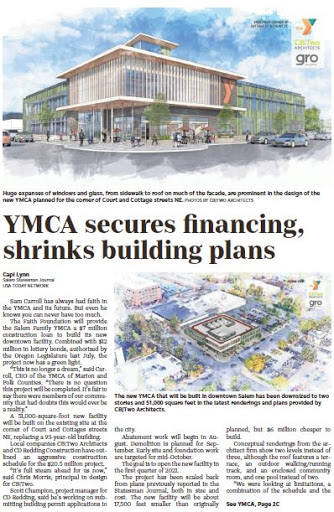 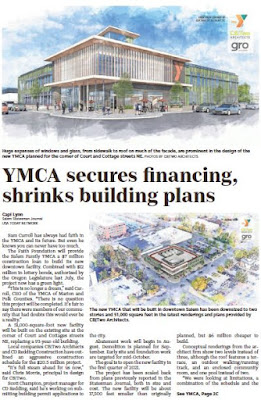 In the paper today is a story about reduced ambitions for the new YMCA downtown. They have some funding commitments apparently in hand, but the total amount means they have had to make the building and total plan a little smaller. Instead of a three-story building, it's now two stories. Where the IKE Box is, they were going to put in housing to replace the Court Apartments, but that's postponed further and perhaps even deleted now.


There's some stylistic changes to the east and south building facades, and I think I like the older versions better, but these details don't seem very important.

What does seem meaningful is the way we are lining Chemeketa Street with voids.

From the east:
Plus the parking garages, that are partial voids, even when they have ground floor retail
And there's a couple more smaller parking lots that wrap around existing corner buildings.

If we want Chemeketa Street as a pleasant boulevard for walking and biking downtown, instead we are making it a primary access street, a glorified driveway or alley even, for car storage. As empty lots accumulate, not even used for parking, together they sap even more life from the street. Chemeketa is growing less attractive for walking and biking between Riverfront and 12th Street. And until we have better land use immediately on it, no amount of fancy sidewalk and planting will compensate.

This is something that the Downtown Advisory Board and Council may need to think about more.

See notes on the Court Apartments and Mortuary building here, and all previous notes on the YMCA project and Y history here.
Source: breakfastonbikes