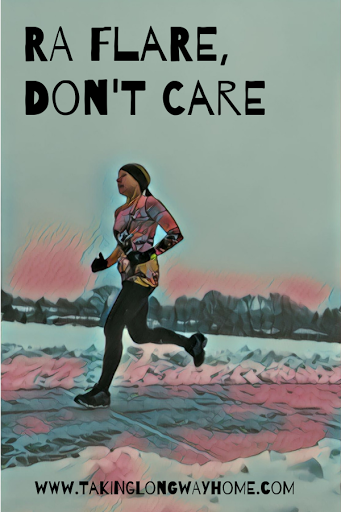 Disclaimer: I received a pair of Mizuno Wave Horizon 3s in exchange for my honest review.

As you might have guessed from the title of my post, I spent most of the week dealing with an uptick in RA symptoms. As much as I wanted to curl up under a blanket and stay on the couch, I tried to keep it positive and stuck to my usual routine. I was both grateful for being able to move and frustrated for not being able to move the way I like. It was a tough week for me. I can't help but believe that some of my symptoms are due to this pervasive dampness we're having. 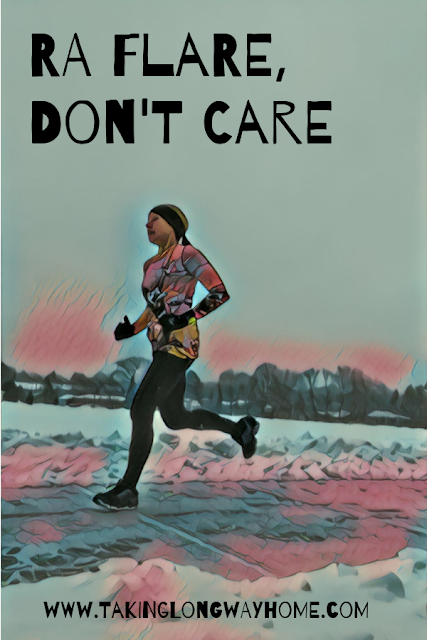 Running
On Monday, I woke up to snow and ice...again! I thought the groundhog didn't see it's shadow? I'm pretty sure the groundhog was drunk. I also woke up that morning to pain and achiness in every major joint in my body. I popped a few ibuprofens and I took my run to my new treadmill. I just ran out of gas by about 4 1/2 miles. After that run fail, I called my doctor to start a course of steroids. Time to shut RA down again. 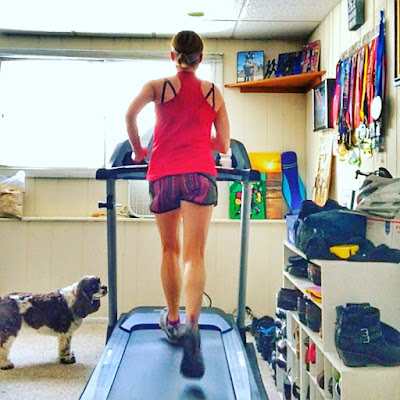 By Wednesday, I was feeling better and I decided to try my luck outside. I needed fresh air, even if it was the wet and windy type of air. I was pelted with freezing rain, the wind tried to push me back inside, and I struggled to stay upright at times. But I felt really good and I ran 6.2 miles, only stopping a few times to walk. I needed this run and my runner's heart was full.

The crappy weather continued and on Saturday I was stuck inside again. I'm using these TM runs to work on pacing, running slow and steady so that I can give up some of the run/walk intervals I've been doing. Still having fatigue and knee pain from this RA flare, I called it quits at 6 miles. It looks like that half I had hoped to do in Florida in a couple of weeks will be a no-go. 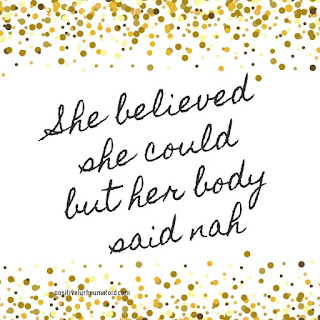 CrossFit
To start off my strength training this week, Sammy Jo set me up to do box back squats. I did a warm-up set with an empty barbell and felt some pain in both shoulders. She had me stretch before doing the weighted sets. After the second set, I set the barbell back in the rack and put my head down on the bar. There were tears, not of pain, but of frustration of not being able to complete the set due to the pain in my shoulder joints. We switched to a set of front squats, which didn't bother my shoulders at all and then went to work on some other activities, including pull-up prep.

Bootcamp was 2 seven minute AMRAPs that we repeated. The first AMRAP was a 12 calorie row, a lap of overhead dumbbell lunges, 12 dumbbell snatches, a lap of overhead dumbbell lunges, and 12 v-ups. I was able to complete 2 full sets of the activity before the 7 minutes were up. The second AMRAP was 12 wallballs, a lap of farmer carries, 12 dumbbell cleans, a lap of farmer carries, and 24 flutter kicks. I completed 2 full rounds of this activity plus another set of wallballs before the time was up.

On Friday, I went to afternoon bootcamp. We did a ladder workout starting with 50 double unders (I did 150 singles), 40 calorie row, 30 ab mat situps, 20 wall balls, and 100m of bear crawls pushing a slam ball; the sequence then went back up the ladder, ending with the double unders. I wasn't the last one to finish but it was close. I need to fuel differently for this class!


I Tried It! Mizuno Wave Horizon 3 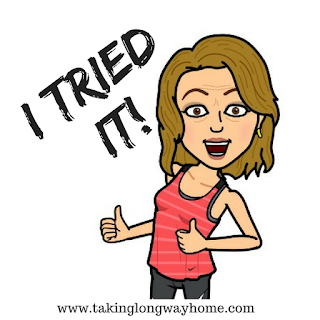 When Mizuno contacted me to see if I wanted to try the new Wave Horizon 3 prior to its March release, of course, I said yes! I have been running in the Wave Inspires for a couple of years now and have been really happy with them. The Horizon, a stability shoe, is billed as a "high mileage shoe". I received the shoe in my favorite color, black, with purple highlights. It was love at first sight. Truth be told, the initial appearance of the shoe reminded me of my old beloved Asics Gel Nimbus, and after running in the Horizons, I think that this would be the perfect replacement for Nimbus lovers who have been disappointed with the changes in those shoes. The Horizon is much heavier than the Wave Inspires (9.8 ounces vs 8.3) but not so much that I noticed it on the run. 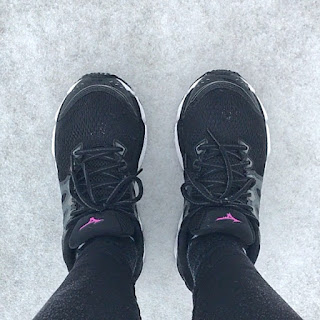 In fact, I had my best run of the week in the Wave Horizons. The shoes are very cushiony and the soles are stiff like the ones on my Inspires. Do you Mizuno runners notice that your shoes make more of a snap when you hit the pavement than with other brands? I did also try my Wave Horizons on the treadmill, but because they are heavier, I think these shoes will be better outside. I'm really excited to continue running in the Wave Horizons. The Mizuno Wave Horizon 3 will be available in March.

How was your week? Are you still dealing with crazy weather? Have you been inside or out? Anyone have increase in pain and achiness when the weather is damp?

~~~~~~~~Farewell to the Weekly Wrap~~~~~~~~
All good things must come to an end, and after much discussion and many regrets, Holly and I have decided to end the Weekly Wrap. Both of us have a lot going on in our lives off the road and that has made keeping up with the linkup very challenging. It has been a fun ride and I have enjoyed getting to know each linker through your blog posts. I still plan on blogging and hope that we can all still continue to follow each other's training!
As far as linkups go, there is a new linkup hosted by Run with Pugs, Mat.Miles.Medals, Funner Runner, Gracious Warrior Princess, Meghan on the Move, and Train with Bain. The linkup is called Running is our Therapy (#RIOTS) and it's billed as an accountability linkup. Sounds to me like it will fit nicely with what we've been doing over here. I plan on checking it out next week and I hope to see many of you over there! In addition, Kooky Runner and Zenaida host Tuesday Topics every week, where they post a prompt for everyone to write about.
Thank you again for supporting the Weekly Wrap. I hope I see you on the road sometime! Stay in touch.
XOXO ❤️