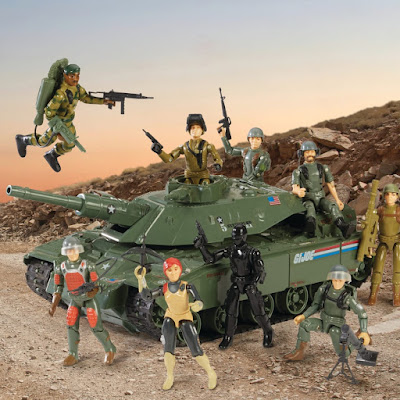 Secret Wars Toys As A Parable of Design, Detail and Giving People What They Want

This is a design-is-not-engineering parable: 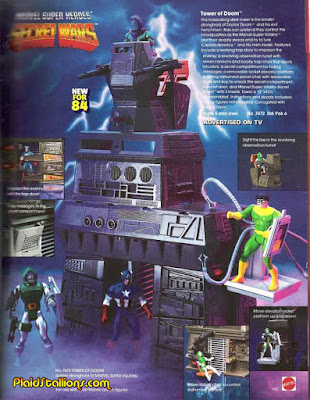 Mattel--fresh off the success of He-Man--decided to make some superhero toys with Marvel.

You know Marvel, right? The company that currently dominates the entire entertainment market with a gloved fist?

So they gathered ten-year old boys together in a focus group. They said to them "Listen, ten-year-old-boys, what is it that you desire?"

So they went to Marvel Comics and said "Listen, Marvel, you make the comics, we'll make the toys. Just make sure it has that stuff." Thus was born a comic book called Marvel Super-Heroes Secret Wars, (over in the UK, a little earlier, the comic anthology 2000AD polled its readers about the themes they liked and they voted for "future war" and thus the comic Rogue Trooper was born). Marvel head Jim Shooter wrote a 12-issue battle royale in another dimension featuring all of the company's most popular heroes: the Avengers, the X-Men, Spider-Man, the Hulk, etc. Mattel made toys in the now-mandatory Star-Wars-like scale. Sales reps went to comic shops and toy stores and hyped them all up and down.

...it didn't work. Well, the comic worked: the first issue sold 800,000 copies. Which is a lot. But the toys, they were not that popular. Again: they should've been. Marvel Comics at the literal height of their popularity with kids (they had recently turned down an offer to buy DC) plus toys, in the middle of The Original Toy Tie-In Decade. It didn't take. 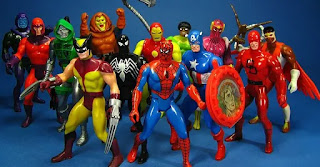 But it's important to remember what they sucked compared to--it was 1984--two of the most toyetic properties of the late 20th century had just arrived: 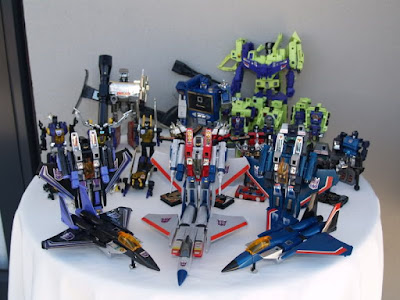 Marvel had vehicles! And weapons! And twenty years of good will! Plus a best-selling comic and yet the Marvel toy line wasn't a patch on these newcomers. Why?
Well Transformers and GI Joe had their own cartoons, but the toys were also cooler--and more detailed. And it's important to recognize what that detail meant. Marvel put very little effort into the design of the vehicles and weapons and stuff: 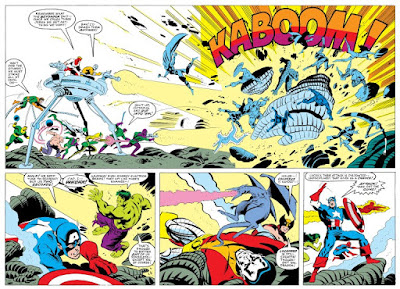 ...it's like a...War of the Worlds walker thing that two guys can sit in? With...rays? There is no love in that war walker. But maybe more important it doesn't mean anything. And here's what I mean by that:

Look at GI Joe and Transformers: Roadblock has a fully-automatic machine gun, because he's a big guy and the only one strong enough to carry it, Snake-Eyes has an uzi, because Snake-Eyes is the mysterious cool guy and uzis were cool back then, Soundwave turns into a tape-player and he has tiny other robots that come out of the tape-player, Megatron has a giant cannon on his arm because when he transforms hsi whole body into a gun it's the scope on the gun. And the robots turn into these mundane things because they're hiding on Earth in disguise. Every visual detail builds the world and also has a clue to the narrative (a narrative echoed in the cartoons, comics and the little data-files on the back of the toy box). That gun platform in Secret Wars? It just tells you they're in space. And would like to shoot you.

Of course Marvel had visual world-building: Captain America has that stars-and-stripes shield because he was created as a patriotic propaganda tool in WW2, the Hulk's pants are ripped because he transforms unwillingly from human into monster, etc. but the foundational mistake of Secret Wars--from a toy-selling perspective--was to have the story take place on another planet, light-years away from the world Marvel had already built. The characters were all Marvel, but the focus-grouped selling-point--those vehicles and weapons and bases--didn't have anything to do with the ongoing Marvel story that dozens of creators had already put decades of work into.

If the toys had come with the X-Mansion, Avengers Mansion, the Fantasticar, and Doom's Castle, the line might've done better, but I think the real nail in the coffin might've been the shields. 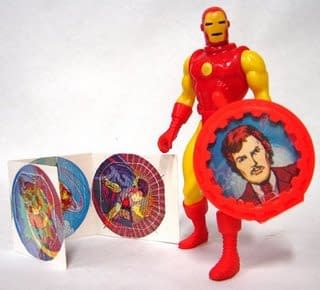 Every Marvel character came with a shield and this was a terrible idea. Somewhere a toy exec is going "But we're giving these kids more stuff? Who doesn't want more?". But, to a kid, nothing marks this toy line as some off-brand ignorable just-a-cut-above-Hulk-shampoo tat as these shields--they announce immediately that this toy line is detached from the story of Marvel. Why would the fucking Hulk have a shield? With his secret identity head on it? The shields don't even appear in the Secret Wars comic--but even if they did, they would just point to these toys being part of this inessential, skippable, temporary pocket-universe. The shields:

-tell you nothing about the Marvel world and its story, and

With GI Joe and Transformers you had to look at the toys because every inch of them told you something about the character. Where does Grimlock's T-rex head go when he transforms into a robot? Go to a friends' house and look at him. The Marvel toys tell you less than the art you've already seen.

Marvel trading-cards--something with way less genuine play value than these toys--did way better. Because they promised some contribution to the story--one series had each heroes win-loss percentage ont he back, f'rinstance.

The broader point is no ten-year-old boy is going to go "I want toys with distinctive details that feed my sense of exploring an alternate world as large and imperfectly-knowable as our own". They're going to go "I like detachable weapons" and end up with Iron Man holding a fucking lenticular shield with Tony Stark's head on it.

Most people who saw all these toys as a kid could probably tell you now that they weren't going to trip over themselves to get the Marvel toys (even if they couldn't tell you why)--but the toy execs couldn't. And this was even though the design principles they were using ("toy guns good") were solid. You can't really design from the outside-in. You have to have ideas about why what you want people to love should be lovable.

Moral of the story: beware of "design principles". Love what you're doing and build out from there.

Secret Wars Toys As A Parable of Design, Detail and Giving People What They Want