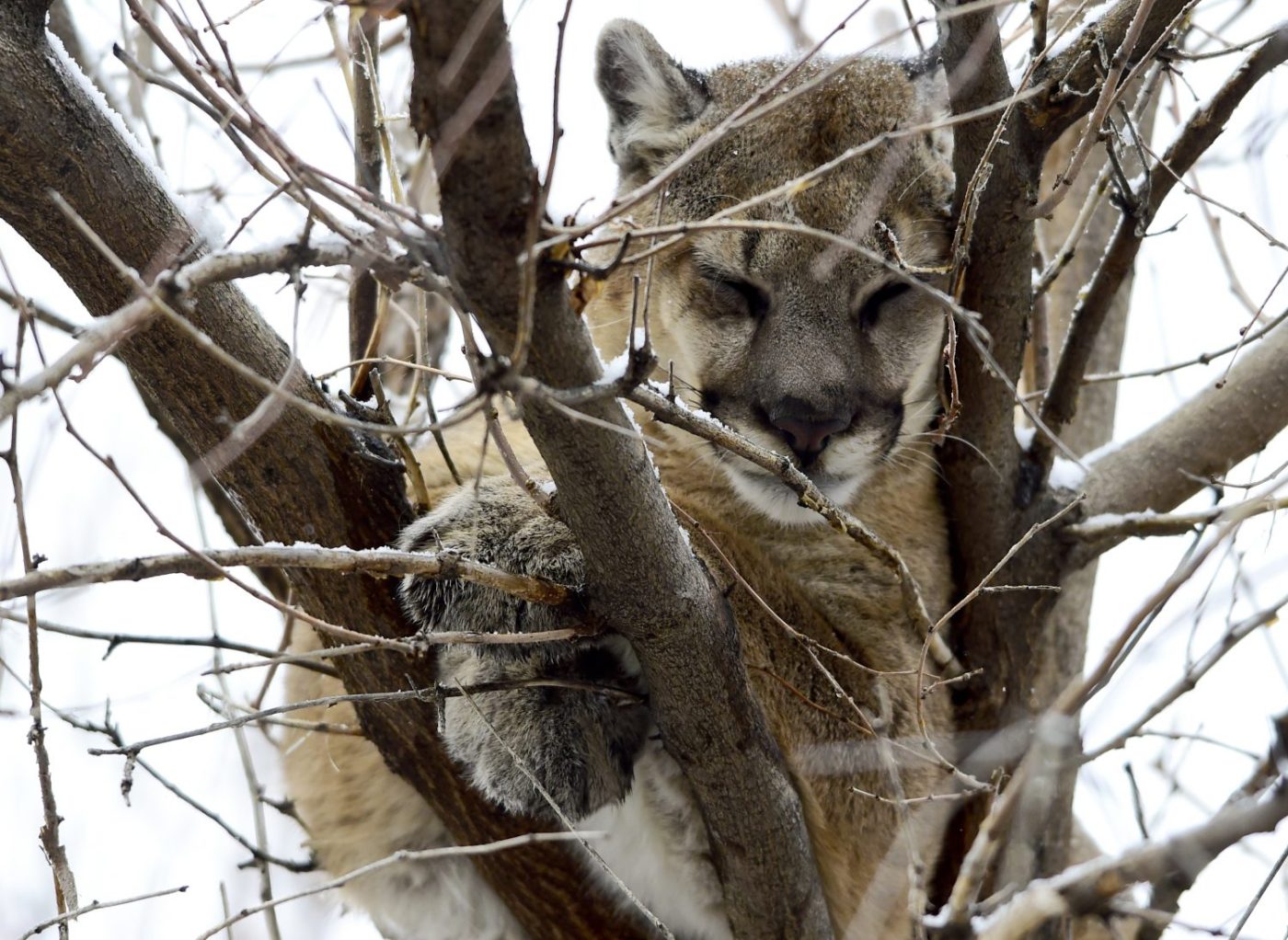 A snowy mountain lion visiting a Lee Hill home made headlines and popular retweets of the video last week. The large feline was stunningly beautiful, making massive paw prints across the patio while the family and their small dog were safely locked inside. The same week, we heard about a moose in Nederland who was “cranky” after being chased by a couple of dogs.

Springtime brings the joys of getting outdoors more and viewing wildlife, such as pods of migrating white pelicans performing what looks like water ballet while feeding on small fish in our lakes, as well as bears waking up and most mammal species getting ready to have their young. A glimpse of these moments is something like taking essential vitamins for us humans who are starting to see life as something closer to normal.

But there are also wildlife that, plainly said, can kill you. Nature isn’t Disneyland, and our lions are not Simba and Nala; cranky moose and mother bears present their own dangers, too.

We don’t say this to cause alarm, already there is too much of that when it comes to predators, especially lions, in Colorado.  Wildlife officers hear from people across the state living in mountain areas and nearby towns who want them to come “take the lions away” out of fear that is disproportionate to risk.

We don’t want to see the lions go away, and we are betting the majority of people in Boulder County feel the same. Lions are a wildlife heritage species in Colorado and they are incredibly charismatic animals. One of Colorado’s leading lion researchers, Mat Alldredge,  tells a great story about trying to trap a female lion, who after taking the bait on all sides around a trap set to capture her, decidedly pushed the cage filled with bait inside down the hill.

Lion attacks are rare and fatal ones uncommon — similar to shark attacks, where one incident gets widespread attention.  Fewer than a dozen people have been killed by lions in North America in more than a century; only three in Colorado in 1991, 1997 and 1999. It’s the lions that generally end up on the losing end when coming into contact with humans. They are struck on mountain highways, shot by ranchers protecting their sheep and livelihood, vulnerable to disease, fire, drought, starvation and loss of habitat.

An additional threat to lions in 2021, particularly in Boulder County where we love our wildlife, is a desire among many people to experience a wild connection, capture it and share on social media.  A good example is in Pinebrook Hills, where a lion by the side of a road last spring attracted people to stop and take pictures. It would have been much kinder to throw the phone at the lion, rather than take a selfie.

It sounds harsh, but as wildlife sightings have become more common (53 reported lion incidents in Boulder County in the past 12 months), caught on home security cameras, on people’s porches up and down the Front Range, there is a concern that human interactions could create lions who are more comfortable being around humans, and that’s not a good thing for anyone. Coexistence with lions is based on respect for a predator that can take down a full-grown elk, it’s not about making friends.

It’s not that we have more lions. What we have is a healthy, stable population that hasn’t changed in the past five years, with one of the higher densities across the Front Range, including Boulder.

Lions are notoriously difficult to count because they are so elusive, but our most recent study shows that approximately 4.1 lions inhabit each 100 square kilometers (39 square miles), across the Front Range corridor from Lyons to Interstate 70. Male lions are known to have a larger home range, over 500 square kilometers, and one in particular roams from Lyons all the way to Boulder Canyon. The message here is that you can find a lion, anytime, walking through your neighborhood.

And what are they doing? Lions follow their prey – deer mainly with fawns in spring – in nearby open space and prime mountain habitat where we’ve built our homes and gardens, and will make a meal out of raccoons and skunks that burrow underneath our porches. The great news is that lions aren’t habituated to us – yet. Meaning they are not setting up shop in our backyards, looking at us as a source of food.

But if we invite prey, we invite lions. We should listen to Alldredge, who has spent a lifetime understanding lion behavior, to avoid any conflicts. Create a safe play zone if you have kids and pets that is clear of vegetation, especially thick brush, limbs and ground cover that could offer hiding for an ambush predator. Always accompany small kids and pets outdoors, especially at dusk and dawn during prime hunting hours, make loud noises and check under your porch. If you have hobby farm animals, keep them inside a pen with a solid roof overnight.

Little things like being aware of your surroundings, taking one of your earbuds out when you are hiking, or installing motion sensor lighting on your house can go a long way with reducing conflict with lions, adds Boulder District Wildlife Manager Sam Peterson. If you encounter a lion, do not run. Face the lion and slowly back away, raising your arms over your head, yelling at it and picking up small children. If a mountain lion approaches you, begin to throw things at it if you can. If a mountain lion attacks you, fight back.

Thanks to science, we know how lions behave and what they don’t like, and that’s to be around us.  If we truly love lions, we need to keep it that way.

— Julie Marshall for the editorial board