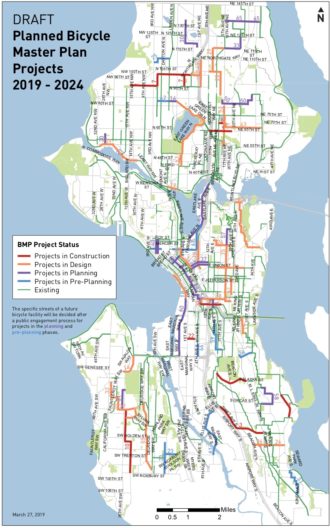 SDOT has announced a series of four “café-style conversations” about the latest short-term bike plan, which includes significant cuts through the life of the Move Seattle Levy. The events, produced with help from the Department of Neighborhoods, will be a bit more informal than a typical open house. Staff will give a presentation and be there to answer questions and collect feedback.

Unable to attend a meeting? Send comments to CCBike@Seattle.gov by April 30, 2019.

Meanwhile, Erica C. Barnett at The C Is for Crank has tracked down the details of 11 missing (or partially missing) projects in the latest draft of the short term bike plan. She did this by comparing the latest and previous plans project-by-project. Some of the missing projects were gone by mistake and will be restored (yay!). Some were listed inaccurately in the previous plan or have been moved to become a part of other projects. Others were cut, but left off the list of removed projects.

“Those missing projects include protected bike lanes around the city—from the University District to SoDo to Beacon Hill to the Rainier Valley—as well as basic bike lanes and neighborhood greenways,” Barnett reports.

In all, thanks to Barnett’s work, we know that the total miles of bike facilities removed in the update is closer to 30 than the 25 SDOT previously reported. Check out her report for details on those projects and responses from SDOT.