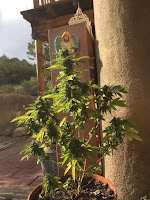 On Monday, the 21-person Oglala Sioux Tribal council voted 11-8 to again allow Gov. Kristi Noem to be able to visit the sovereign nation.

Gov. Kristi Noem has blocked industrial hemp from being grown in the state, but that’s not stopping Native Americans who can regulate their own hemp crops under the 2018 Farm Bill. Many tribes are drawn to hemp’s potential for bringing profits to communities that badly need it. They say that Noem’s resistance is giving them an advantage to getting into the market, even as it may complicate their ability to transport and sell it. [KNBN teevee]

With the selection of law enforcement industry patsy, Helene Duhamel to replace Alan Solano in South Dakota's legislature Gov. Noem has likely ended any chance of industrial cannabis (hemp) outside of the state's nine reservations. It's very brave, even progressive of Noem to give tribes a head start in America's budding cannabis industry.

A former chairman of the Sisseton-Wahpeton Oyate is a tribal liaison for a cannabis development firm.

South Dakota Secretary of Tribal Relations Dave Flute is a former chairman of the SWO.

If the political will existed South Dakota's legislature could write a bill that would adopt legislation similar to Minnesota's medical cannabis law but worthy of Federal Drug Administration scrutiny where real medicine could be sold by pharmacies.
Source: southdakotaprogressive