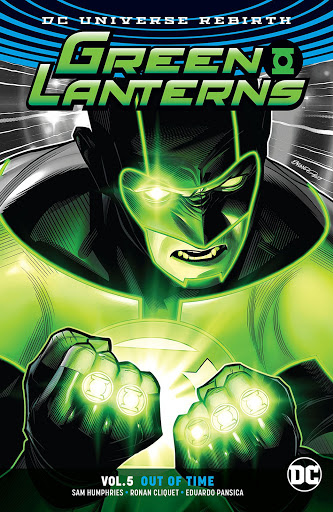 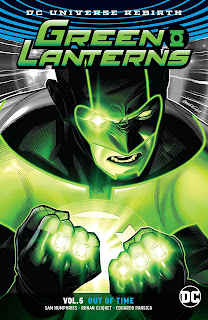 The Rebirth Green Lanterns Vol. 5: Out of Time is light fare, the finale to Sam Humphries' thirty-two-issue run that solidifies this as a failed experiment. We've got an astounding four more volumes (under different creative teams) before this book comes to an end, so maybe this title still has a shot at redemption yet. But with a boilerplate paint-by-numbers plot, Time takes what ought have been Green Lanterns most climactic moment so far and squanders it.

Of the six issues collected here, five are part of "Out of Time" and they unfold like this: 1) an issue of Lanterns Jessica Cruz and Simon Baz establishing they've been sent back in time, 2) an issue of the ancient original seven Green Lanterns fighting one another, 3) an issue of Jessica and Simon training those Green Lanterns, 4) an issue of the Lanterns fighting the villain Volthoom, and 5) an issue of Simon and Jessica fighting Volthoom. Humphries takes the story step by step by step in very predictable ways, and the "first Lanterns" emerge as so much fluff, figures on the page for the sole purpose of fighting one another or fighting Jessica and Simon or fighting Volthoom to pad out a story that's ultimately not made of all that much.

Humphries has spent a couple issues now teasing the "first Lanterns," but as diverse as they are, unfortunately it doesn't translate to viable characters. We get, for instance, a lone robot split from his collective (which, symptom of the problem, Humphries calls "the Hive" despite that name's ubiquity in the DC Universe), who spends a large part of the story alongside Simon. But despite that Simon uses the robot's "impossible shape" tactic later on, we get no sense of Simon having been affected by the other character -- Simon never mourns the character's death or mentions him again. It's the same with the other Lanterns, many of whom die without fanfare, again seemingly only there and gone to fill pages.

Given that these are the first Green Lanterns ever, there are no winks or nods to the present, as might be expected, nor any resonance to the fact that among the first Lanterns was a Kryptonian and a Martian -- a white Martian, hunted by his own people for reasons never explained, just like the Tamaranian here is a cat-person also for reasons unknown.

For me the salient question of Humphries' final volume was how he would address the rift between Simon and Nazir, Simon's brother-in-law, best friend, and literal partner-in-crime that Simon has neglected since he became a Green Lantern. This is intriguing in large part because Nazir represents a kind of normalized criminality as part of Simon's life -- that this is his brother-in-law with whom Simon stole cars and might still be if not for the Lantern ring, not that Humphries gets that deep with it. In the final superheroics-light house party issue (of the kind I might ordinarily like), Humphries locks the two in a bathroom to talk it out.

But Nazir's argument is picayune, that Simon has been "letting [his] family down" while he's been off as Green Lantern -- despite that why Nazir, a grown man with a family, needs his wife's brother around to feel complete is never quite clear. Humphries splits the difference -- with Simon finally agreeing that "it's not cool" (whatever "it" is) and Nazir granting that he's proud of Simon -- and in all whatever potential was here ends up as milquetoast as one might have expected.

It is a gift at least, however, that Humphries resolves the Simon/Nazir storyline, because other aspects of Humphries' run end the book unresolved. It is a nice touch that Jessica defeats Volthoom using the guidance of Kilowog from the last book, but again, what Jessica learns from this goes unexamined, along with any acknowledgment that Jessica is now responsible for having trained the first ever Green Lanterns (that she's now the first-first Green Lantern).

As always, Jessica's anxiety issues come and go as Humphries needs them; in the final story she balks at being at Simon's party, but then she's fine, and goes so far to refer to herself as a "pile of garbage" when she has to talk to an attractive man, but the joke is -- because Humphries often uses Jessica's anxiety for comedy -- that he likes Green-Lantern-Jessica instead, and that's about the sum of it. Despite the time Humphries spent on depicting the friendship between Volthoom and the Guardian Rami, that too gets little further acknowledgment or conclusion, nor does Jessica ever make the connection between this Volthoom and the Volthoom that embodied her first "power ring."

I have at various times in this series thought both Ronan Cliquet and Carlo Barberi did well with animated, accessible artwork. Cliquet is still good in this volume in a couple of chapters, but the book's biggest error is putting Barberi on the penultimate issue of "Out of Time," sunnily drawing the fight with Volthoom like a summer picnic and not the massacre that it is (Barberi's art is well-drawn, just tonally out of place here and exceptionally over-colored by Ulises Arreola). The two more realistically drawn chapters by Eduardo Pansica fit much better, especially the gritty training issue with inks by Julio Ferreira and colors by Alex Sollazzo, all three of whom were really what was needed to give the end of "Out of Time" actual suspense and heft.

Support Collected Editions -- Purchase Green Lanterns Vol. 5: Out of Time
From Green Lanterns' rather plain face-off with the Red Lanterns in the first volume, I think it was unfortunately clear this title was not going to be the blockbuster I'd hoped. In the Nazir storyline and in the Volthoom spotlights, Green Lanterns showed the potential for something great, and the very basic earthbound-Green-Lanterns-versus-supervillains moments still shine (some of The Phantom Lantern, some of Polarity). But Green Lanterns Vol. 5: Out of Time ends with a whimper, a cosmic time-travel story that's the opposite of this book's strengths, and that's unfortunate but not unexpected.

This post was syndicated from Collected Editions, the chronicles of a "wait-for-trade-er" -- the new breed of comic book fans who forgo monthly "floppies" for trade paperbacks and collected editions -- reviews, commentaries, low price alerts, news, and the occasional scoop. Visit collectededitions.blogspot.com.