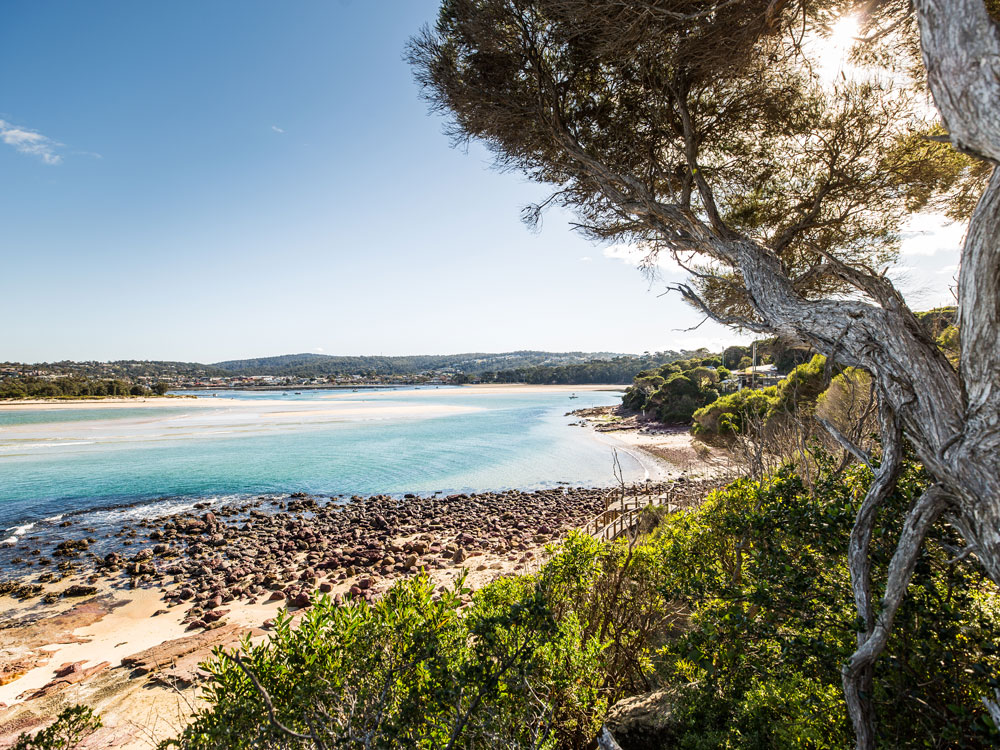 Be revitalised on the Sapphire Coast

The shape of water

Be exceedingly careful about making a wine-fuelled promise in a South Coast restaurant to a charming stranger who sounds like he is named after a Mafia wise guy.

The next morning, looking out to Tathra Beach’s significant horizon, ‘Fat Tony’ lays his right hand on my left shoulder as I prepare to fulfil my promise. The sea-spray uncannily parts; his silent seaward nod seals my fate. It’s time. 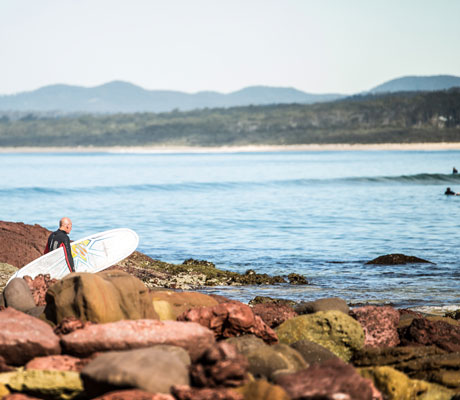 Surf’s up at Bar Beach

There are some things you should know about ‘Fat Tony’. His restaurant is one of the best places on NSW’s Far South Coast for well-considered lavish portions of fruit-of-the-sea-focused mod Oz.

Like Fat Tony himself, the service at Fat Tony’s Bar & Grill is unpretentious, more chinwag than transaction, and the vibe inside the heritage-listed former harbourmaster’s abode is grounded yet graceful.

Following the finest tradition of dry, obtuse and ironic Aussie nicknaming conventions, Ant(hony) Little is by no metrics fat, and he has no mafia connections to speak of either. What Fat Tony does have, however, is a story to share, so implausible that you would dismiss it as third-hand small-town folk tale, had his GoPro not borne witness to it.

“I was just out for a [stand-up] paddle, like a normal day,” Ant says. “A whale and her new-born calf were lolling beyond the breakers, so I paddled a little closer. A full-size southern right whale suddenly breached under my board. I literally got lifted into the air but, somehow, I kept my balance. I remember thinking, ‘Here comes the tail’, but luckily it went through.”

Fat Tony drip-feeds me this real-life fairy tale as we paddle out about half a kilometre through the surf to where it all unfolded. It’s my first time stand-up paddleboarding, but Ant’s genial confidence extinguishes my open-ocean angst. Unfortunately, there’s no sign of board-levitating leviathans today. But no sooner are we back on the sand, than Ant starts to whoop and point. “Look, a spout – straight out there.” So there is, 200 metres from where I just was.

The memories of water 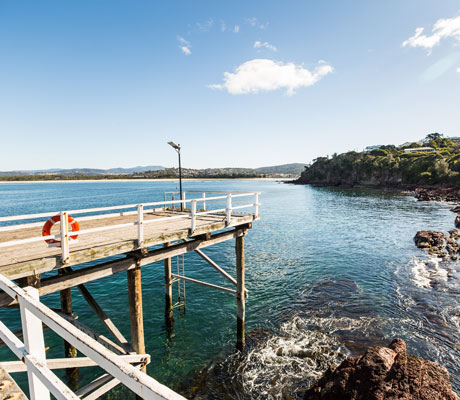 The shape of water changes that rapidly on the Sapphire Coast. Granted, Ant’s tale is an extreme example, but it’s not as random as you might think. You see, the residents of Tathra, Eden, Merimbula and their bracketing hamlets tend to find themselves in the right pristine place at the right pristine time more than your average human. 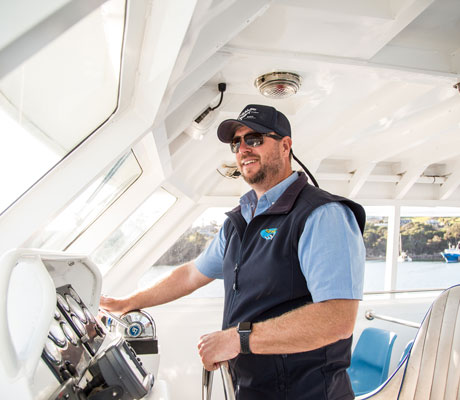 Take a spin on the water with Cat Balou Cruises

“My favourite [move] is the ‘spy hop’. They gracefully surface up to their eyes, do a 180, submerge, then gracefully swim away. It’s like ballet. And while we’re whale-watching, those show-offs are people-watching.”

It wasn’t always this way in immense Twofold Bay. As the 16-metre Cat Balou motors out from Snug Cove, past places like Quarantine Bay and the Whale Spit, Lana recounts macabre tales from Eden’s whaling past.

Fortuitously, humpbacks have swum their way back from nigh extinction, and hug the bays here in relatively prolific numbers, particularly abundant and frisky in the September-to-October migration. Words often fail Lana’s patrons at momentous moments like these, as if they’ve finally fulfilled a life-long quest.

“We get a lot of tears. Some people have waited a long time to see whales; it can be a very emotional experience,” says Lana, who grew up in these parts.

Jenny Robb on the other hand moved to Kiah in the ’80s. Slightly inland from Eden, it was a simultaneous tree- and sea-change. Apart from “some good cafes and eateries” nearby, her dreamscape is barely besmirched by superfluous infrastructure. Absolutely fine with Jenny, who indulges in the subtle energies of the riverscape for her business, Kiah Wilderness Tours.

A dense palisade of tall eucalypts conspires to keep Towamba River’s secrets a secret from the outside world. Atop one of her kayaks, Jenny shares stories of the silvery, slithering ‘barrier estuary’, which eventually finds its sea legs north at Twofold Bay, near the old Davidson Whaling Station. Quiet paddle plops barely break Towamba’s mirror and usually don’t dislodge spectating plovers, ducks and azure kingfishers.

“We see sea eagles swoop and catch fish; kangaroos swim across the river. We’ve even had a huge alpha-male Australian fur seal laying around in the paddock for days.” Back on shady, dry land, one of Jenny’s homemade muffins and a “personally plunged” coffee help to ponder such splendour.

The tastes of water

“All I knew about oysters was that you catch them out of the wild, you don’t have to feed them, and they’re not going to make a hole in the fence and run through the neighbour’s canola crop when you’re having a few beers at the bowling club,” says Sponge. 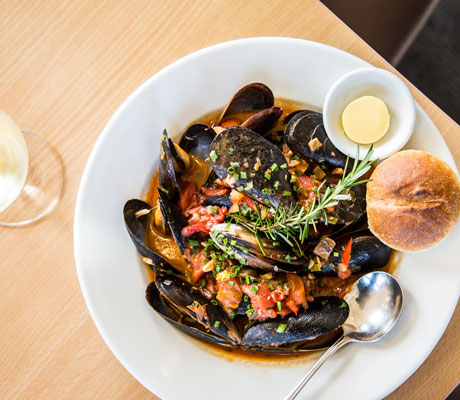 Fresh seafood is always on the menu at Merimbula Wharf

Today, Sponge runs a medium-sized oyster-farming concern from a “rustic shack”, with leases on Merimbula Lake, Pambula Lake and Pambula River, and enlightens the unenlightened masses on his two-hour Magical Oyster Tours.

The oyster-of-choice on the Sapphire Coast is the hardy Sydney rock and there’s one intensely local element that makes these the best oysters in the universe, according to Sponge.

“The water quality is great,” he says. “In Sydney or Melbourne, no one’s necessarily doing the wrong thing as far as water quality goes, but there is an ambient presence of pollution. We don’t really have any industry in our catchment.”

South Coast oysters find their way to tables across the country, but plenty don’t make it out uneaten. Broadwater Oysters on Pambula Lake charges about five fewer bucks per dozen than in cities. And they’ll shuck them right in front of you.

Nearby, Wheeler’s began its life as an aquaculture business that grew into a kiosk that blossomed into a swish restaurant. Those who used to ride their bikes up from the caravan park as kids to get their family’s fill probably won’t recognise the local institution now. Or the way oysters are served these days. Naturally, natural and Kilpatrick are still on the menu, as are Asian-flavour amalgams – Thai, Japanese and Shanghainese.

Yet not all eateries here try to out-seafood-linguini each other (it’s a thing). The Wharf Local cafe focuses on sublime sea views, sensational coffee and light, fresh and local land-bounties, all served out of a historic apricot-coloured wooden building atop Tathra’s old Steamer Wharf. “When we arrived seven years ago it was in need of TLC,” says Emma Benton (co-owner with sister Poppy). 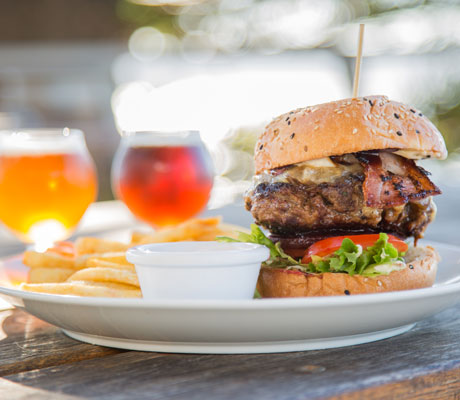 Do lunch at the Tathra Hotel

Given the tiny towns that surround it, The Wharf Local adheres admirably to its source-from-100-mile ethos: sourdough from Bermagui; double-smoked ham from Merimbula; eggs from Cobargo. Inevitably, there are constraints: sourcing seasonal veggies is tough, while the coffee hits the road from Canberra (Black Betty blend from Ona in Fyshwick).

The wharf itself has been an al fresco community hub for years. Anglers plop in their long lines off the tall woodwork, seeking deep-water dividends, from salmon to slimy mackerel. “We take them out coffees so they don’t have to leave their fishing spots,” says Emma. 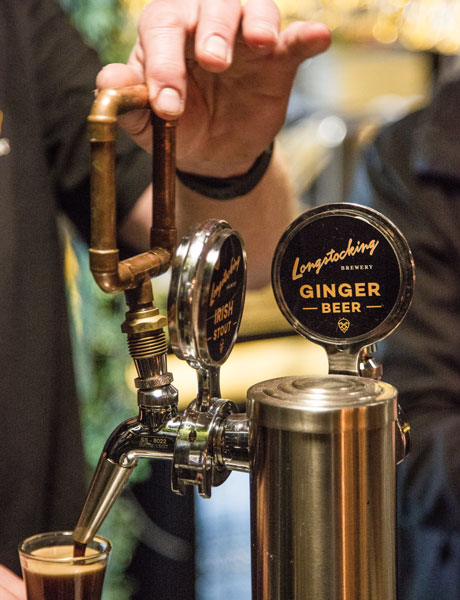 Pop into Longstocking Brewery for a pint

The moods of water

The white-picket fence around Green Cape Lightstation Keepers’ Cottages seems like the precise line between sanctuary and ungovernable nature. The 1883-vintage, pristinely whitewashed lighthouse, with its minaret-esque visage, stands lonely but resilient high on a gale-lashed point where the rugged broccoli-tree bush of Ben Boyd National Park gives way to the South Pacific.

NPWS field officer Greg Leayr loves his job, save for the extended time isolated from loved ones (nine-day shifts) and guests who turn up announced late at night. On a quiet night, you might find Greg on his Xbox, having finished taking tours, his caretaking duties and his daily battle with Socks. The rescue-wombat likes to leave strategic ‘calling cards’ at the cottage gates, which Greg scoops up and puts back near the wombat’s burrow every single day. 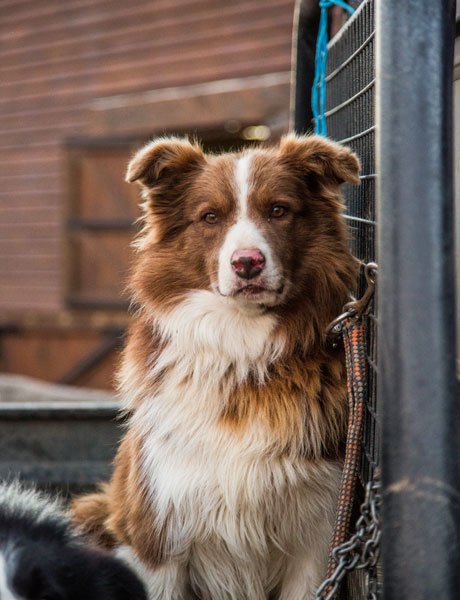 Meet some of the locals at Sapphire Coast

Naturally, this untamed apex of south-east Australia, 40 kilometres’ drive from Eden, is nirvana for those who like to just sit and watch.

“I’ve been very lucky to see Migaloo [a famous adult male white humpback], and a blue whale, too. It was fantastic to see the largest creature ever to inhabit the Earth,” says Greg.

Like the rest of the extreme South Coasters, it’s the shape of water that shapes Greg’s existence; the ocean is always communicating. To passers-by, life in these little settlements must seem like an infinite vacation. It’s a place still charmingly uncomfortable with formalities, where warm-hearted

The Sapphire Coast is a six-hour drive from Sydney and Melbourne, and three hours from Canberra.

Discover the other destinations and experiences that made it into our Top 100 Ways to Holiday Here This Year special edition of Australian Traveller.

The post Be revitalised on the Sapphire Coast appeared first on Australian Traveller.

Be revitalised on the Sapphire Coast