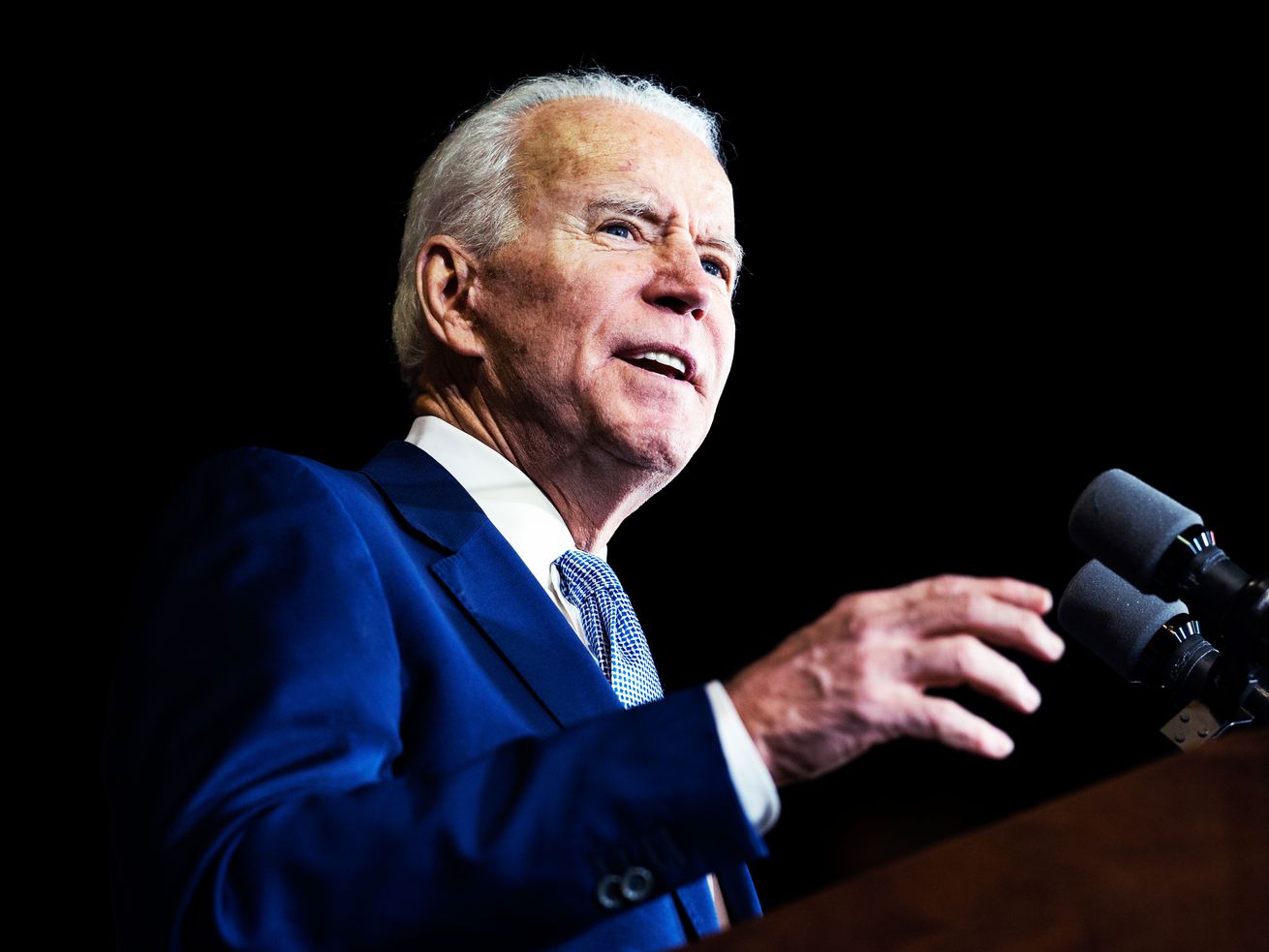 The plan emphasizes more addiction treatment and prevention — and less war on drugs.

Vice President Joe Biden this week released a plan to combat the opioid epidemic, the deadliest drug overdose crisis in US history.

The plan is the most detailed and expansive proposal on the opioid crisis released by any of the presidential campaigns, including Sen. Bernie Sanders, Biden’s current Democratic rival in the primary, or by President Donald Trump.

It would put $125 billion over 10 years — the largest funding commitment of any 2020 campaign — to scaling up drug addiction treatment and other prevention and recovery programs, paid for with higher taxes on pharmaceutical companies’ profits. It would also take steps to stop the overprescription of opioid painkillers while encouraging better care for chronic pain, and it would try to slow the flow of illicit drugs from China and Mexico. It would also take steps to “reform the criminal justice system so that no one is incarcerated for drug use alone.”

The opioid crisis remains a huge problem across much of the country. Although 2018 saw the first decline in drug overdose deaths in decades, more people died of drug overdoses that year than of gun violence, car crashes, or HIV/AIDS at its peak, and the toll of more than 67,000 was still the second-highest drug overdose fatality rate, after 2017’s, in US history. Meanwhile, there are signs that drug overdose deaths involving stimulants, like cocaine and meth, and synthetic opioids, particularly illicit fentanyl, are still rising. That’s why experts argue a much more ambitious investment is required to fight the crisis and prevent future ones.

Previously, Sen. Elizabeth Warren’s $100 billion opioid epidemic plan was widely considered the strongest in the Democratic field. But with Warren out of the race, that’s left an opening — and Biden’s plan actually commits even more funding than Warren’s.

Looking toward the general election, Biden’s plan can also chip away at one of Trump’s potential advantages. The president has a decent narrative on the opioid crisis, largely because overdose deaths fell in 2018. This issue also may have helped Trump in 2016: Historian Kathleen Frydl found that many of the Ohio and Pennsylvania counties that went from former President Barack Obama to Trump that election year were hit particularly hard by the opioid crisis.

But Trump also hasn’t actually done much about the opioid crisis. His administration has signed bills boosting funding by a few billion here and there, but the money has fallen far short of the tens of billions that experts say is necessary and the $125 billion Biden is now proposing. Despite Trump hyping up an emergency declaration about the opioid crisis, the Government Accountability Office found the declaration led to almost nothing. And Trump’s proposal to use the death penalty on drug dealers and build a wall at the US-Mexico border have been widely panned by experts as ineffective means to stop the flow of drugs.

This is where a plan like Biden’s could come in. With a lot of communities still suffering from the brunt of the opioid crisis and a potentially rising stimulant epidemic, Biden could draw a contrast with Trump and, in the context of the ongoing primary, attempt to show he’s more prepared to take on the opioid crisis than Sanders is so far.

More importantly, the opioid crisis is also one of the areas where there seems to be a real desire from both parties in Congress to get something done — and potentially save tens of thousands of lives in the process.

What Biden’s plan would do

Biden’s plan is quite long and detailed, but it effectively breaks down a response to the opioid crisis into five categories: boosting treatment, combating overprescription, holding drug companies accountable, reducing the flow of illicit drugs from other countries, and reforming the criminal justice system to stop incarcerating people for drug use.

On treatment, Biden’s plan emphasizes the role of the Affordable Care Act in expanding access to addiction treatment. Researchers estimate that Obamacare expanded health care, including treatment, to hundreds of thousands of people with addictions, and a recent study linked Obamacare’s Medicaid expansion to a 6 percent fall in opioid overdose deaths. Biden promises to continue that trend by building on Obamacare, particularly with a public health insurance option that anyone could buy into.

The plan then goes further, however, by calling for $125 billion to be spent on the opioid crisis. These funds could go to drug addiction treatment, including medications like buprenorphine and methadone that are considered the gold standard of opioid addiction care. They could also go to addiction and overdose prevention, such as the opioid overdose antidote naloxone and new education campaigns, and recovery services, like peer support networks and recovery coaches.

Biden also vows to crack down on the overprescription of opioids, which helped fuel the first wave of the current crisis. He promises to regularly update federal guidelines on when the drugs should be given out, and he will tie the $125 billion in funds to states requiring every prescriber to check a prescription drug monitoring program database “every time they write a new opioid prescription.” He also promises to scale up non-opioid alternatives to pain treatment so medical professionals don’t feel as compelled to resort to opioids.

Biden calls for more accountability of drug companies, which have been accused — and in some cases convicted — of misleadingly marketing opioid painkillers to get more people to prescribe and use them even when they weren’t truly necessary. The plan would direct the Justice Department to conduct civil and criminal investigations into the issue, get the Drug Enforcement Administration to better track and stop suspicious opioid painkiller shipments, and “ban drug manufacturers from providing payments or incentives to physicians and other prescribers.” And the $125 billion in funds would also come from higher taxes on pharmaceutical companies’ profits.

On illicit drugs, Biden promises to work with other countries, particularly China and Mexico, to slow the flow of drugs into the US and increase resources at home to help government agencies, such as the Postal Service, catch shipments of illegal drugs.

Finally, the plan would push to stop the incarceration of anyone for drug use alone — directing people who use drugs to treatment through drug courts and social services instead of jails and prisons at the federal level, plus encouraging municipalities and states to do the same. This would be a significant shift not just in US drug policy but for Biden, given that he led much of the federal efforts that culminated in the war on drugs in the 1980s and ’90s (although Biden was supportive of drug courts back then too).

Biden’s plan puts him ahead of his presidential rivals

Although Trump initially claimed on the campaign trail that he would “spend the money” to fight the opioid crisis, his funding boosts have fallen far short of what experts have called for, and a bill he signed to tackle the crisis was criticized as “simply tinkering around the edges.”

Instead, what Trump has focused most of his personal attention and speeches on has been “tough on crime” and “tough on drug” approaches. There’s his call to use the death penalty on drug dealers, which is discredited by research showing that tougher criminal penalties don’t slow the flow of drugs into the US. There’s his effort to build a wall at the US-Mexico border to stop drugs from coming into the country, which experts have panned in large part because most illicit drugs come into the US through legal ports of entry that the wall does nothing about.

Biden, meanwhile, wants to put less emphasis on the “tough on crime” approach to drugs. And while he promises to work to stop the flow of drugs into the US, he also commits to a sizable boost in funding to treatment and prevention — dozens of times over what Trump has implemented or himself proposed.

Compared to Democratic primary rival Bernie Sanders, Biden’s plan is much more detailed and comprehensive. Sanders has not put out a plan to fight the opioid epidemic; he’s instead told reporters and activists that his Medicare-for-all plan would boost access to treatment, while signing onto Warren’s $100 billion bill, emphasizing alternatives to prison and support for harm reduction strategies like needle exchanges and safe injection sites in his criminal justice reform plan, and introducing legislation that aims to “hold CEOs of drug companies criminally liable for illegal advertising, marketing, or distribution of opioids.”

One element that’s missing from Biden’s plan: It doesn’t provide much detail about what he would do to ensure not only that treatment is more accessible and affordable but that it’s evidence-based — something that’s often not true in addiction treatment. Experts, activists, and providers have called for stronger regulation and oversight of the treatment industry to ensure higher quality, but so far Congress has taken no significant action to address the issue. (Biden’s campaign didn’t respond before publishing time to questions about his plan.)

President Biden could actually get this done

The Democratic primaries have focused quite a bit on ambitious policy proposals, from Medicare-for-all to the Green New Deal, that are frankly not likely to get done even if a Democrat wins the White House, especially if Republicans keep control of the Senate. Biden’s opioid epidemic plan, however, signals at one policy area in which something could really happen.

Several Republican senators, including Rob Portman (OH) and Shelley Moore Capito (WV), have shown a lot of interest in getting work done on the crisis. Among the few major bills that Trump has signed, an opioid epidemic bill was among them — even if it was criticized by experts for being too little, too late.

There’s good reason to be skeptical about whether Biden could get the full $125 billion he’s proposing to fight the opioid epidemic. One of the things I have heard quite consistently from sources on the Hill is that Republicans in particular are very skeptical of spending too much money on addressing the drug overdose crisis. That dynamic will continue into a Democratic administration, likely even more so as Republicans become resistant to giving a Democratic president a victory.

It’s also possible that the issue could become even more pressing in the next few years. If opioid painkiller overdose deaths plateau and deaths involving fentanyl, meth, and cocaine continue to increase, the next few years of overdose deaths could top records once again. That wouldn’t be unprecedented, as overdose deaths plateaued in 2012 before increasing to record highs in subsequent years. And experts are already warning about the continuing spread of illicit fentanyl and a potential stimulant epidemic.

So the next president, whoever it may be, will likely get a chance to act on the opioid crisis. Biden’s plan gives him a serious framework to do that.