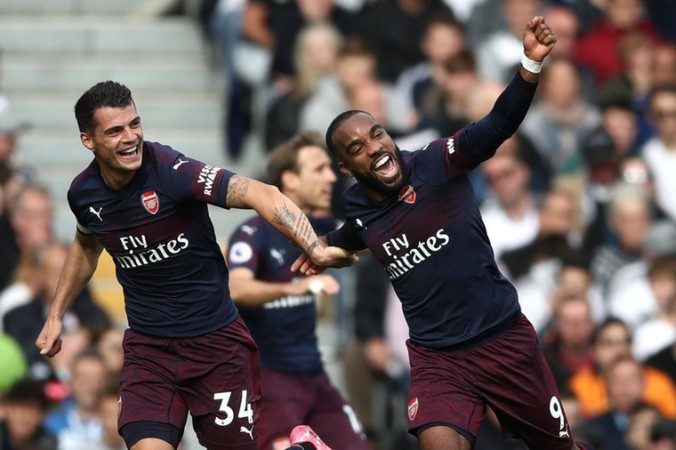 We love a scapegoat we do. And the Gunner-goat of the summer is without any doubt Granit Xhaka.

I reckon you can judge somebody’s football intelligence on their views re Xhaka. If you don’t get what Granit brings to the team and the role he is playing for us, but rather like to focus on his occasional brain-fart, then I seize being interested in speaking to you. The problem, however, is that I cannot ignore you because I run a blog and can see that this collective digital Xhaka-goading could well lead to our Swiss Maestro leaving us this summer. Time to put the record straight and fight the Xhaka-ignorance all the way!!

Granit is in the top-four of the entire PL for average passes per game, only behind LaPorte, Jorginho and Van Dijk. He is, no doubt, the fulcrum of the team – everything revolves on making Granit tick like a Swiss wristwatch. If Granit is buzzing, the team is buzzing.

Our deepest laying midfielder produces 1.4 key passes per game, as many as LaPorte (0.4), Jorginho (0.8) and Van Dijk (0.4) combined; the Swiss is second re this at Arsenal (behind the other ‘misunderstood’ Gunner… Mesut). Xhaka is The Key Player in our team and, no doubt, first on Emery’s team sheet. He was also this pivotal to Arsene. Furthermore, Granit leads the team in terms of average number of long balls and crosses. He also is our joined-MOTM for the season (four times), together with the much more openly loved and appreciated Laca and Auba.

Because so much is expected of Granit and he is receiving the ball constantly, and often in dangerous areas, he will make the occasional mistake… and some have cost us. He has also made some painful unforced errors which have cost us. There is room for improvement, but guess what, Granit is only 26 and his best years are yet to come. He will get better and better at avoiding these mistakes, and a more solid defence behind him would also help tremendously. Key is also to partner him more ‘horizontally’ with Torreira, so they can be a joined-up wall all over the midfield (something Unai just doesn’t seem to value as a constant requirement).

Granit is always looking for moving the ball forward intelligently. He makes himself available by moving into the available space and has already clocked what he will do next before he receives the ball. He does that for 90+ minutes and it gives the team purpose, momentum and structure. It must be said that the lack of quality wingers (and having to play without the very important Bellerin for most of the season) has not made it easier for Xhaka to play his quality long and through balls this season. Yet he strutted his stuff game after game and was our fulcrum for most of the season (he struggled with injuries at times and only managed to play in 29 PL games – and let’s not forget he played a lot of games during the World Cup last summer).

So let’s give it up for Granit Xhaka and show him our love before it is too late. Let’s make him our permanent captain, improve our defence/defensive play behind him and give him some good wing-players to be able to stretch opponents again. If you want us to get out of our current predicament you  better start openly appreciating Granit. I am sure they will lift him up where he belongs, and it would be sad and painful if that were not to be at the Home of Football.