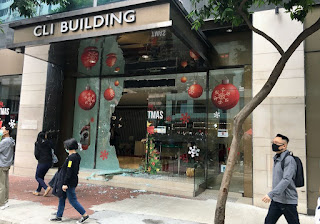 At the New Year’s Day Protest March today, my wife and I stumbled upon something very puzzling.  Around 3:45 PM, we were marching on Hennessy Road in Wanchai towards Central, passing in front of the CLI Building, just before the junction with Tonnochy Road.  We were in the middle of the crowd when we heard several very loud Bangs coming from the direction of the CLI Building.  At first, we didn’t quite know what was going on.

Pushing through the crowd, we could see some big glass windows were broken. The noise was most likely coming from someone breaking the glass.  Several people dressed completely in black were running away.  One was running towards Causeway Bay, but several others were running towards Central, then around the corner and northward along Tonnochy Road towards Lockhart Road and the water front.  Many marchers were chasing the black-clads.  Shouting after them: “Are you undercover police?” 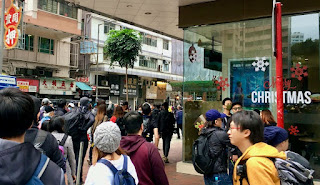 I decided to follow the bigger group that ran northwards on Tonnochy Road.  We were flabbergasted when we found more than 10 police officers in riot gear standing on Lockhart Road, no more than 50 meters from the scene of the broken windows. 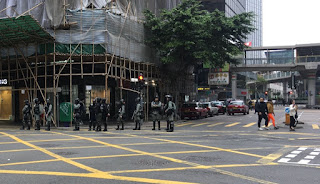 By this time, the black-clad vandals were nowhere to be seen.  Seeing that there did not seem to be immediate danger, we decided to walk towards and then past the riot police, to see better what was going on. 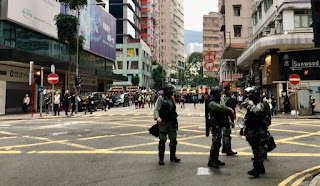 Amazingly, we found most of the police actually moving away from the crime scene, further north towards the footbridge on Jaffe Road.  By then, there was a big commotion at Hennessy and Tonoochy.  People were talking, shouting, pointing, gesturing, …  Instead of moving in to investigate, the police were actually retreating from the crime scene, as if it is not their concern.

On the other hand, we have to wonder.  If you were the vandals, you must have planned your actions in advance.  Why would you flee TOWARDS the police?  Do you know IN ADVANCE that the police would not give chase?  That is incredible.
Of course, one possibility is that those vandals are actually undercover police.  That was what many of the marchers were saying.   They were very angry at the vandals, who put the peaceful march at risk, who put every marcher at risk.  Many were convinced that they were police provocateurs who were vandalising businesses to give the police an excuse to suppress the peaceful marches.
This case that we witnessed with our own eyes is very puzzling.
But one thing is very clear.  The depth of the hatred towards the police is unmistakable.  There were so much insults, curses, middle fingers, …, directed towards the police all along the march whenever police officers are in sight, and often even when no police are in sight.  It is not just a few people who did it.  But hundreds upon hundreds, perhaps much more.  This depth and breadth of ill feeling was certainly not there before June 2019.  The case with the vandals that we witnessed today is part of the reason why such hatred is there.

It is very troubling.  If the police and the government continue to try to explain it away simply as the result of fake news, they do not deserve the trust that they are asking for.  At the least, they are not competent.  Worse, they are neither honest nor honourable.