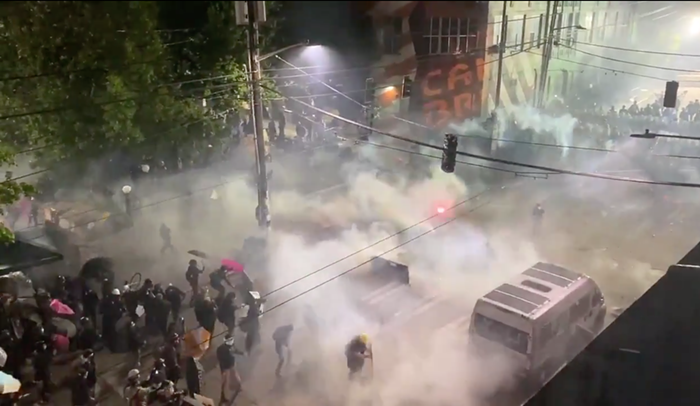 The city of Seattle is being sued for allowing SPD to use "unnecessary violence" against protestors, like what unfolded during the early hours of June 8 Courtesy of Chase Burns
The family of Manuel Ellis is calling for an independent investigation of his death in Tacoma police custody, saying that the Pierce County Sheriff's Office has "too many conflicting interests to independently investigate this homicide." KING 5 reports that Ellis died on March 3 after being handcuffed by Tacoma Police. The Pierce County Medical Examiner's report ruled his death a homicide after finding that Ellis died of lack of oxygen due to being restrained.

The city of Seattle is being sued for violating the constitutional rights of people at protests by allowing SPD to use "unnecessary violence", reports Daniel Beekman at the Seattle Times. Seattle firm Perkins Coie, ACLU, and Seattle University School of Law filed the lawsuit on behalf of Black Lives Mater Seattle-King County, four protestors, one would-be protestor, and Nathalie Graham and Chase Burns of our own paper. Mayor Jenny Durkan and Seattle Police Chief Carmen Best are being called out in particular as "responsible for authorizing the police actions." More from Beekman:

The lawsuit alleges the city has deprived protesters and others of their First Amendment rights by using chemical agents such as tear gas and pepper spray, as well as projectiles such as flash-bang grenades and blast balls, to crack down on the free-speech demonstrations sparked by the police killings of George Floyd in Minneapolis and other Black people. The lawsuit also alleges the city has deprived protesters of their Fourth Amendment rights by subjecting crowds to excessive force.

I'm joining @gramsofgnats in this lawsuit as a plaintiff. The declaration is being finalized and will be submitted soon. https://t.co/0ybLBuVsFA

Beyoncé and her mom, Ms. Tina, want you to get tested for COVID-19: Beyonce's BeyGood initiative and Ms. Tina's #IDIDMYPART partnered with local community organizations to set up free drive-through testing and essential supplies in South King County. Nathalie has more details, as well as an interview with King County immigrant and refugee policy advisor Hamdi Mohamed, here.

Washington state's COVID-19 death toll goes up by another 15, bringing the number of coronavirus-related deaths to 1,176 total, reports KOMO. The Washington Department of Health also confirmed 313 new cases of the virus in its latest report.

COVID cases going up in Washington, mostly as a result of Yakima (not protests). King County v. Yakima County: pic.twitter.com/irk9p6ILdX

#BlackLivesMatter and the movement to remove statues of white supremacists is global: Today, authorities in Antwerp, Belgium removed a 150-year-old statue of King Leopold II after recent protests against racism targeted it. If you weren't familiar with Leopold before this moment, the motherfucker ran Congo as his own personal colony in the late 19th century, exploiting and killing millions of Congolese people in one of the most brutal colonial regimes in history. This removal comes as thousands of Belgians are calling for their country to reconsider monuments to Leopold—the New York Times has more on it here.

#Antwerp authorities have removed a statue of colonial Belgian King Leopold II after the weekend’s #BlackLivesMatter protest. The campaign to remove all of them continues. #DRC #KingLeopoldII #Belgium pic.twitter.com/7Io5uAfcMK
— Jack Parrock (@jackeparrock) June 9, 2020

Paramount cancels Cops after already removing the show from its schedule in light of worldwide protests against police brutality, reports The Hollywood Reporter. The show's 33rd season was meant to premiere on Monday.

Trump speculated that the 75-year-old man shoved by Buffalo police officers was an "ANTIFA provocateur" going on to suggest that the incident was a "set up." Hmmm. The man, Martin Gugino, was a longtime peace activist and is still hospitalized from injuries sustained from the encounter. Trump offered no evidence of this conspiracy and was condemned by Governor Andrew Cuomo, who called his comments "cruel and reckless." Even if this WAS a setup, the officers really took the bait, huh?

Someone edited the East Precinct's archway: I think I'm liking the sound of "Seattle People Department" more and more...

Seattle Public Schools is moving to suspend the district's partnership with SPD reports Dahlia Bazzaz at the Seattle Times. The district's superintendent Denise Juneau said the resolution would “re-evaluate our relationship with SPD and enact a district-wide one-year suspension.” The measure comes after several school districts across the country have announced similar efforts and is expected to be voted on June 24.

Lollapalooza 2020 is canceled and going online: Instead of thousands of festival-goers toasting in the summer sun, the music fest will host a weekend-long livestream event over the same dates that will feature new and archival sets, footage from the '90s, and more.

It's going to be breezy tonight: Also, NWS Seattle has got jokes.

Your 7 day outlook, Seattle. Which reminds me:

What do you call 2 straight days of rain in Seattle?

What does daylight-saving time mean in Seattle?

An extra hour of rain.

Visitor: "When do you have summer here?"

See you out there, CHAZ: Rich Smith, Chase Burns, and I are going to be reporting from the field tonight. Follow along on Twitter. And if you're feeling oh so kind, maybe slip something into our donation box while you're at it.