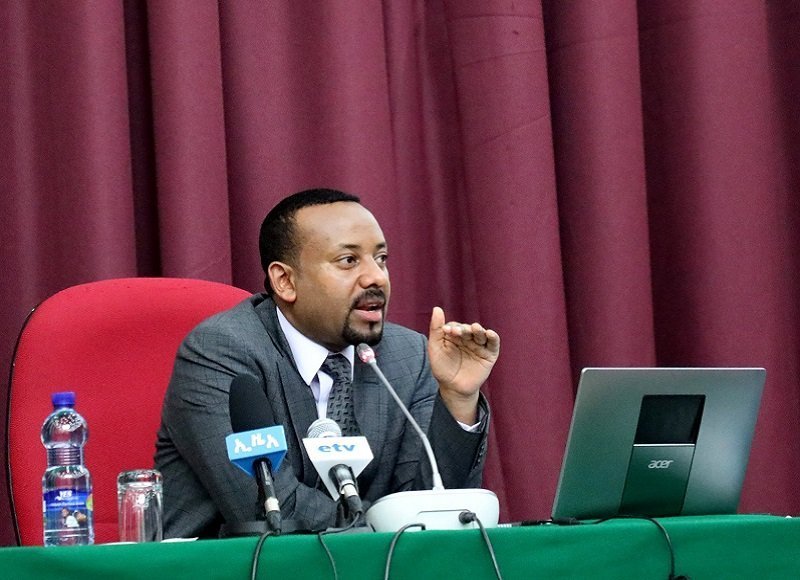 Ethiopia was under a “minority clique” for three decades, says Abiy Ahmed

Ethiopia has been under increasing pressure in the past few months in connection with the situation in the northern part of the country. Abiy Ahmed tries to explain what happened to the African Union. “The Tigray People’s Liberation Front (TPLF) was carrying out  missions to make Ethiopia ungovernable, “ he said.

Ethiopian Prime Minister Abiy Ahmed delivered a statement to the African Union Peace and Security Council regarding the situation in the northern part of the country and the root causes of it. He used his statement to portray TPLF both before and after they lost their power domination in central government.

Claiming that his administration has been undertaking reforms to ensure a “true democracy,” he said that the three decades before him was marked by “state capture by a minority clique.” He was making a reference to Tigray People’s Liberation Front (TPLF).

Furthermore, he accused the TPLF of instigating ethnic animosity and suppression of dissent.

He said, “To maintain power and control, the TPLF pitted ethnic groups against one another, fueling resentment, mistrust and animosity, while utilizing state power to suppress any form of dissent.”   He even went to the extent of referring to them as “the architects of ethnic and religious divisions.” In that he does not seem to be alone as the majority of Ethiopians tend to think that way.

Moreover, he accused the TPLF of his administration reform agenda which he said was formulated based on “demands and needs of the Ethiopian people.”

Not just that. The TPLF, he added, exploited networks and systems they built over three decades to sabotage his government’s reform efforts.

How so was TPLF doing that? Mr. Abiy said, “the TPLF embarked on a wave of overt and covert operations to make Ethiopia ungovernable.” They tried to manipulate the fault lines they created during their three decades of their rule.

He also talked about rapprochement efforts that his government had been making to engage TPLF before his government launched a law enforcement operation following the attack against the Northern Command of the Ethiopian Defense Force.

“Behind closed doors as well as in public appeals, my administration made numerous efforts to calm the belligerence,” the outcome of which was more provocations on the part of TPLF, as indicated in the delivered statement.

“As the TPLF’s orchestrated attacks on innocent civilians throughout the country intensified, public pressure mounted for a response,”  but  the effort to engage the minority clique continued unabated.

He said that “national elders” were sent  “to Mekelle and facilitated dialogue platforms to take place in Addis Ababa– which were all rebuffed by the TPLF.”

What drastically changed the appeasement policy was when the TPLF attacked the Northern command of the Ethiopian Defense Force on November 4, 2020.

The Prime Minister told the African Union Peace and Security Council  that “The deliberate and heinous attack on the Northern Command of the Ethiopian National Defense Forces, is a crime of high treason under the Constitution and the laws of the land.”

He also highlighted what TPLF did in the ensuing weeks after November 4. Missile attacks to Bahir Dar and Gondar, destruction of infrastructure in the Tigray region  including electric power line and Telephone lines, and that 10,000 convicted criminals from correctional facilities in the region were set free with the aim to make the region ungovernable to the transitional Tigray region administration which was established by the People’s House of Representatives. Moreover, they committed massacres of innocent civilians at Maikadra (Human Rights Organizations have confirmed that hundreds of innocent civilians were massacred).

The African Union Peace and Security Council is also briefed that operations to capture those responsible for the crime is still underway. At the same time, it was said, the government’s priority is “rebuilding the Tigray region and ensuring that our citizens in the region regain normalcy to their lives.”

Power and electricity is restored, and banks are fully operational.

Join the conversation. Like borkena on Facebook and get Ethiopian News updates regularly. As well, you may get Ethiopia News by following us on twitter @zborkena

The post Ethiopia was under a “minority clique” for three decades, says Abiy Ahmed appeared first on Borkena Ethiopian News.

Ethiopia was under a “minority clique” for three decades, says Abiy Ahmed