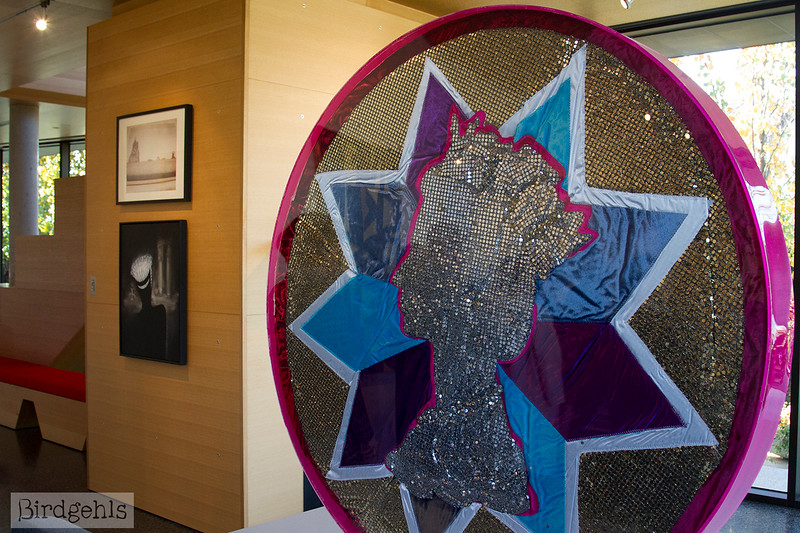 A Museum, or a House?! The Lyon Housemuseum in Melbourne

Melbourne is the destination in Australia to head to if you love art. There’s wonderful world-class galleries and smaller equally-delightful spaces. The city itself is a canvas for street artists around the world. Here’s one contemporary gallery that doubles as a private residence – the Lyon Housemuseum in Kew.

Inside the Lyon Housemuseum in Kew. That’s God Save the Queen (Coin) 1995-2003 by Constanze Zikos.

Melbourne has a few hidden gems and well-kept secrets. One for lovers of art and design is the Lyon Housemuseum.

You may ask – a Housemuseum? What on earth is that?

Well, it’s simply as the name suggests – a museum that’s also a house, an idea born and bred here in Melbourne.

And the best thing of all – this house opens up a couple of times a month for private tours.

Lovers of art in Melbourne, this is certainly one for you.

Read more: Guide to the Silo Art Trails of Victoria

Disclosure: This page may contain affiliate links. Clicking through for additional information or to make a purchase may result in a small commission. Please see my privacy policy if you require more information. Thank you.

The exterior of the Housemuseum and accompanying gallery.

Visiting the Lyon Housemuseum in Kew

As someone with a very enthusiastic appreciation of both art and design, a visit to Lyon Housemuseum had been high on my list.

It’s both a private residence and art gallery, owned and operated by the Lyon Foundation.

The Lyon’s are the family who reside inside the Housemuseum – renowned third-generation architect Corbett Lyon, his wife Yuejin and their two daughters. 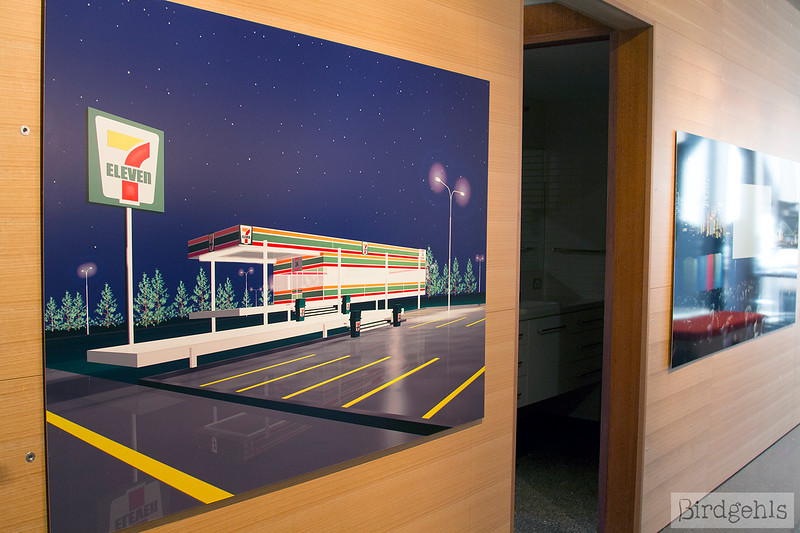 Farnshaven Illinois, 2001 by Callum Morton. I love this.

History of the Lyon Housemuseum

The Lyons have been collection art for over twenty-six years. Their collection comprises over 350 works, particularly from Australian artists such as Patricia Piccinini, Brook Andrew and Howard Arkley.

They needed a space to house their growing art collection and too, wanted to exhibit it to other appreciators of art and design.

So, the concept of a “Housemuseum” was born – the first of its kind in the world (although a second now exists in Melbourne).

Open since 2009, it’s the perfect melding of brilliant design and contemporary art, in affluent Kew.

The Lyon family live their lives out among these extraordinary pieces and those interested in art and design can head to the Housemuseum, to see these works for themselves.

Read more: The Small Town in Victoria Covered in Murals

We arrive one chilling winter’s morning and on entry, hand our bags over to Yueji.

She slips them into a cupboard door, which closes seamlessly into the wall. You’d never even know it was there.

This is the basis of good design, as far as Corbett Lyon’s work is concerned. Clean, crisp, unique and practical – these are the words I’d use to describe his home.

Everything has a purpose. There is intent behind every design-related decision. 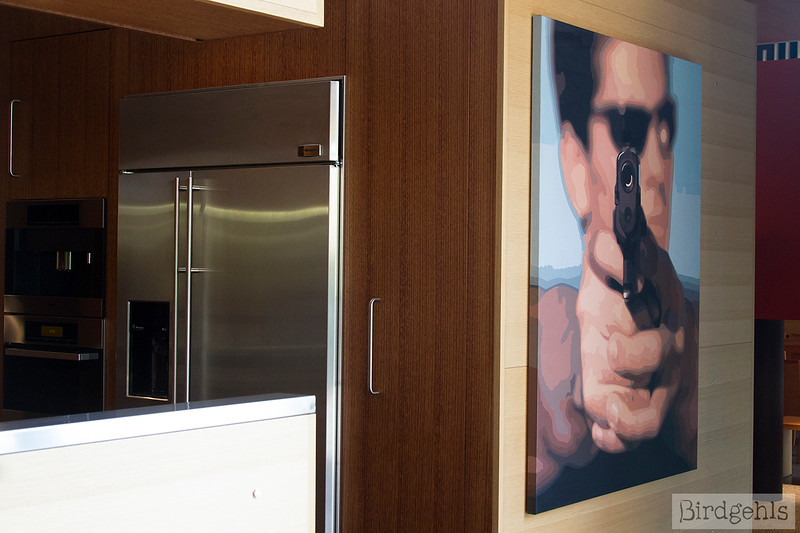 The Shooter, 2011 by Christopher Langton. The gun seems to follow you wherever you go.

There’s doors that double as walls, walls that reveal hidden cupboards and spaces, to file away clutter and personal belongings.

Some even swing open to reveal hidden artwork.

We’re led through the bottom level of the Housemuseum. Along the way, tiny details are revealed that demonstrate the amount of thought that went into the construction of this house.

I most appreciate the thousands of tiny words printed on walls and ceilings around the house – notes and sentences from the family’s everyday life. If memory serves me correctly, the words spell out the letters ‘A-R-T’.

Let me walk you through some of the features, within the Lyon Housemuseum.

The piece de resistance of the place is the large concert organ, built into the wall of the “music room”.

With the press of a button, you can be transported to Italy, Germany, France… what feels like another century, another time.

Later on in the tour, we will sit in the room, next to a permanent work by Brook Andrew, under the watchful eye of the Queen in a famous portrait taken by Polly Borland.

Corbett at the organ.

Corbett will play us Bach’s Toccata and Fugue in D minor, BWV 565. It’s one of my favourite pieces of classical music and I am delighted.

He tells us he played the organ as a child and designed this instrument so that he could take it up again in his fifties. I resolve to make more time for hobbies. 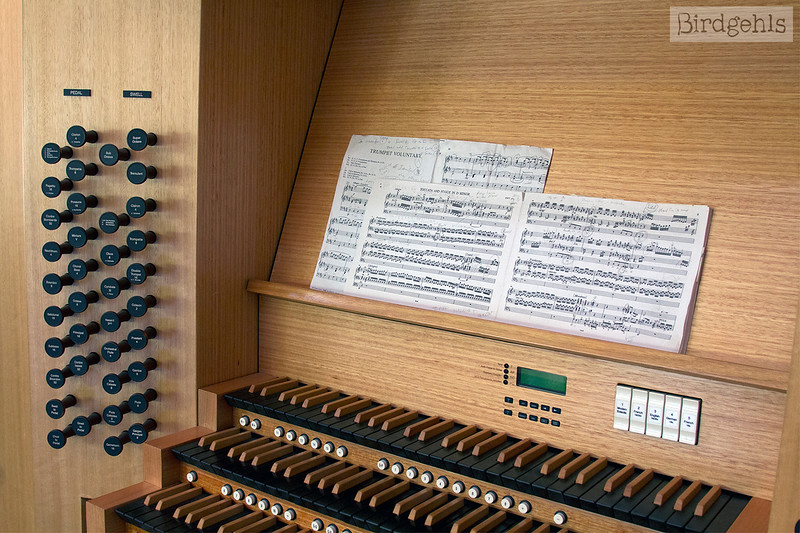 Close up of the organ. Magnificent. 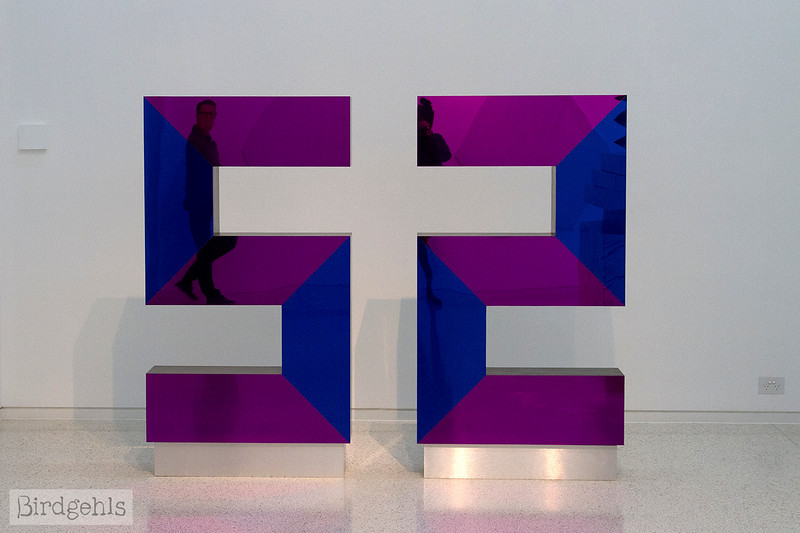 The ‘white cube’ gallery has ever-changing pieces. This is ‘The Vertical Sovereign, 2011’ by Constanze Zikos.

There are two gallery spaces within the Housemuseum.

The ‘white cube’ next to the kitchen hosts changing exhibitions. One feature I admire is the glass windows at the top of the walls.

They allow you to peer into the works in the cube from the top floor and in turn, gaze up from the bottom.

Corbett notes that these windows horrify designers of contemporary galleries, who aim to keep these sort of spaces contained, so the focus is on the art within them.

The ‘black cube’ can be entered from the music room and showcases video art.

The room doubles up as a sleepover space for Corbett and Yuejin’s two daughters, for whenever they have friends over. 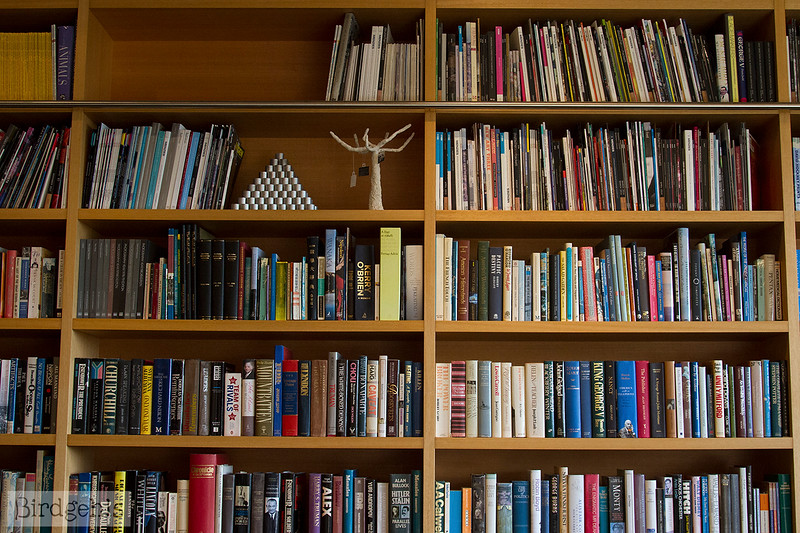 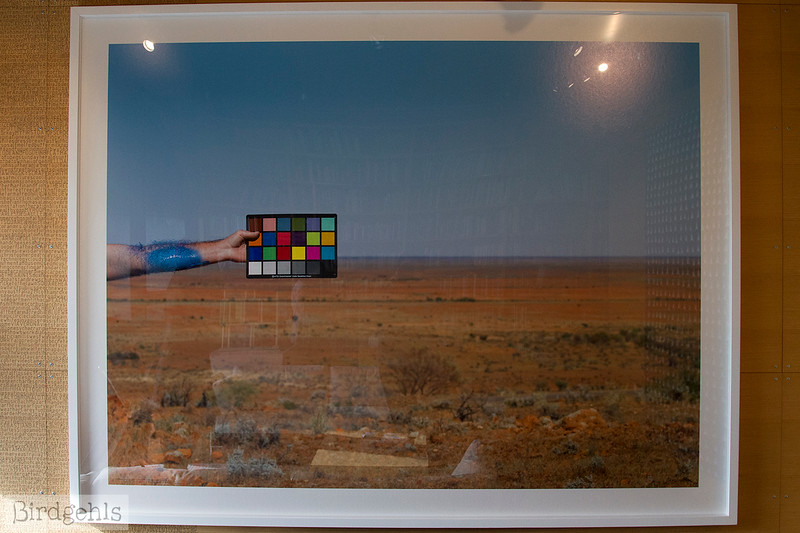 The tour ends in the library, where all good things are usually kept.

There’s some great books housed in here. I guess the art is pretty good too.

As an aside, there are a few items in the Housemuseum that are very ‘Melbourne’.

I love this work by Callum Morton. He has taken inspiration from bronze statues around Melbourne that people may not necessary notice, covering them with plastic to create new sculptures.

Can you guess who this statue represents? Hint – it’s two ill-fated explorers, who attempted to cross 3,250 kilometres of this country in the 1800s.

If you know who it is, chuck your answer in the comments. If correct, you’ll gain the satisfaction of being right. Well done to you.

Let’s explore a couple of other famous pieces. 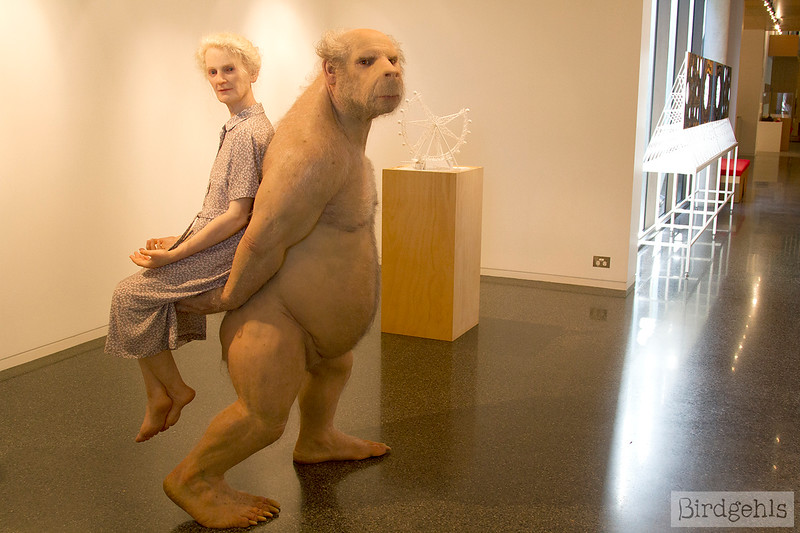 The Carrier by Patricia Piccinini, which lives in the Lyon Housemuseum.

This piece of work by Patricia Piccinin is one of the most famous to be contained within the Lyon Housemuseum.

It’s the kind of work that both people and social media love, so bizarre is its appearance.

It features a humanoid figure, part man and part animal, carrying an elderly woman on his back.

He looks quite content to be doing the carrying. She appears pleased to be there. 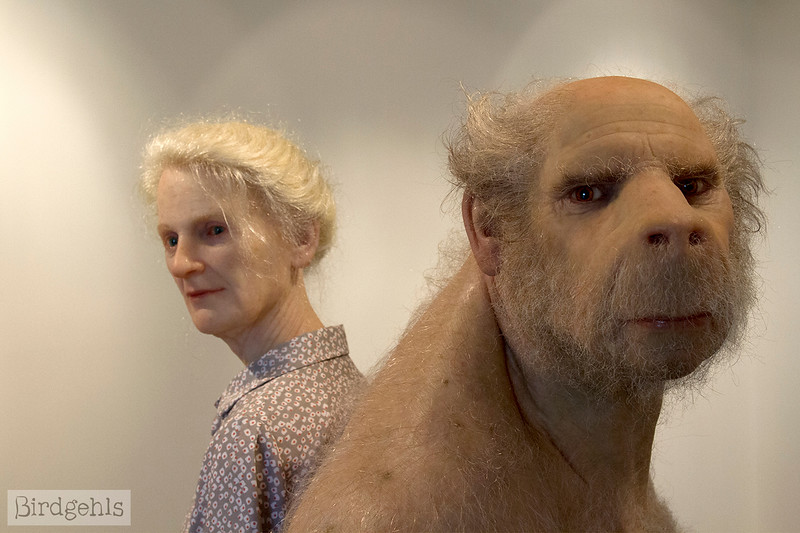 Made out of silicone, fibreglass, human hair and animal fur, it is as striking in person as it is in picture.

I’m not usually one for selfies but I highly regret not taking one with this work.

I can also imagine anyone staying at the Housemuseum would be quite alarmed to bump into ‘The Carrier’, if they were to wander to the bathroom or the kitchen for a glass of water, at night.

The Carrier 2012 isn’t the only piece by Piccinin in the gallery – there are a few spread around.

My favourite is Truck Babies, 1999. They sit happily in the living room, being cute and watching Japanese TV. 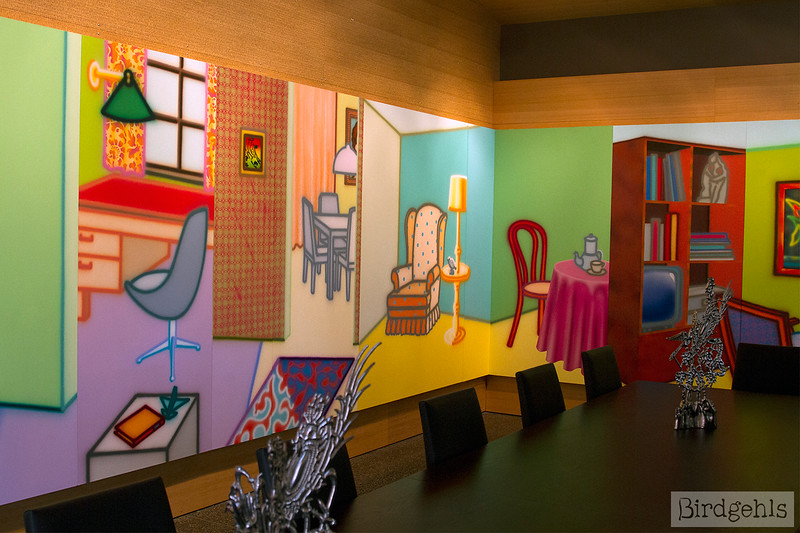 Howard Arkley at his finest, with sculptures by Caroline Rothwell.

Howard Arkley’s abstract and almost psychedelic pieces find beauty and life within the mundane, more often than not depicting suburbia and other somewhat banal seeming matter.

This mural was exhibited at the 1999 Venice Biennale and according to Lyon, there was plans to expand upon the work.

Arkley however, died of a heroin overdose after Venice, so this was never realised.

Regardless, it’s a gripping piece of work that’s found its home in the Housemuseum dining room.

Imagine having a dinner party with this art as your backdrop! It’s a talking point, at the very least.

Read more: Street Art in Perth and Some Weird Sculptures

Digging this photograph by Nils Koenning.

The Museum of the Housemuseum

Opened in 2018, this museum is a gift from the Lyons to the public, at a cost of $14.5 million. It houses local and international art, roving exhibitions and events.

The most incredible part of this newer museum, is a work you cannot see. 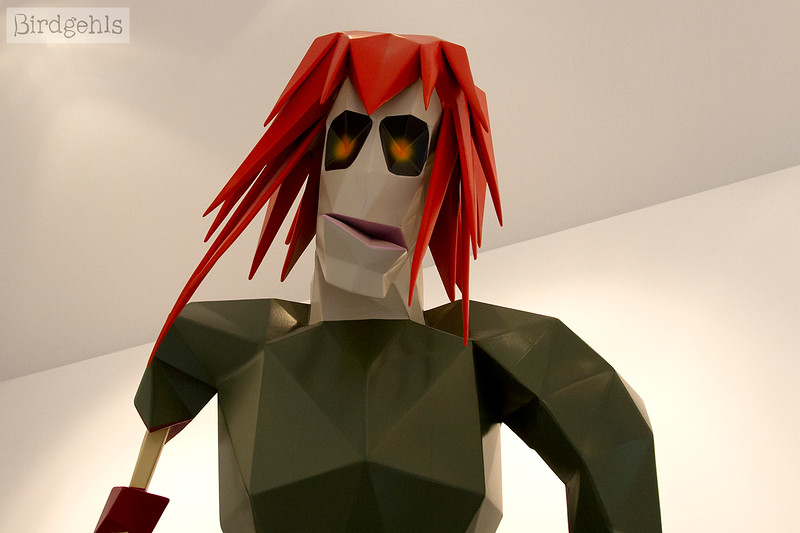 ‘Death Warmed Up, 2011’ by Christopher Langton.

And more of his sculptures – ‘Runt’ and ‘Cutie (Doggy Style)’. Dunno how to feel about the latter…

A colossal work entitled ‘VISIBLE INVISIBLE’ was painted by Melbourne artist Reko Rennie, forming the foundation of the new museum.

It covers the entire base of the new building, but was visible for only a short time, before being covered by the concrete floor.

Visitors to the museum unknowingly walk across the gigantic piece of art, oblivious to its existence!

This is what I love about art – it does not need to be seen, to be appreciated.

I haven’t and will never see this work in the flesh, but it gives me goosebumps just to know it’s there, mere inches under my feet.

Penny Byrne’s ‘Damien’s Diamante Doggie, 2008’ – the only ‘pet’ ever allowed in the house.

How can you visit the Lyon Housemuseum?

Getting a place on a tour at the Lyon Housemuseum is easy, so long as you plan in advance.

Check the Lyon Housemuseum website for dates. Tours tend to be held one single Tuesday and Sunday a month.

Upon booking, you’ll be contacted to pay the tour price as a deposit. It costs $25 for a guided tour, which takes around an hour and a half, to two hours to complete.

The Housemuseum Galleries don’t require a booking. They’re open to the public from Tuesday to Sunday, during the day.

Scale Model for Still Life, 2009 by Matthew Sleeth depicts the Melbourne Star. And yes, it’s meant to be in pieces like this.

I highly recommend doing this most unusual tour in Melbourne. It’s a great way to experience some fantastic, contemporary art in a beautiful setting.

Plus, how many people do you know who can say they’ve been to a Housemuseum?! Come join our ranks.

What I love most about the enterprise, is that it’s a family affair. Corbett and Yueji plan the exhibitions and take turns holding the public tours. Their girls help out where they can and it’s Yueji who handles all the bookings.

It truly is an honour to tour their wonderful and unique home. 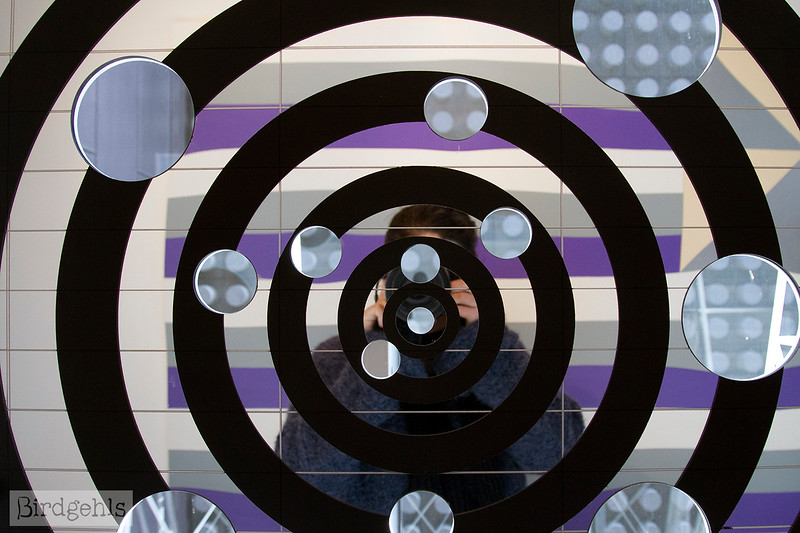 Self-portrait in front of the one Callum Morton’s works. 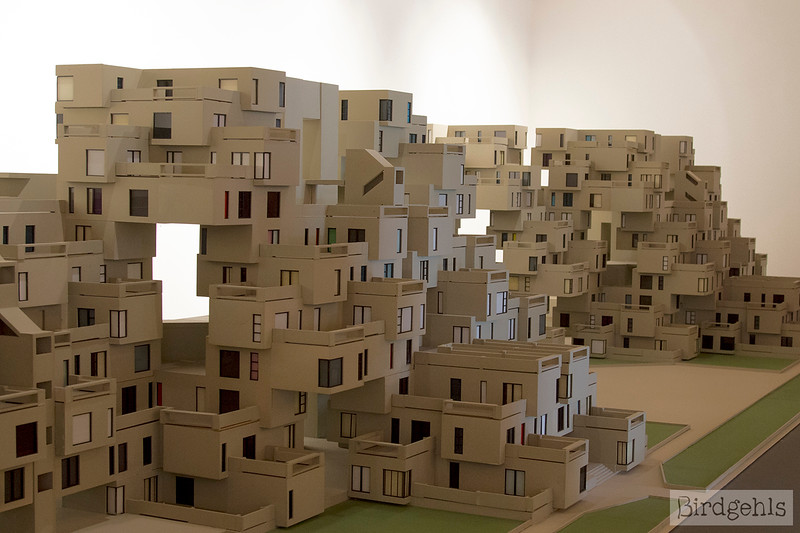 Morton’s ‘Habitat, 2003’, which has sound effects and flashing lights.

Other posts on Melbourne

The best weekend getaways from Melbourne.
How to spend a week in Melbourne.
Where to stay in Melbourne – the best neighbourhoods. Look for other accommodation options in Melbourne here.
Some quirky date ideas and unique things to do in the city.
And a light-hearted look at what happens when you move to Melbourne.

Pin this for future reference! 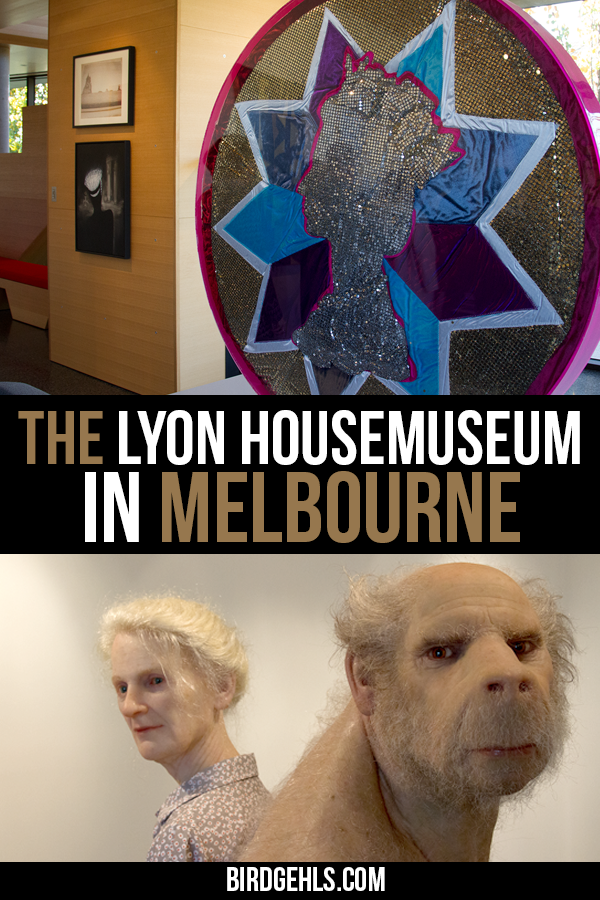 The post A Museum, or a House?! The Lyon Housemuseum in Melbourne appeared first on Birdgehls.

A Museum, or a House?! The Lyon Housemuseum in Melbourne