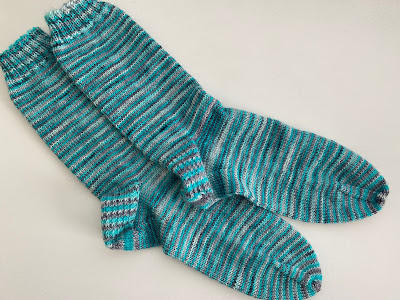 I'm not sure what happened in the last week, but I'm suddenly finding myself with tons of knitting mojo. I know that's not a bad thing, but I wish I could figure out how it happened so I could make it happen more often! This is all by way of an explanation for the project spamming I'm about to do in this post, so hold on to your hat.

First, I finished my mother's socks last Wednesday. They are currently soaking in a warm bath and will soon be set to dry on a warm radiator (it's snowing lightly right now, so the heat is kicking!), but in the meantime here is an unblocked shot:

I used my regular vanilla sock recipe for these, working over 64 stitches with size 0/2.0 needles. My mother has narrow feet, and these were just a big snug for me, so they should be perfect on her. I used almost exactly three-quarters of the skein of Emma's Yarn Practically Perfect Sock in the colorway Juneau, leaving me about 100 yards to use for a baby hat or add to a scrappy project. I've now got two more pairs of socks left to knit for holiday gifts, both man socks, so I really do need to cast on the next pair soon.

After the socks were finished, I needed to shift to a different project for meetings, so I pulled out my Hitchhiker. It has grown quite a bit; out of the original 119g, I have 64 remaining, so I am almost halfway through my yarn. The color change is much more noticeable now. 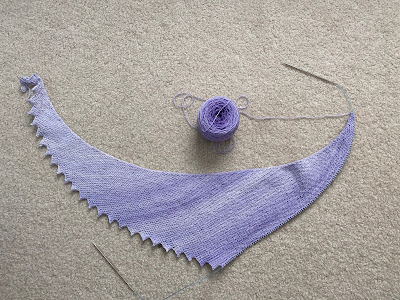 What kicked my mojo into high gear, however, was a new design sample that you saw the start of last Wednesday. Once the socks were off the needles, I turned my attention to it and it alone until it was done, and I am thrilled with how it came out. 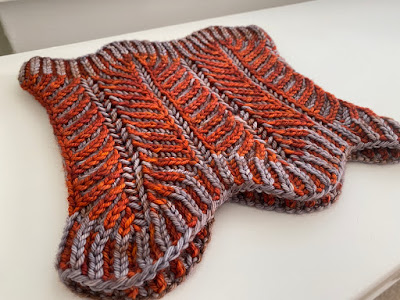 One of the hardest things about designing for me is getting the knitting to match what I see in my head, and this one actually turned out even better. I even managed to get the pattern written up and off to my tech editor over the weekend! Now I am working on a coordinating hat with the remaining yarn, and it's teaching me a lesson in humility. 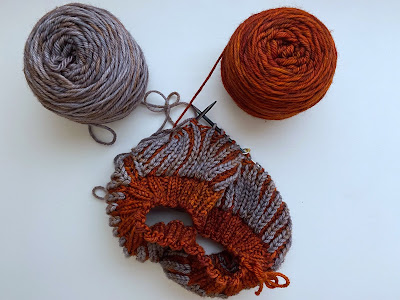 What you're seeing here is actually the third attempt at this hat. I had to rip back to the brim on the first attempt when I found I'd dropped a stitch on the very first round of brioche increases/decreases. On attempt number two, I found that I'd missed an increase and had to tink back four or five rounds. But I am on track now and am paying close attention to what I'm doing so that I don't repeat either of those mistakes. I think it was the universe's way of telling me that I should figure out my math first (I had just cast on and was designing on the needles, but I really needed to do the math to know when to start the crown decreases). Once I fixed the missed increase last night, I got out my calculator and did the necessary math to finish. With any luck, this hat will be done in the next couple of days; I have already promised the pattern to my tech editor by later in the week.

Finally, I'll end with a bit of stash enhancement: 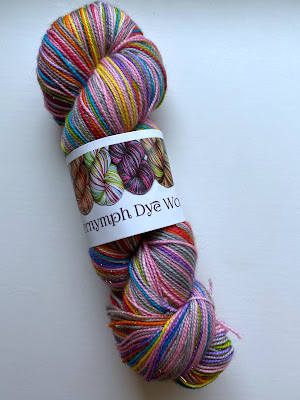 I've decided that I really need to getting more yarn out of the stash than adding it in, but this particular skein was a prize, so I'm not sure it really counts. Obviously this is from Fibernymph Dye Works, and it's Lisa's Bedazzled base (can you see the sparkle?). This is a pretty special skein. It's her Nyan Cat colorway, which she hasn't dyed in some time and doesn't plan to dye again, but she found a single skein not too long ago and I was lucky enough to win it.

I think that's enough from me for one day! I hope your knitting mojo is running high and you're staying safe!