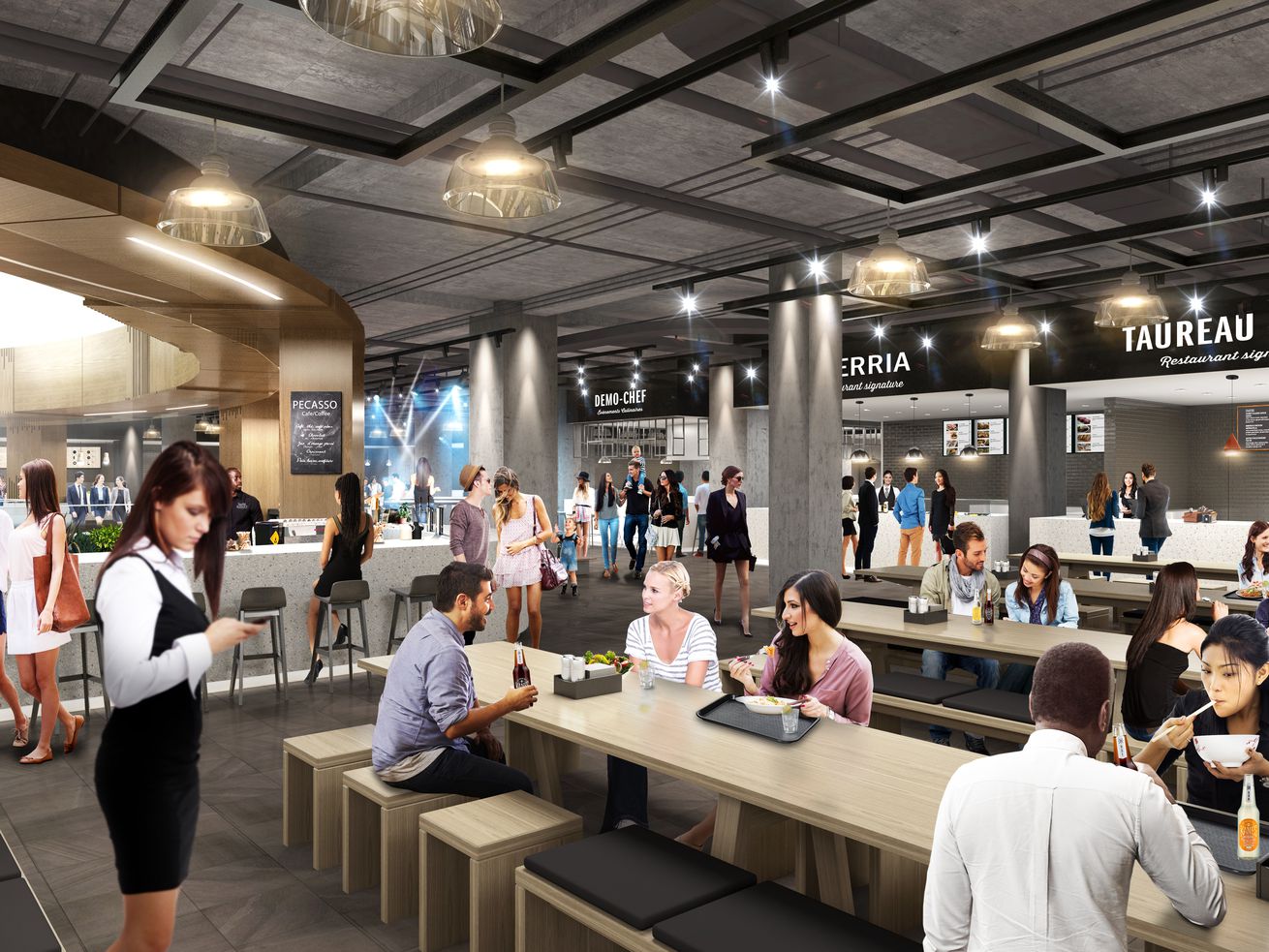 The major food hall, which is opening this year, will feature offerings from the owners of Toqué, Le Club Chasse et Pêche, Montréal Plaza, and more.

The owners of Toqué, Montréal Plaza, Le Club Chasse et Pêche, Moleskine, Romados, Hof Kelsten, and Le Red Tiger will all have a place in the market, which is set to be located inside the Eaton Centre on Ste-Catherine, and should open this fall.

Most of these restaurateurs will be offering food hall-friendly versions of their existing businesses. Romados, for example, looks to be more or less a second location for the famed Portuguese rotisserie, sticking to what it does best: chicken with piri-piri sauce, fries and pasteis de nata. Baker and owner of Hof Kelsten, Jeffrey Finkelstein, will open Hof Sucrée, with pastries and desserts (although it won’t be identical to his Mile End bakery).

Some restaurants will hone in on specific elements of their existing restaurants. Moleskine, under the direction of chef Frédéric St-Aubin, will focus fairly strictly on pizza, while Vietnamese pub Le Red Tiger will offer highlights of its menu, including banh mi, pho, and a papaya salad.

On the other hand, the owners of Toqué — Normand Laprise and Christine Lamarche — will debut something rather new. Riffing off the popularity of the burger at their more casual Brasserie T restaurant, they will open “Burger T” in the market, fittingly serving fancy burgers and fries.

Other fine dining figures will take elements of their existing restaurants and scale them to the more casual, faster setting of the food hall — Montréal Plaza owners Cheryl Johnson and Charles-Antoine Crête will bring avant-garde creations, while Le Club Chasse et Pêche will focus on Québécois seafood and meat. Le Club Chasse et Pêche owners Hubert Marsolais and Claude Pelletier will actually have double-representation in the hall — their casual pasta spot Il Miglio will also have its own counter.

Time Out Market CEO Didier Souillat tells Eater that Time Out didn’t want to impose on chefs’ offerings — beyond a few basic stipulations, the Market isn’t telling the restaurants what to serve.

“We’re democratizing fine dining — we’re not asking Charles-Antoine and Cheryl to do sandwiches and bagels. We’re asking them to do what they do in their restaurant and be able to serve it in a food hall environment,” he says.

Logistically, that means small à la carte menus with options that can be prepared faster than in a more formal setting — even though Time Out is certainly more than a cut above any existing food hall in downtown Montreal (expect china tableware, not plastic cafeteria trays), it’s still aiming to serve locals, so that means it needs to be approachable for say, office workers on an hour-long lunch break.

While Time Out has promised all along that the Market would feature stars of the local food scene, Souillat adds that the line-up of vendors was also selected to ensure diverse offerings.

The newly-announced vendors will make up about half of the market; another batch of participating restaurants should be announced after the summer. (Three bars will also be on site.)

Beyond revealing some of the Market’s line-up, Souillat also offered some insight into why Time Out opted to open in the Eaton Centre — while other Time Out markets haven’t gravitated towards malls, it was a choice that made sense in order to cater to a broad cross-section of Montrealers and visitors.

“It would be very nice to be by the old city and by the [Port] but we want to be trading 365 days a year...we need a place where people live, where people work, and where tourists go, and I think this place checks those boxes.”

Time Out is one of three major food halls in the works for Montreal this year — another, Le Cathcart, will make over the public spaces in Place Ville-Marie, just a block away. Then, Le Central (which may be the first of the bunch to open) will take up residence right alongside Place-des-Arts.

This is not Time Out’s first rodeo — the Market concept (a spinoff of the much-older Time Out magazine, prominent in cities like New York and London), was first launched in Lisbon, Portugal, several years ago. Time Out has been rapidly expanding it in the last year or so — Markets in Miami and New York recently opened, and Chicago and Boston versions are also in the works for 2019.