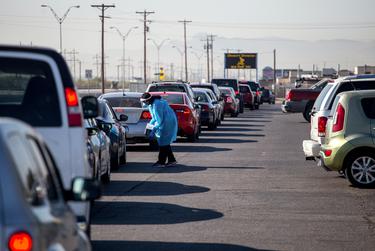 Analysis: The 2020 election’s October surprise has been with us for months

This election’s October surprise is no surprise at all.

It’s the novel coronavirus, and cases are rising as people are voting. Look no further than the nation’s 22nd-largest city — El Paso — effectively shut down because of a COVID-19 surge right in the middle of early voting. It’s not necessarily that people can’t vote — they’ve been told to go ahead, with caution — but about what’s likely to be on their minds as they fill out those ballots.

Early voting in El Paso, as in other parts of the state, has been energetic. Through Monday, 36.4% of the county’s registered voters had cast ballots in person or by mail, ahead of 2016’s 35.1% with four days of early voting left to go.

That wasn’t the only record being broken in the westernmost part of the state. Hospitalizations related to COVID-19 have jumped 300% in less than three weeks. The number of cases is surging. City officials have asked residents to bunker in for two weeks, except for essential trips. And El Paso County set a 10 p.m. to 5 a.m. curfew. That might be foreshadowing for the rest of the state; the University of Texas COVID-19 Modeling Consortium projects a rise in new cases and hospitalizations that would top the state’s summer surge by mid-November.

With a surge in El Paso and signals of higher spread in the rest of Texas, the pandemic remains a top-of-mind issue for voters at a time in the election cycle when a surprising bit of news can shake things up. October 2016’s news included video of then-candidate Donald Trump talking about grabbing women’s genitals, and the FBI reopening its investigation of whether Democratic nominee Hillary Clinton and her staff improperly used a private email server for government communications. There is often some late-breaking bit of dirt on candidates that comes out just in time for Election Day.

News like that can help undecided voters make their decisions.

Not this year. Undecided voters are harder to find. In an election that is more about who will show up to vote than about how they’ll vote, new revelations haven’t seemed to move public opinion much. In national polls, the presidential race has been remarkably static since before Joe Biden had locked up his nomination as the Democratic challenger to President Donald Trump.

And the primary subject of public conversation hasn’t changed appreciably since mid-March, when the pandemic snagged the full attention of government officials and the public. Those two things — a tiny number of undecided voters and a pandemic with a monthslong hold on everyone’s attention — are related. It’s hard to change minds if you can’t change the subject.

The pandemic hasn’t let go of that attention, pummeling the economy, leaving millions unemployed, rising through a terrible summer peak and — in many parts of the country — surging now to levels that surpass those summer levels. The president was infected and recovered. A new cluster of cases has hit Vice President Mike Pence’s staff.

Hopes that the virus would slow down, or that an effective and safe vaccine would be ready, or that it would be safe for virtually everyone to socialize and shop and go back to work and school have all fallen short.

Lots of people inside and outside of politics thought and hoped we would be talking about something else in October 2020, that the pandemic would be tamed enough to let us focus on other things as we decided how to cast our votes.

Maybe it shouldn’t be a surprise that that’s not what happened.

Disclosure: The University of Texas at Austin has been a financial supporter of The Texas Tribune, a nonprofit, nonpartisan news organization that is funded in part by donations from members, foundations and corporate sponsors. Financial supporters play no role in the Tribune's journalism. Find a complete list of them here.

Analysis: The 2020 election’s October surprise has been with us for months