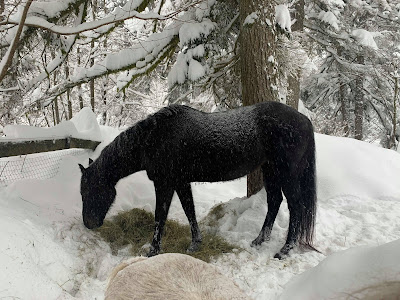 The Self-Boarder Chronicles: How to Survive Winter

While your winters may (and probably do) differ from the absolute chaos that is our little corner of the globe, I have a multitude of tips and tricks to help you survive the cold, wet, and (sometimes) downright miserable season!

These are just a few of the many Winter tips and tricks - it all is dependent on your living situation and what kind of barn set up you have, but I hope you enjoy regardless!


1. Begin Your Preparations in the Fall!

In late Autumn (end of October/ early November) I start getting things organized and putting away items I won't need for the incoming Hell Season. Things like saddle pads and leather goods get cleaned and put away in the comfort of our cramped spare room until Spring blossoms again (if I do ride during the winter, I simply bring these items from home).

I also take the time to re-organize the tack room - refolding sheets and blankets, sweeping under the grain bins, etc.

During this time I'll bring out things like the horses's winter blankets, water trough deicer, extension cords, and pack the barn aisleway with roundbales that I dole out as needed. It's much nicer having a few rounds available right then and there versus driving out to where we have them stored, especially if the roads are bad or it is snowing/raining. It also works out well to feed rounds during the Winter, as in the instance of winter storms and inaccessible roads I never have to worry about the horses not having hay. And if it's cold? No worries, the horses have hay. However, it's important you prevent hay wastage, because its a bitch to clean up in the mud and snow (see point 5).

Aside from the obvious (like a tank deicer), I have found it increasingly helpful to have separate Barn Only clothing (especially footwear). There is nothing quite like showing up at a friends house smelling like horse pee. For this reason, I alternate boots and usually keep a pair in my truck during the Winter months. I still run them under water to get the bulk of the yuckiness off, as they still reside in my truck. If you have a closed off tack room, you could easily leave a coat and boots there, but mine is open to invasive species and the barn cat enjoys spreading his scent on things that he shouldn't...

In addition to wearing a warm toque and gloves, one of the best items I have ever been gifted was a head-lamp. Trudging through the snow to the barn in the evenings has become a less precarious task with a light on my head, and it works well for doing tasks around the barn where the regular lights don't illuminate. As an added bonus, I like using it for precarious tasks like packing hooves (like abscess holes...) during the evening light where I need something that doesn't play off the shadowy light so I can see what I'm doing.

Extension cords are also severely underrated - I often move the horse's water trough around during the winter, as it is typically stationed on the west side of the barn and during the winter, the horses often only break trail to the east (where the sun shines). It's important to have cords that are long enough so I can plug in the deicer.

Once it starts to snow, the horses use less and less of their paddock area. This means that they'll be stuck to the same old 14x14 area all Winter long unless your horses are good at breaking trail and exploring around once the snow has fallen.

Once the snow starts to fall and accumulate to the point where the horses don't venture around too much I take a few flakes of hay and toss them out onto the snow to encourage the horses to break trail and pack down the snow. It works quite well, especially if you save the fancy alfalfa hay for this occasion. Its important to note that my horses won't venture out for hay if it's too far off the initial path - I only toss hay a little bit off the trail and each time progress it a bit further as we go. They do have access to 24/7 hay in their lean-to shelter, which is perfect for days when it rains or snows, as they do not have to stand in the elements to get their food.

I've also found that horses are much hardier than people think - yes they may require extra maintenance during the cold spells (depending on their age, body type, etc) and they may need additional feeds/forage, but for the most part, they don't need to be babied when it starts to snow and they often won't stand in their lean-to where it's warm and dry (because, horses).

When the snow comes, my usual manure pile (into the back gully) is inaccessible and pushing a full wheelbarrow in snow is impossible. I struggle a lot with accepting this aspect of the Winter, as I cannot stand a pasture that is overrun with manure. Unfortunately, with the snow and freezing conditions, poo-picking is a bit difficult and as such, we do the best we can until Spring comes!

This being said, every Winter I poo-pick every single day and continuously clean (especially removing waste hay) to the manure pile in the back for as long as I possibly can. Once the snow hits and hauling heavy snow-laiden manure is too tough, I start to make a manure pile that is on the opposite side of the horse's shelter. I move as much manure as I can and toss it into a big pile. Come Spring, I have a large pile that I get removed and dumped by a tractor and it works well to prevent too much manure build up.

However, with all of our ice, I do tend to leave manure on the well-trodden pathways for the horses, as I've found that by removing this manure layer, the horses slip quite a bit. So, I begrudgingly leave it and remove it closer to Spring, tossing it into the Poo Mountain for it to be removed via tractor.

(Seriously, having a neighbor with a tractor is SO useful. I used to have to do big Spring clean-ups with a wheelbarrow and it was a week long extravaganza. With the tractor, I make a few piles in the paddocks when cleaning up all the Winter manure and the tractor comes and removes it.)

A saying my Dad often says, I find myself trying to maximize my effectiveness at the barn. Because of this, I religiously check the weather forecast - if sub-zero temperatures are incoming, I know that my hoses and the well are going to have a tough time pumping water (I do drain excess water out from the hoses, but they still freeze a bit and sometimes the well is frozen with how cold it can get) due to freezing, so I make sure the water trough is topped up before the cold weather hits. The same goes for hay - if I notice the horses are running low on hay, I make sure to refill their net to the brim BEFORE the cold weather hits so I don't have to spend time mucking with hay and string and twine and freeze my butt off.

This also goes for blanketing - I didn't blanket the horses much this year aside from a cold snap, but I pulled everything I needed out two days in advance and had them ready to go when the cold weather hit.

Again, the same goes for incoming snow. If I see it's snowing and it isn't supposed to stop, I don't go out and toss hay for them to break trail (the hay will get buried and get left untouched). Or if we are supposed to get a large dump of snow, I'll head out to check the horses earlier than usual, ensure everything is topped up and then avoid the highways when the bad weather hits.

I'll pull extra bales down from the hay loft during weekends, when I have more time, or on evenings after work if I know I'm running low and have time to do so.

I also clean as I go - the barn doesn't get neglected because it's winter. Hay bits in the hay stall are still swept into a pile and baling twine is placed in the trash. It's easier to clean up as you go instead of trying to clean up a big mess come Spring.


This all being said, Winter is a very trying time. Things get frozen, covered in snow, and horses go a little feral. But with a bit of preparation and time management planning, barn time can be less frustrating and chores can be made easier (especially if the remainder of your clean up rolls over into Spring like mine does).

What is your best winter survival type where you live? What gear can you not live without?

The Self-Boarder Chronicles: How to Survive Winter