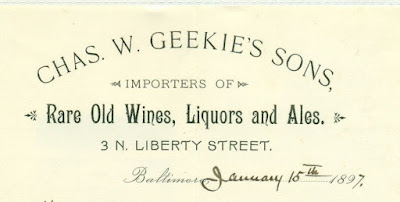 “Often times the weary traveler desired a somewhat stronger potion than mineral water, he could stop in the establishment of Charles W. Geekie’s at Number 123 Baltimore Commons (street) and purchase a decanter of “Lady’s Blush” to satisfy his thirst.”  — From a historical guidebook to Baltimore. 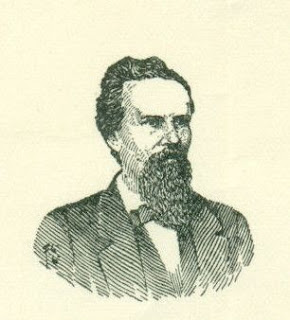 The Geekie family harbored an inventive streak and Charles’ claim to fame lay in a cocktail he contrived in his saloon and billiards parlor.  He dubbed it “Lady’s Blush.”  It was an alcoholic drink whose main ingredient was creme de noyaux, which, translated from the French, means “cream of pits.”

The liqueur is well named.  Although almond flavored, creme de noyaux is made from the kernels within the pits of apricots, peaches and sometimes cherries.  Those kernels also contain elements of hydrocyanic acid, better known as cyanide, a deadly poison.  Although cyanide was not present in dangerous amounts in Geekie’s “Lady’s Blush,” if bottles of creme de noyaux are left for years in a cellar all the cyanide can float to the top with fatal results for the first imbiber.  Nonetheless, some have attributed medicinal benefits to the liqueur. 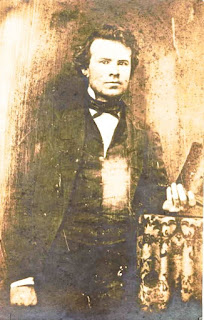 The assumption is that Geekie was well aware of the dangers and benefits.  Born in Scotland in 1819,  at the age of 18 Charles emigrated with his father from his homeland to the United States, settling initially in northern New York.  Shown here as a youth, Geekie early demonstrated a wanderlust, recorded as working in hotels in New York, St. Louis, New Orleans, and Chicago over the next 22 years.
At the age of 40 in April 1859 the peripatetic Scotman was wed in Philadelphia to 19-year-old Mary Pauline Shaw, a Pennsylvania native.  His marriage and the birth of a daughter not long after seems to have curbed his travels. The couple would go on to have 12 children over the next 26 years. Geekie settled his family in Baltimore about 1860.  He had saved enough money to open a liquor business at 123 W. Baltimore Street, the avenue shown above.  Says the Baltimore guidebook:  “During the 1860’s, Master Geekie operated his billiard saloon and sold liquors wholesale and retail where travelers to our fair city could seek both recreation in a game or two of billiards along with a drink to calm their trembling nerves.” 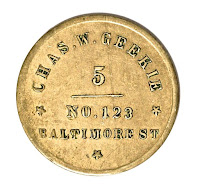 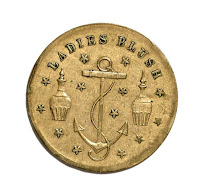 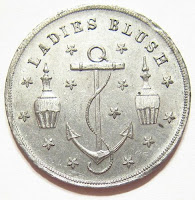 That drink might have been a “Lady’s Blush” since Geekie provided multiple incentives, issuing tokens in both brass, above, and a zinc amalgam known as “German silver” that provided five cents toward purchase of the libation.  For favored customers he also provided an official looking paper token good for a 25 cents toward a Lady’s Blush or “fruit cobbler” or rum cooler.  Mixed drinks were Charles’ speciality.

Still exhibiting his restlessness, after 16 years promoting Lady’s Blush and about the time of the birth of his seventh child, Geekie quit his liquor business, pulled up stakes and moved his family to Kent County on Maryland’s Eastern Shore.  There he took up raising livestock.  He and Mary may have decided that the fresh breezes and open spaces of farm life was more salubrious for his children than the city air of Baltimore.  Two more children were born there.
The record is scanty about Geekie’s experience with livestock.  He is listed as having bought a prize cow named Rosa Shepherd from W. Shirley but nothing further.  Nor was this agricultural stint to take his attention very long.  Within six years Geekie had returned to Baltimore and the whiskey trade, opening a new saloon and liquor house.  For two years he did business at 6 South Charles St. and then apparently needing more space in 1884 moved to 3 North Liberty.  Meanwhile he was grooming two sons, Frederick (“Fred”), and Charles W. Geekie in the whiskey trade.

In April 1892, Mary Geekie, age 52, died, her youngest child still only six years old.  Although her husband continued to run his business, he too died in October of the same year, age 72.  Fred and Charles Jr. continued to run the saloon and liquor sales, changing the company name to Charles Geekie’s Sons, as shown above on a letterhead. 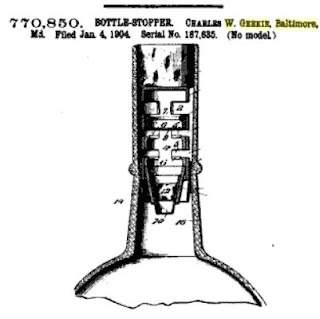 In the meantime, Charles Jr., was carrying on the family tradition of invention.  Just as his father had given the world the Lady’s Blush cocktail, this Geekie owned patents for mechanical devices he had invented.  Perhaps the most interesting was a contrivance for sealing a bottle to prevent its contents being tapped by an interloper.  It was just the thing in which a saloonkeeper like Geekie might have had a personal interest.  Shown here, his stopper seems unduly complicated, involving a perforated tube, a second tube as a valve cage, a third tube as a valve, and a cork at the mouth.  While the Geekies might have employed the device in their Baltimore establishment, there is no indication of commercial production.
In 1914, Fred died, leaving Charles Jr. to run the Geekie enterprises.  As the coming of National Prohibition became more and more evident, the son shut down the business for good.  With the demise of the firm came the end of the elder Geekie’s celebrated libation.  The cocktail recipe seems to have disappeared along with Charles W. Geekie Sons company.  Today, as shown above, Bols still makes the deep red “creme de noyeux,”  but it gives no instructions on how to make “Lady’s Blush.”