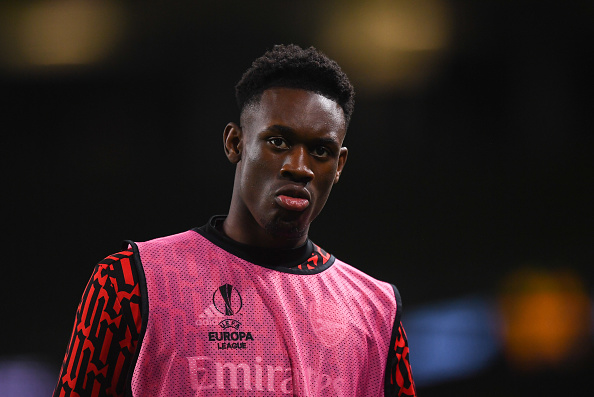 Former Arsenal academy striker Benik Afobe believes it is the ‘right decision’ for Folarin Balogun to leave the Emirates amid his ongoing contract standoff.

Balogun, 19, has less than six months remaining on his current deal and is yet to reach an agreement with the Gunners to commit his future to the club.

The New York-born striker’s excellent form for the Arsenal Under-23s this season hasn’t translated into regular first-team action under Mikel Arteta, despite also impressing in several cameo appearances in the Europa League.

Balogun has registered two goals and an assist in just 61 minutes of game time in Europe but is yet to make his Premier League debut for the club.

And Afobe, who failed to break into Arsenal’s first team after shining throughout at youth level, in a similar fashion to Balogun, urged the forward to move on as he doesn’t see a pathway for him at the Emirates.

‘It all depends on your positioning and who’s ahead of you… Balogun, he’s good, I’ve seen him play,’ Afobe told The Beautiful Game Podcast.

‘I think it’s the right decision for him to leave.

‘The captain [Pierre-Emerick Aubameyang] is a number nine, the other number nine is top goalscorer this season, Lacazette, and Eddie Nketiah is a couple of years older than him and has also done well.

‘If you want to keep waiting for your chance, before you know it you’re 23, and teams, managers will start picking up players who are more experienced in the Championship, who have 100 appearances to their name, instead of the guy from Arsenal who has played for England Under-19’s.

‘And that’s kind of what’s happened to me as well.’

Despite being linked with a move to several top European clubs including RB Leipzig, Arteta is ‘positive’ that Balogun will pen a new deal at Arsenal.

‘As far as I know from last week, the player wants to be here, so I’m positive. I think he’s made some big progress in a few months.’

For more stories like this, check our sport page