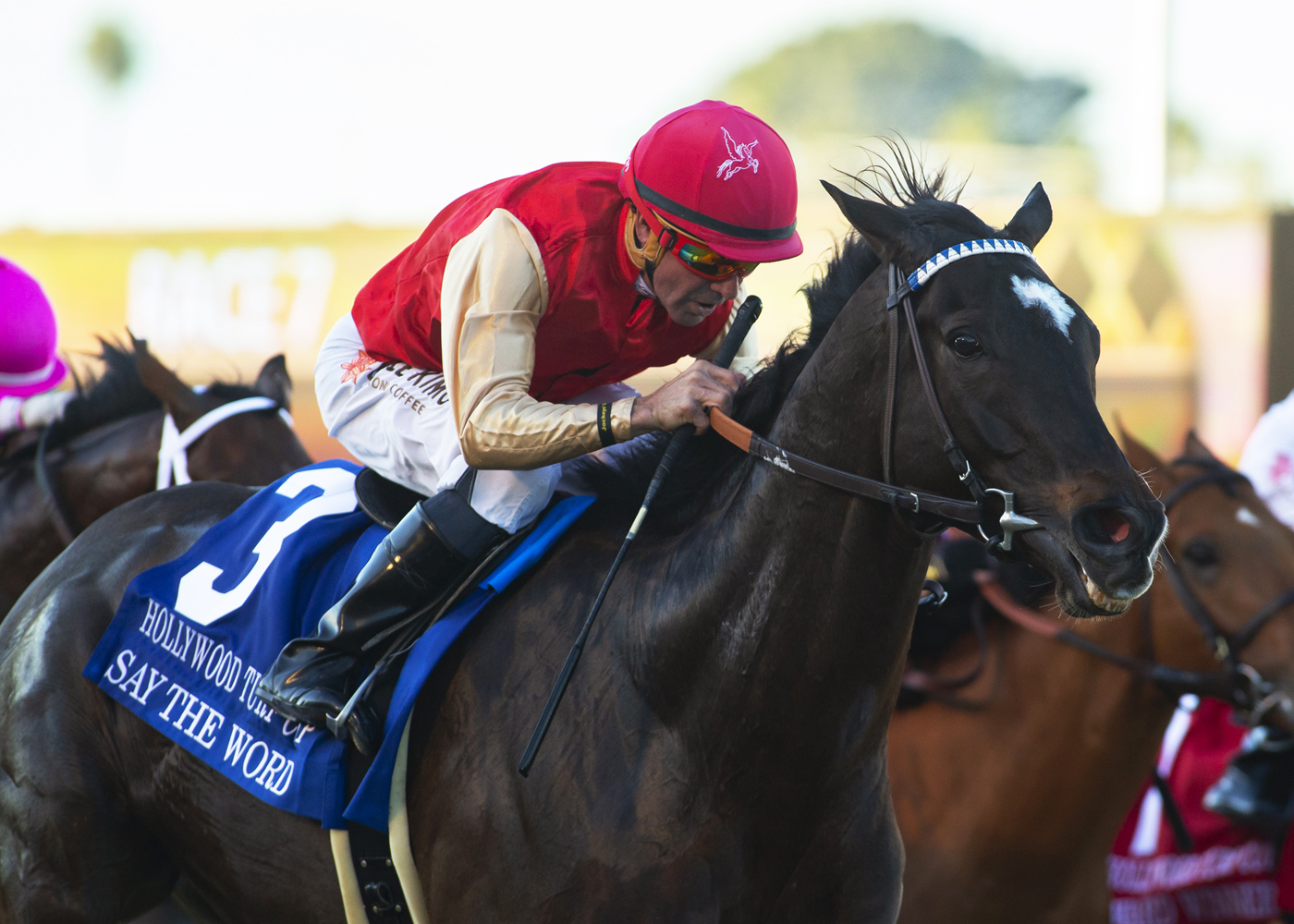 While Acclimate played a game of catch me if you can, his stablemate, Say the Word, accepted the challenge and ran away with the $250,000 Grade II Hollywood Turf Cup on Friday at Del Mar.

Trainer Philip D’Amato’s two entries finished 1-2 in the 1½-mile grass marathon, part of Del Mar’s Turf Festival during its Bing Crosby fall meet that concludes on Sunday with the $400,000 Grade I Matriarch Stakes for fillies and mares.

Acclimate, a 7-year-old gelded son of Acclamation, set the pace with fractions of 23.98, 49.00 and 1:13.65 and almost pulled off a 9-1 upset before Say the Word, last at the top of the stretch in the seven-horse field, came charging home in the middle of the track under Kent Desormeaux to win by a length in the final time of 2:27.62.

Say the Word, a 6-year-old More Than Ready gelding who went postward as the 5-1 third choice in the wagering, won for the seventh time in 33 starts to pad his career bankroll to $822,792 with the winner’s check of $150,000. All but six of his races have come over the turf.

“This horse has had so much trouble before this,” D’Amato said of the winner. “It was great to see him win. Kent did like he said he would and kept him covered up, then got him clear in the stretch and let him stretch his legs.”

It was an impressive day for the 45-year-old D’Amato, who also won the opener on the nine-race card with Red Storm Risen and the nightcap with Badger Kitten to take over the battle for leading trainer of the meet with 11 victories, three more than Bob Baffert.

The Hollywood Turf Cup victory was a first for D’Amato and his second stakes victory of the meet. He’s won 34 stakes races overall at Del Mar.

For Desormeaux, who has enjoyed a productive summer and fall at Del Mar, it was also his second stakes victory of the meet and first in the Turf Cup. He’s won 86 stakes races at the seaside track, the ninth-most all-time.

“I’ve got to give Phil the credit for this one,” he said. “He told me it was hard to get this horse to settle, so I told him I’d do the European thing: I’d put him up some horse’s rear (forcing him to stay in position) and wait until the end.”

That horse was Friar’s Road, who finished third, a neck behind Acclimate, with Umberto Rispoli aboard.

“My peers always ask me who’s my star, and what that means is I’ll put a star by the horse that I think will carry me 70 yards from the wire,” Desormeaux said. “And Umby (Rispoli) had the star today.”