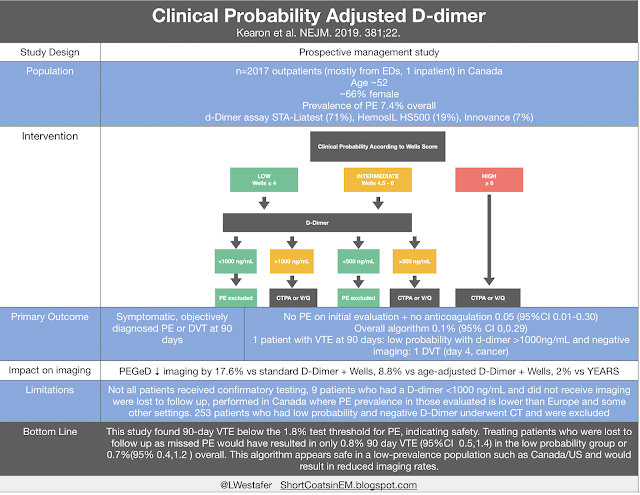 The Gist: Kearon and colleagues found that the PEGeD strategy, which employs an elevated D-dimer threshold of 1000 ng/mL in patients with a Wells score of ≤4, resulted in less imaging than the standard approaching using Wells, age-adjusted D-Dimer with Wells, or the YEARS algorithm while  “missing” ≤2% of venous thromboembolic events (VTE) at 90 days [1]. This multi-center study indicates that this approach is likely safe in low-prevalence settings such as the US and Canada and could dramatically reduce the burden of imaging.

The background: Risk stratification is the first step in the evaluation of pulmonary embolism (PE) and this can be assessed using gestalt or a risk stratification tool such as the Pulmonary Embolism Rule Out Criteria (PERC), Wells Score, Revised Geneva Score, or the YEARS algorithm. In conjunction with the age-adjusted d-dimer, these are recommended in guidelines to reduce imaging in patients with suspected PE [2-4]. While provider gestalt yields similar estimates of the probability of PE, risk stratification tools have demonstrated benefit in improving imaging yield (and reducing unnecessary imaging) [5].

The problem: Unfortunately, the lack of specificity of the D-Dimer renders many patients who are low or intermediate risk requiring imaging. Literature has increasingly supported elevated D-Dimer thresholds in certain patients (such as those > 50 years old) and in pregnant patients [2-4, 6, 7]. However, studies have recently examined, with success, risk adjusting the D-dimer to use higher thresholds in low probability patients [8-10].

This study is an evaluation of a modified Wells + D-Dimer pathway, allowing for patients with a Wells score of ≤4 to have a D-dimer threshold of 1000 ng/mL. 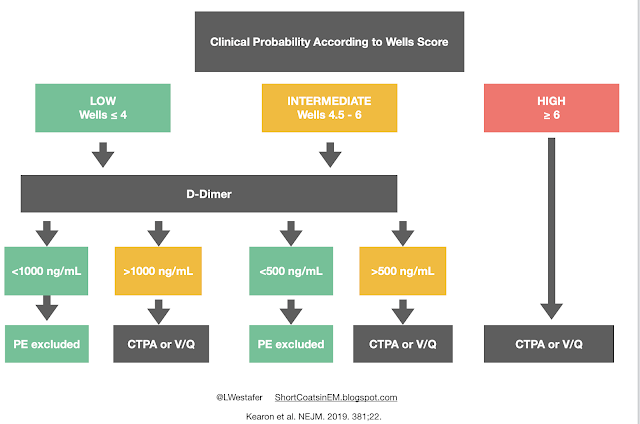 The study basics are depicted below.