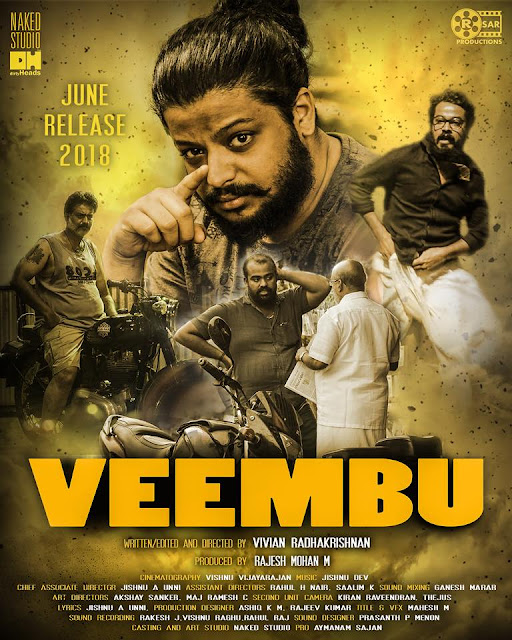 It is tough for an independent film without familiar faces to get public attention – even less so when it is not in theatres or on a prestigious streaming platform. Yet debutant director Vivian Radhakrishnan’s Veembu, now available on Youtube, has generated a fair amount of conversation this season. One reason is that actor Joju George unveiled the poster online. Another is that director Midhun Manuel Thomas promoted it on his Facebook page when it was released earlier this month.
Since these artistes are known for devotion to their craft, it is natural for expectations to be built solely on the strength of their support for Veembu. Thomas is just fresh from the stupendous critical success of the crime thriller Anjaam Pathiraa, so his patronage, if it can be called that, is particularly significant here because Veembu too is a thriller.
Now for the bad news. If Messrs George and Thomas meant to be kind, their kindness was misplaced – because Veembu does not deserve them.
At a basic level, the film’s concept is thought-provoking and seems exciting. Veembu means to offer an insight into how the truth is manipulated in the media to suit the powerful while maligning the weak. The journey from premise with promise to full-fledged film is rocky though. Veembu is pretentious, trying really hard to be cool and gives the appearance of being convinced that it has achieved that goal.
Veembu’s protagonists Kinavu and Abukutty are friends in remote rural Kerala. Kinavu is an autorickshaw driver taking care of his old mother who has been diagnosed with dementia. One day, desperate for a large sum of money, he agrees to commit a serious crime. Circumstances go out of his control largely as a result of his own inability to stay focused.
Veembu’s primary problem is that it is more preoccupied with form and structure than content. It starts with a man of small build being tortured by what appears to be a criminal gang. The fellow appeared in a selfie with someone he claims not to know. His captors think he is lying. One of them orders him to describe the circumstances that brought him to this pass as if he is narrating the script of a film. He agrees. That’s how it comes about that we get to hear the story of Kinavu and Abukutty.
The narrative device serves little purpose, the storytelling is over-stretched and the characterisation inconsistent. A man is rough with his elderly parent half way through the film but seems utterly devoted to her before and after that. Time is wasted on extraneous developments, such as Abukutty trying to have a fling with a married woman, that contribute nothing to the character development or the denouement. And by the time that neat twist comes around, involving two intruders and a heavy object, I was struggling to keep my eyes open and care for the people on screen.
DoP Vishnu Vijayarajan does deliver some eerie frames, well complemented by ominous background music. Particularly impressive is the shooting of a man held captive through Veembu. After a while though, these feel like embellishments masking weak writing. No amount of overhead shots of men weeping in a forest as seen through falling raindrops can camouflage the fact that the men are written as outlines without the colours filled in.
In its tone and tenor, from the beginning Veembu feels like a wannabe Angamaly Diaries, but again, no amount of stylisation, lookalikes in the cast and derivative music can give you the panache and heft of Lijo Jose Pellissery’s lovely 2017 film. After watching Veembu, I learnt from Google that Vivian Radhakrishnan assisted Pellissery on Jallikattu and has earned some praise for a recent making-of-Jallikattu video. Clearly, admiration for the boss does not necessarily translate into great art.
From among an inconsistent cast, several actors in Veembustand out as naturals. Sujin Murali as Kinavu and Shanavas Sharaf as Abukutty are both easy before the camera, and will hopefully get better films in future. Sharaf reminded me of Tito Wilson, Angamaly Diaries’ U-Clamp Rajan, both in terms of looks and conviction. Another charismatic presence is Rajeev D.H. playing a man imprisoned for no fault of his – he is attractive and though his role is largely silent, manages to convey anguish with his intensity.
According to Radhakrishnan who wrote, directed and edited Veembu, the film has been in the cans for two years mostly due to censor troubles. If you can bear the tedium of its 2 hours and 20 minutes, in the end you will discover its troubling politics. Through a raucous monologue in the climax, in the guise of criticising the media – a worthy objective, no doubt – Veembu takes potshots at those who highlighted the communal angle in the rape of a Bakarwal child in Kathua in 2018 and other liberal causes.
In a better-made film, that finale – confused or intentionally illiberal? – would have merited a critique. Veembu is so vacuous and boring, it is not even worthy of anger.
Rating (out of 5 stars): 0.5
This review has also been published on Firstpost:
https://www.firstpost.com/entertainment/veembu-movie-review-wannabe-angamaly-diaries-with-a-nice-concept-but-lacking-depth-coolth-and-the-smarts-8278571.html
Poster courtesy: https://www.facebook.com/veembu/
Source: annavetticadgoes2themovies