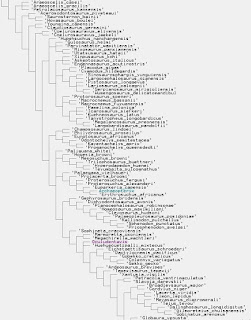 What is Oculudentavis if it's not a theropod?

In my last post, I argued the recently described Oculudentavis (Xing et al., 2020) is not a theropod.  So what is it?  To answer that question, I entered it into Simoes et al.'s (2018) sauropsid analysis which emphasizes basal lepidosauromorphs and comes out with basal gekkos and nested iguanians even using just morphological characters.  To test Jingmai's avialan hypothesis, I also added Archaeopteryx to the matrix.  The result is 384 MPTs of 2337 steps each.

As you can see, Oculudentavis resolves as a stem-squamate in a trichotomy with Huehuecuetzpalli and squamates, while Archaeopteryx is an archosauromorph sister to Erythrosuchus.  And this matrix didn't score for scleral ossicle shape, posttemporal fenestra size or maxillary tooth row length.  After scoring Oculudentavis, its teeth are clearly not acrodont, it seems to have a ventral parietal fossa and  lacks an ossified laterosphenoid.  The authors could have made it easier to evaluate by separating the cranial elements in the 3D pdf file.  As it is, a lot of palatal and braincase info is uncertain.  But Huehuecuetzpalli is Albian compared to Oculudentavis' Cenomanian, and has a skull length of 32 mm (19 mm in the juvenile) versus 14 mm in Oculudentavis.

What is Oculudentavis if it's not a theropod?