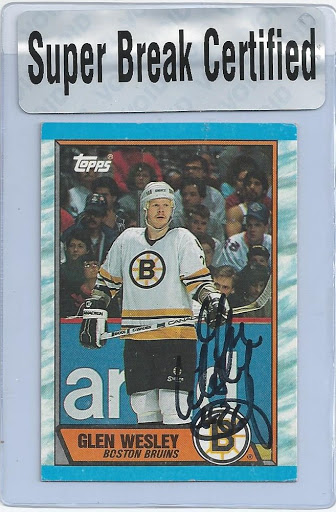 As I alluded to earlier this week, I've got an autograph to feature that was sent to me by my buddy Marc B.  Check it out! 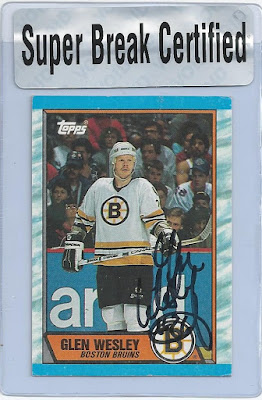 Aw, yeah!  Another card down in my lifelong quest to accumulate 1989-90 Topps and O-Pee-Chee autographs.

I've talked about it ad nauseam here on the blog, but I have more fond childhood memories tied to this set than any other.  These were the first cards my brothers and I collected as kids, and my Dad would bring packs home from work for us every week.  We'd spend hours sitting at the kitchen table trading doubles and rearranging the cards in our 3-ring binders.  Those were great days that I'll remember for as long as I live. 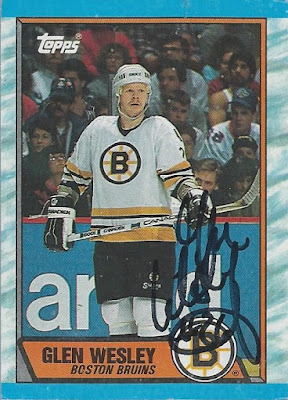 Glen Wesley specifically is an awesome autograph to get, as I certainly recall the rough, hulking defenseman being viewed with disdain in our household of Whalers fans.  Ironically, he would be traded to Hartford during their final few seasons and went on to enjoy quite a bit of success with the team in Carolina.  In fact, he excelled with the Hurricanes, winning a Stanley Cup and becoming the only player to play in each of the franchise's first ten seasons after the move south.  His number is retired by the team even. 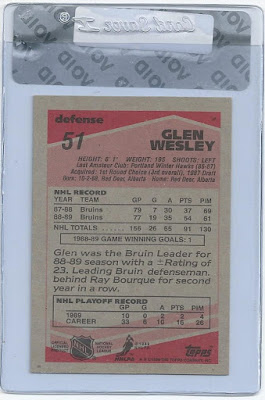 This was a perfect inclusion by Marc in his latest trade package.  So much of a hit, in fact, that I already had an autographed copy of the O-Pee-Chee version of this card: 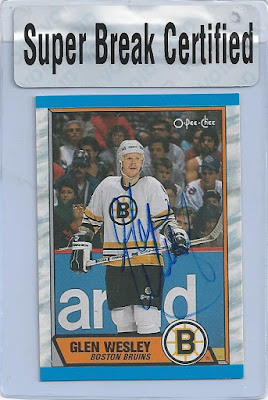 ...and here's the Topps version from Marc, signed in black.

This is definitely the first card where I've ended up with signed copies of both the Topps and O-Pee-Chee versions so far.  Awesome stuff, and the cherry on top of what was a fantastic package of cards overall.  Thanks again Marc!
Source: shoeboxlegends