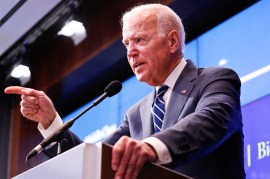 If Biden wins, he’ll have to put the world back together

If Joe Biden wins the election in November, he will likely be sworn in — perhaps virtually — under the most challenging circumstances since Harry Truman became president in 1945. The country will probably be in the end stages of a brutal pandemic and faced with the worst economy since the Great Depression. The Treasury will be significantly depleted. Millions of people will have lost loved ones, their jobs, much of their net worth. Hopefully a vaccine or an effective treatment will be closer to reality, and our national attention can shift to what comes next.

We judge our great presidents by how they managed harrowing trials and wars: Abraham Lincoln and the Civil War; Franklin D. Roosevelt and the Depression, followed by World War II; Ronald Reagan and the Cold War. But many of the bigger and less historically rewarding challenges are what come immediately after — how to rebuild and remake the country and engage in the wider world. Think about Ulysses S. Grant and Reconstruction, Woodrow Wilson and the League of Nations, Truman and the architecture to wage the Cold War, George H. W. Bush and the collapse of the Soviet Union. Some failed; others succeeded. All faced enormous obstacles explaining what just happened, what had changed, and how we must adapt. This is the category of presidency that Biden, or Donald Trump if he is reelected, will find himself in.

If Trump wins, the country can expect more of what we have seen in the initial phase of dealing with COVID-19 — shifting the economic and health burden to the states and Congress, a lack of interest in international cooperation, and a refusal to critically scrutinize the response.

But what about Biden? The beginning of his presidency will have a unique logic and character that sets it apart from the early stages of the crisis. His first year will be shaped in various measures by the public reaction to the horrors of 2020, the national Rorschach test of seeing Trump’s silhouette finally from a remove, and a dawning reality of exceedingly difficult choices across the board.

Biden’s first and toughest challenge will be to address the badly frayed governance compact, in which citizens expect and trust the government to deliver on essential services. For decades, Republicans and Democrats have believed that the government needs fixing, albeit for very different reasons. Republicans tend to view much of the state apparatus, including regulatory bodies and social services, as inherently inefficient and run by entrenched, unaccountable bureaucrats. Democrats see our federal workforce as under-resourced and frequently subjected to quixotic and unreasonable demands from political leaders. However, many Americans, particularly those with means, have been shielded from the consequences of a broken government. The economy has generally been good, and the wealthy purchase better education and health care from the private sector.

COVID-19 lays bare the weaknesses of the American system for all to see. It shows that the crisis of governance is much worse than either party believed. And, no one can fully escape the cost. The twist of the knife is that some other democracies performed much better than the United States. Taiwan, South Korea, New Zealand, and Germany were able to test quickly and en masse, and seem poised to convert that into a program of broad public-health surveillance that allows a more targeted approach, which in turn facilitates less draconian economic measures. Or consider the stimulus. Like the United States, the Canadian government also cut its citizens a check. But unlike America, the Canadian checks were directly and automatically deposited into their accounts days later. In America, receiving aid can take months, and only after people navigate an abundance of red tape.

Keeping America safe is supposed to be one of the core competencies of the federal government, whether you are a Republican or a Democrat. Many people feel that is no longer the case. A Biden administration will have to design careful, constructive steps to rebuild public trust even as the reaction to the pandemic will likely continue to cleave blue and red. Urban dwellers, who have so far been the hardest hit by the virus, will be more open to the role of government in trying to patch social services and rebuild pandemic preparedness. Rural residents might be more focused on the economy and less on government safety nets.

Biden’s second herculean task will be resurrecting the national economy. By January 2021, the United States will likely have tried numerous unprecedented fiscal and Fed efforts to keep the faint pulse of the national economy going, but unemployment will still be in the double digits and entire industries will remain decimated. With the end finally in sight, the government will need to urgently figure out how to get as many businesses as possible up and running and people back to work. This effort would be challenging in the best of times, but the pandemic likely will have changed the very nature of work in America. A simple restart is not possible. The rise of telework, the demise of retail, the uncertainties of the gig economy, more automated manufacturing, and even the role of restaurants in this new environment will take time to sort out.

The pandemic is also a vivid reminder that millions of Americans lack basic protections that are taken for granted in other democracies, such as unemployment benefits, sick leave, and health insurance. After the crisis hit, Republicans in Congress worked with the Democratic House to enact many reforms to temporarily fill these gaps for people. Republicans’ ideological flexibility in the age of Trump no doubt helped with their rapid weaving of a safety net, but with Biden at the helm, they will undoubtedly return to their concern about the deficit and spending. The next president must strive to consecrate, continue, and improve this renewal of the social contract, taking lessons not from Western Europe, but from Asia — Taiwan, Singapore, and South Korea — where the most efficient public sectors exist. Biden will also have to urgently repair and improve the Affordable Care Act, which Republicans have tried to dismantle over the past few years.

The third challenge is international. The Trump administration has failed to lead and organize the world in responding to COVID-19. Trump, at times, alienated allies when he enacted uncoordinated travel bans and competed with them for scarce medical resources. This behavior has undoubtedly made the crisis worse, but cooperation will be much more important at the end of the pandemic than it was at the beginning. Right now, all governments are rightly preoccupied with their national crises. But in 2021, a number of crucial problems must be addressed collectively. How can the vaccine be distributed globally, at a reasonable cost, and to those who need it most? How can governments work together to put in place an international architecture of surveillance, rapid response, and a scalable industrial base for crucial medical supplies so everyone is prepared for the next pandemic? As governments rebuild their national economies and focus on restoring their domestic industries, how do they do so in a way that also creates a healthy global economy that works to everyone’s benefit? And, as the world opens back up, how can countries deal with the geopolitical crises that will inevitably emerge from this period?

The Biden administration will need to not only convene the international community but, like Roosevelt, Truman, and Bush, provide a vision for the path forward. This will require equal measures of leadership, humility, flexibility, and determination. Unlike the post–World War II era, when Europe was rubble, Asia chaos, and the American homeland untouched and economy ready to roar, the global recovery is this time likely to be led by Asia, with China ascendant and ambitious. The world will be more multipolar but decidedly Asian-themed.

This leads to the most vexing post-coronavirus challenge: how to manage the China dimension. China’s failure to be honest about COVID-19 increased the risks to the rest of the world, its pressure on the World Health Organization compromised a vital international institution when people needed it most, and its propaganda war to place the blame on the United States amounted to the throwing of a gauntlet in a superpower competition. These outrages are layered upon a mounting strategic rivalry over values and interests that infuses the geopolitics of Asia but is also taking on global dimensions. For instance, China is vigorously pursuing its territorial claims in the South China Sea; using its substantive economic might to coerce countries on a wide range of issues, including the status of Taiwan and human rights; and pushing its Belt and Road Initiative in a way that ignores decades of best practice from the World Bank and other institutions. The task confronting the next administration will be without precedent in our history. The U.S. has had outright enemies before, and also countries with whom it is deeply engaged and intertwined. But these have always been decidedly separate groups.

Trump looks set to oscillate between pressuring China on trade and using hyperbolic rhetoric to blame the country for the virus, and praising Xi Jinping personally and abdicating any leadership role in the competition over values. Biden’s challenge will be to fashion a relationship that does not descend into all-out strategic competition. He will need to marshal a global coalition that presents China with both opportunities and constraints, and will need to provide a compelling vision for how to cooperate on shared problems, like pandemic preparation and climate change. At the same time, the coalition will need to shift necessary military capabilities to the Pacific and redirect national capacities long focused on the Middle East to Asia. The U.S. has gotten a late start and taken several detours on the way to an Asia-centric strategy, but that starts with a vengeance now.

For Biden, his post-pandemic agenda cannot be an exercise in restoration. It will have to be a master class in redesign, a national effort made more difficult by empty coffers, a frayed social safety net, an uncertain economic environment, a people venturing outside for the first time in many months, and a daunting challenger rising across the Pacific.

If Biden wins, he’ll have to put the world back together