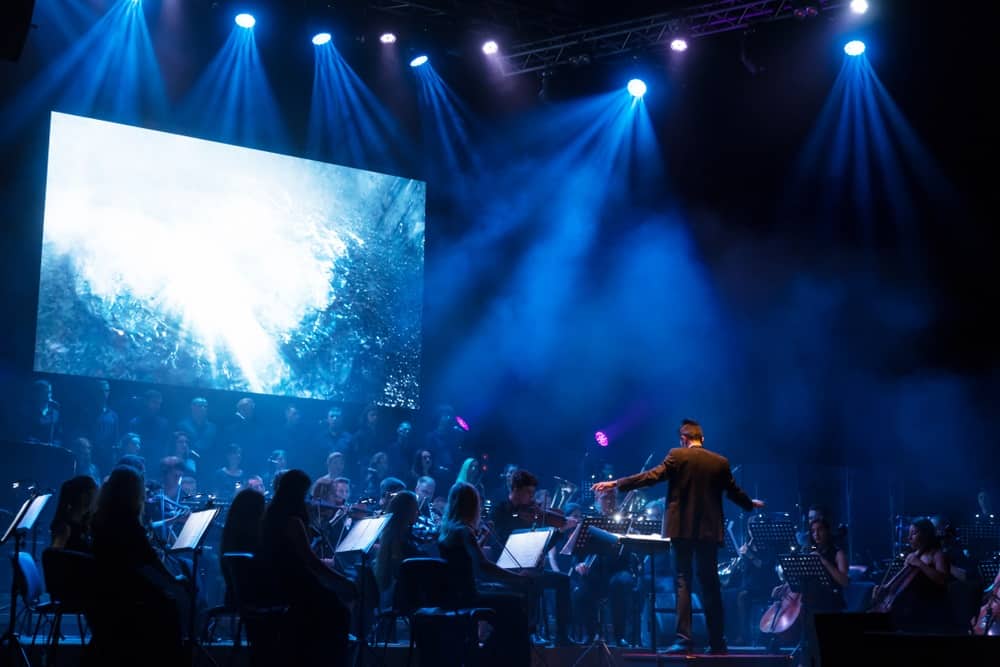 What are the Different Types of Orchestras?

When you consider the evolution of the orchestra over its approximately five-hundred-year history, it is not surprising that many different types of the orchestra are common today. In this article, I am going to take a whistle-stop tour of the many and diverse kinds of the orchestra that are in the concert halls and performance platforms of today and delve briefly into their origins.

In a form that we would recognize in the 21st Century, the orchestra as its come to be known in Western Classical music began in the Baroque Era. This early orchestra would have been common to the courts of the nobility across Europe during the flamboyant and decorative Baroque period of music. In terms of instrumental forces, it was quite modest when compared to a symphony orchestra of today.

The total number of players in a typical Baroque orchestra would have numbered around twenty to thirty. Instruments would have varied according to the availability of players and the composer’s intentions. A small string section with violins, violas, and cellos would have been supported by a harpsichord, flutes, recorders and oboes and bassoons, with the occasional French horns and trumpets. The percussion was mostly timpani-like drums or other skin percussions that were used to bring rhythmic emphasis to the piece.

Through the Classical period, the orchestra expanded to include clarinets and a larger string section. Brass instruments became a permanent feature of this orchestra as did bassoons and oboes. As we move into the Romantic period, the orchestra grows significantly into the kind of orchestra we would recognize today. As the end of the 19th Century arrived the orchestral forces were swelled towards a hundred or more players.

Mahler’s ‘Symphony of a Thousand’ (No. 8 in Eb Major), is a fine example of this instrumental excess.

By this time the first violin section alone could reach some thirty players. We find there are extra instruments added to the symphony orchestra including the bass clarinet, the contra-bassoon, bass trombones, and tubas. Another addition was the harp and the saxophone that joined the woodwind section. Add into the mixture an ever-increasingly exotic range of percussion instruments and you have the full power of the modern-day symphony orchestra.

From the grand proportions of the contemporary symphony orchestra comes the Chamber Orchestra. This group more closely resembles the Baroque in terms of numbers of players. The string sections are paired down and the woodwind usually numbers a single or pair of players only. Brass instruments comprise commonly of two French horns with the option of a trumpet. Harps and keyboard instruments are sometimes added for coloristic purposes and percussion is a far more modest selection of instruments.

A popular orchestra in the USA and to a certain extent in the UK now is the Wind Orchestra or Wind Band. As the name suggests, this ensemble of musicians contains only instruments that make their sound by blowing. This means the Wind Orchestra contains, piccolos, flutes, clarinets, bass clarinets, oboes, bassoons, trumpets, horns, euphoniums, trombones, tubas and quite frequently a range of percussion including timpani. To an extent, the Wind Orchestra is a near cousin to the traditional marching bands you might hear from the armed forces and much of their repertoire was initially drawn from similar sources. These days there is an extensive range of compositions written specifically for this powerful instrumental group.

Throughout musical history, there have been many noteworthy compositions for the String orchestra. Elgar’s ‘Serenade of Strings’ and Tchaikovsky’s stunning composition with the same title draw on the almost limitless expressive potential of this kind of orchestra.

There are no brass, woodwind or percussion instruments in a String Orchestra although pianos, celestas, and harps have been included by some composers. This orchestra has been favored by quite a large number of film and TV composers because if its intimate sound and possibilities for generous, arching melodic phrases. It is certainly reasonable to think of the origins of this orchestra as having its roots back in the works of Mozart and his own Serenades for Strings. More contemporary composers like Vaughn-Williams, Tippet, and Britten have all composed for String Orchestra.

The word orchestra can also be applied to ensembles that are not based in Western Culture. On the islands of Java and Bali, an orchestra called a ‘Gamelan’ is the orchestra of choice to the indigenous population. The instruments that make up the Gamelan are mostly percussive and include a broad variety of different sized gongs, the bonang (xylophone), and metallophones.

These instruments are like a vibraphone but with an entirely different tuning system and are played uniquely. Players strike the metal bars with mallets, then stop the sound by pinching the metal bar with the fingers of the hand not holding the mallet. The sound of a Gamelan is something that once heard is never forgotten. It’s resonances, color and compelling rhythmic layers make this orchestra one of the most amazing you are likely to hear.

For some, the following ensemble may not be included in the category of the orchestra, but to my mind, it is a perfectly valid title. The Jazz Orchestra is a large group of performers that meet to specialize in the playing of that most infectious genre of music. As you might anticipate, the Jazz Orchestra includes saxophones, (altos, tenors and a baritone), plus four to five trumpets and a similar number of trombones. A drum kit plus vibraphone, marimba and Congo drums are commonplace together with either an upright string bass or electric bass guitar.

Piano or occasionally organs also are a key instrument that forms the Jazz Orchestra. There might be an additional string section that usually consists of 8-12 violins. Some Jazz Orchestras also include a semi-electric guitar that contributes significantly to the rhythm section of the orchestra. One of the finest examples of a Jazz Orchestra is the National Youth Jazz Orchestra whose performances of an extensive repertoire of compositions are well worth exploring.

The post What are the Different Types of Orchestras? appeared first on CMUSE.

What are the Different Types of Orchestras?