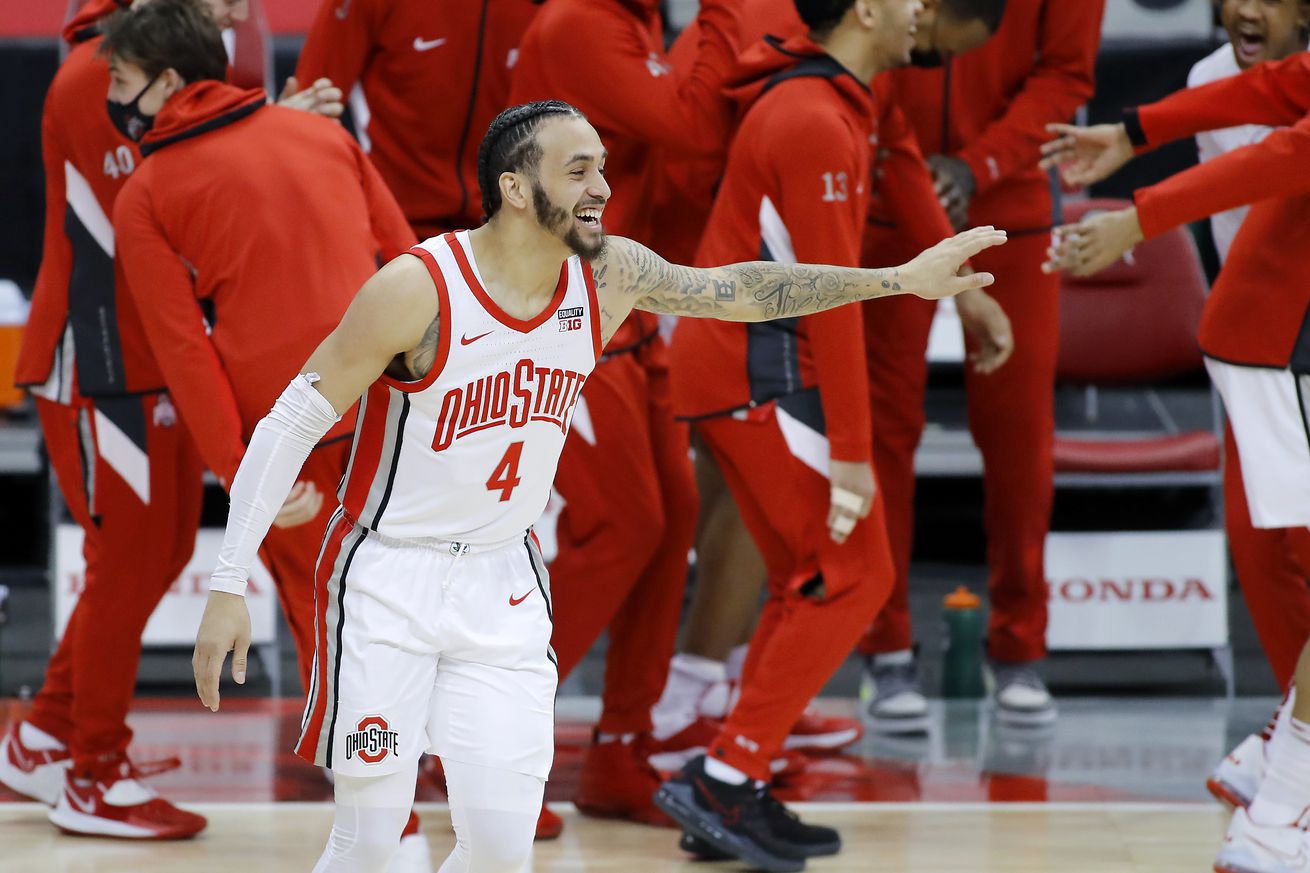 The Buckeyes join Illinois, Oklahoma, and Texas Tech in reaching new heights as the regular season starts to kick into high gear.

While this unprecedented 2020-21 season has been full of twists and turns and scheduling news, the song remains very much the same at the top of today’s bracket projection. Gonzaga, Baylor, paused Michigan, and Villanova remain anchored to the No. 1 seed line, meaning the first sign of change from Friday’s projection doesn’t appear until the two line. That’s where Ohio State, 14-4 following Sunday’s 79-62 win over a bad Michigan State team, now sits, joining Big Ten rival Iowa, Houston, and Texas. The Cougars, 15-1 and steamrolling through an overwhelmed American Athletic Conference, now rank as the top No. 2 seed, the fifth-ranked team in the field.

One week ago, Alabama held that spot, but the Crimson Tide are now on seed line No. 3, along with Missouri, Wisconsin, and Florida State, following Saturday’s loss at Oklahoma. While Alabama remains perfect in the SEC, it now has a 5-4 record in non-conference games, with the best of those victories coming against Providence in the Maui Invitational fifth-place game.

Then there are the Seminoles, who look to be stuck on the three line for the immediate future.

FSU’s game Saturday at Pitt and its game Feb. 9 at Virginia Tech are also being postponed.

On Monday night, Oklahoma was unable to extend its winning streak to six games, but last week’s impressive victories over Texas and Alabama were enough to get the Sooners into the top 16. They join Illinois, victorious over Iowa on Friday, Creighton, and Tennessee in rounding out the group of protected seeds, with Virginia dropping out following Saturday’s loss to Virginia Tech and West Virginia doing the same after losing at home to Florida in their SEC/Big 12 matchup.

Texas Tech, meanwhile, is knocking on the door as a new five seed, alongside the Cavaliers, Hokies, and Purdue, who was dominant against Minnesota on Saturday.

Turning our attention to the bubble ...

Rutgers is among the hottest teams in the country—Sunday’s win at Northwestern was the Scarlet Knights’ third in a row—and that run has given Steve Pikiell’s team some breathing room, as they’re now an eight seed here. The Scarlet Knights’ in-state rivals, Seton Hall, are not so lucky, as the Pirates fell out of the field following Saturday’s home loss to Villanova. The Pirates have dropped three in a row and now sit at 9-8, and just on the wrong side of the cut line.

While the Big East is down to four teams in this projection, we have a two-bid Missouri Valley for the first time. Loyola Chicago enters the field as the last team in today, largely on the strength of a 15-3 record and some impressive computer numbers. The Ramblers are currently 13th in KenPom, thanks in no small part to a fifth-ranked defense that suffocated Missouri State on Sunday and Monday, and 14th in the NET, two spots lower than undefeated Drake. Set reminders for February 13th and 14th, when the Valley’s two best teams meet in Des Moines for the pair’s lone regular-season meetings.

Stanford, who split their Arizona swing, Colorado State, who did the same against Boise State at home, and Richmond, who defeated Loyola in Indianapolis earlier this season, join the Ramblers in the First Four slots.

After today’s bracket and rundown, I’ll once again preview the midweek TV schedule.

Games are presented in relative order of importance. All times are Eastern. All times and broadcast information is CoVID-dependent. I’ll try to keep this section updated, but if I don’t, check out MattSarzSports.com’s weekly and daily schedules for the latest information.

Perhaps the biggest game of the midweek schedule is set for Austin, where Shaka Smart will be back on the sideline just in time for Baylor to visit. On Saturday, the Bears looked like their dominant selves in handling Auburn in their SEC/Big 12 Challenge matchup, while the Longhorns got an unexpected day off, thanks to CoVID issues at Kentucky.

Elsewhere, Purdue is rising up the bracket, and tonight the Boilermakers have the opportunity to knock Maryland under .500 and further down the pecking order. Clemson hosts UNC aiming to find some consistency, while the Tar Heels must not get caught looking ahead to Saturday’s showdown with eternal rival Duke. In the other Big Ten contest in this window, Iowa hosts struggling Michigan State needing to get past Friday’s loss at Illinois. Tennessee and West Virginia hit the road for winnable contests, while Kansas can’t afford a home loss to K-State at this point. In the MAC, Toledo visits Akron with first place on the line.

The Big Ten also features heavily in an intriguing late evening window, as Illinois faces a tricky road contest and Indiana, while Wisconsin hosts Penn State in a rapid rematch of Saturday’s Nittany Lion home win. In the SEC, Kentucky’s game at Missouri was postponed, while Miss. State heads to Arkansas aiming to give their at-large hopes some life.

Stanford hosts USC in a rescheduled game, which should be to the Cardinal’s advantage, as this one is scheduled for Maples Pavilion, not Santa Cruz. Meanwhile, both BYU and Dayton will look to avoid tripping up on the road themselves.

LSU visits Alabama with both coming off disappointing performances in the Big 12/SEC series over the weekend. The Tigers could really help their cause by handing the Crimson Tide a first conference loss. Pitt and Providence and Syracuse will aim to grab key home wins, while Florida cannot slip up after grabbing a huge win at West Virginia. Xavier, Houston, Saint Louis, and St. Bonaventure all visit beatable foes, while Memphis and VCU will be on upset alert. Note that Tuesday’s originally scheduled Kentucky-Missouri game is tentatively listed for this window, with the Tigers hoping for a less nerve-wracking game than Saturday’s victory over visiting TCU.

Quietly, St. John’s has climbed its way into consideration, but grabbing a home win over Villanova would do the Red Storm wonders. Oklahoma State, winners over Arkansas on Saturday, visits TCU, who gave their SEC Challenge contest at Missouri away to the Tigers. Creighton hosts a Georgetown team that stunned Providence on Saturday, while Virginia travels to NC State with both coming off weekend losses. San Diego State takes on struggling New Mexico in the Lobos’ temporary West Texas digs, while SMU heads to Tulsa with both teams in dire need of a win for their respective hopes.

With both Ohio State and Iowa on the two line at the moment, their showdown at Carver-Hawkeye is the game of the night. Out West, Utah hosts Arizona aiming to build off a Saturday win over Colorado, while BYU visits Portland, looking to grab a second Quad 4 win in three days.

The final midweek window is a bit of a grab bag. For starters, Minnesota travels to Rutgers with the Scarlet Knights riding a three-game winning streak and the Golden Gophers winless away from home. Stanford travels to Cal a little more than 48 hours after hosting USC, while Colorado hosts an Arizona State squad that took the Cardinal down on Saturday. Gonzaga and Belmont aim to keep their perfect conference records intact. On the bubble, Colorado State and Utah State both hit the road for a pair of series openers in Mountain West play, while Oregon ends its CoVID pause to host Washington State.

Since we are now two days into February, I would normally transition Friday’s post from a bracket to a bid watch. However, I’m going to hold off on that for a couple of weeks, until the Selection Committee’s bracket preview show on February 13th. That way I can gain more insight into what they’re valuing this season before drawing too many conclusions on the lock and bubble picture. So, expect a typical bracket update for this Friday and the next.