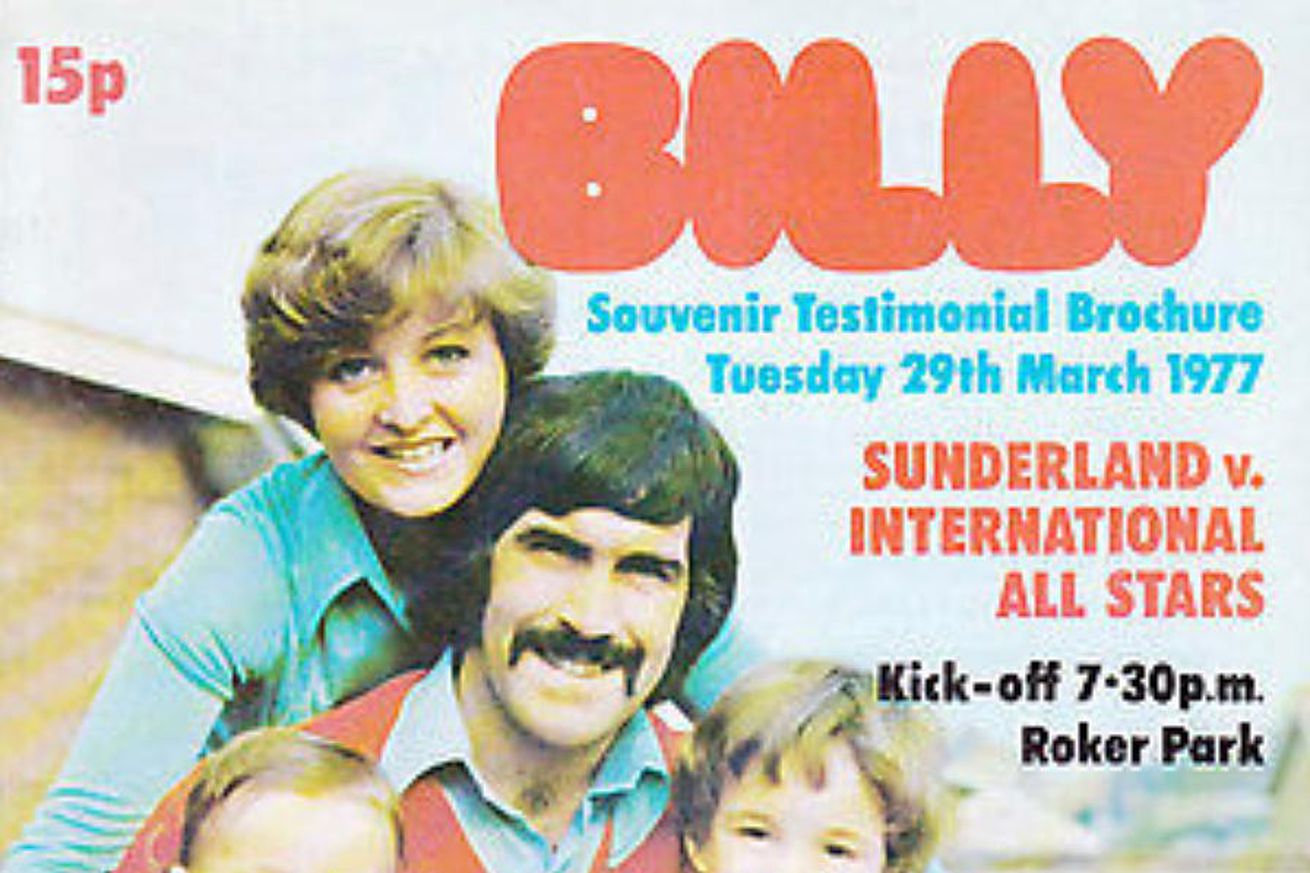 FA Cup Winner Billy Hughes said goodbye to fans after 10 years at the club as a star-studded International XI hammered Sunderland in a benefit match.

44 years ago today, Roker Park bid farewell to one of the club’s greatest ever players, Billy Hughes. The man whose corner Ian Porterfield had converted to win the FA Cup for Sunderland, was granted a testimonial match before his departure at the end of the 1976-77 season.

Hughes was a naturally talented, pacy winger, whose goalscoring and creativity had been instrumental to Bob Stokoe’s cup run four years earlier. He first arrived at Sunderland after being scouted in Scottish schoolboy football, rejecting the option of joining Celtic in favour of a career in the top English leagues and was loaned out to Vancouver Royal Canadians as a 19 year old, playing 7 times in North America. During his decade on Wearside we he would play four seasons in the top flight, three as a youngster in the late ‘60s before guiding the club out of Division 2 in 1975-76.

The Billy Hughes International XI specially assembled for this game included the star names of Bobby Charlton, Francis Lee, Graeme Souness and Malcom MacDonald, but also included a smattering of current and former Sunderland players, including Colin Waldron, Mick Docherty and Doug Collins, with Alan Brown as substitute. Also playing for Hughes’ XI was his brother John, who had played for Celtic and made one appearance for the Lads back in 1973.

This season, Sunderland struggled to adapt to life back in Division 1 and, when Stokoe resigned in the autumn of the previous year, Hughes’ form had taken a dip and he was dropped from the side by new manager Jimmy Adamson in the new year. Interviewed in The Newcastle Journal in the run up to the match, Hughes was philosophical about his exclusion from the first team:

I went out of the side originally because I just wasn’t playing well. Then the youngsters who came in did tremendously well and they have stayed in on merit. That’s how it had to be. These things happen in cycles and I have enough belief in myself to know that I will get back in. Football is all about the ups and downs. Largely its is all a matter of confidence.

When Bobby Kerr had his testimonial a year before Sunderland were riding high at the top of Division 2, and the crowds had come out in their droves to give him a generous little nest-egg in honour of his services to the club. But with the team languishing at the bottom end of league and having suffered a 4-1 defeat at Aston Villa a few days earlier, only 6,424 braved the elements for Billy’s big night under the floodlights.

The game itself was completely dominated by former Newcastle man MacDonald, who bagged four goals. Hughes started for Sunderland and was the first to score with a header on 19 minutes, before two in three minutes from “Super-Mac” put the invitation side 2-1 up at half time. Yet it was the 39-year-old World Cup winner, however, who impressed The Journal’s John Donoghue most of all:

Some of the finest touches of the night...came from the oldest man on the park. With legs that would not betray him, Bobby Charlton would, as his touch and all round vision showed, still be playing today.

Porterfield then popped up to level the scores, but MacDonald, Collins and then MacDonald again took the game away from Sunderland to make the score 2-5 going into the final stages. Hughes’ FA Cup winning skipper, Bobby Kerr, would add one more consolation goal before the goal of the night from the International XI’s substitute and Newcastle favourite Tommy Craig, who crashed the ball in from outside of the penalty area to round off the scoring. The night belonged to the all-stars.

Adamson’s Sunderland ultimately failed to survive the drop and were relegated at the end of the season. Hughes never did regain his place in the side, the last of his 335 competitive appearance for Sunderland coming in the FA Cup draw against Wrexham on 8th January 1977.

He went on to have a short spell at Derby County before moving on to Leicester City, where he played a couple of seasons before a short loan to Carlisle brought his English league career to a close. He won one international cap for Scotland in a one-all draw against Sweden in 1975.

Billy played one final game, at San Jose Earthquakes in the American Soccer League, and then retired to run a pub in Derbyshire. He sadly passed away in Derby aged 70 in December 2019, and is remembered fondly as a brilliant talent over his ten year career at the club. His name will live on forever as one of those few men who’ve won the Cup with Sunderland, but this cold March night wasn’t quite the warm of send-off that he might have hoped for.