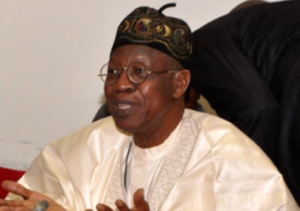 Why Nigeria’s rating by Transparency International is low ― FG

The Federal Government has said that Nigeria’s low rating by the transparency International (TI) corruption perception index was a result of the country’s opaqueness in doing business.

The Minister of Information and Culture, Alhaji Lai Mohammed, stated this while fielding questions from State House correspondents at the end of the Federal Executive Council, FEC, meeting presided over by President Muhammadu Buhari at the Council Chamber, presidential villa Abuja.

But he noted that the present administration has initiated reforms to make it easier and more transparent to do business, especially in the port sector.

He said the issue of TI low corruption perception of the country was not necessarily about stealing of public funds, even as he contended that the group’s rating of Nigerian has not correctly reflected the government’s effort to curb corruption in the country.

Alhaji Mohammed said that the inconsistencies in scoring by TI over the years could be due to inadequate data, saying that the government is taking necessary measures to communicate relevant data on all sectors.

He, however, said that by the time the reform put in place by the government begin to yield result, the country’s corruption perception will improve.

The post Why Nigeria’s rating by Transparency International is low ― FG appeared first on Vanguard News.

Why Nigeria’s rating by Transparency International is low ― FG