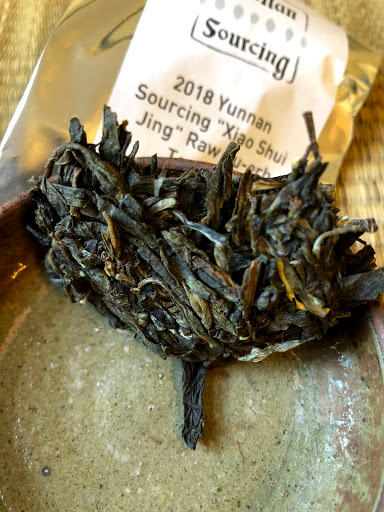 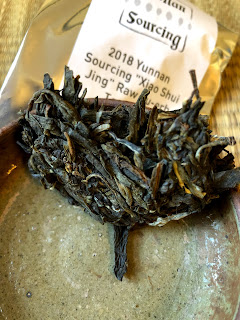 I ordered this in a large sample order last month.  It was one of two 2018 Yunnan Sourcing Brand Spring Jinggu area productions.  First let’s sample this 2019 Yunnan Sourcing Xiao Shui Jing which goes for $78.00 for400g cake or $0.20/g.
Dry leaves are very spicy and pungent with rainforest and sweet notes underlying.
First infusion starts creamy, smooth, vegetal, woody, and spicy.  The spicy flavours slowly emerge in the aftertaste where bready sweet notes reside and expand in the mouth.  There are mild tropical nuances on the breath… this will be an interesting session…
The second infusion has a sweet orchid taste to it initially then a chicken broth taste to it then there are dry woods, sweet breads, lots of mushroom notes and a faint fruity lingering sweetness in the aftertaste like melons.  The mouthfeeling is slight mildly velvety and sticky.  There is a lingering very mild cool pungent in the throat.
The third infusion has a thick feeling of mushroom and dry woods there is some bread sweetness, chicken broth, even floral taste.  The taste here is unique and with a lot going on.  The qi starts to come in and make the head heavy.  The mouthfeeling is chalky and slight sticky on the tongue.
The fourth starts with a thick broth of mushroom sweetness that pops into a very sweet fruit taste then moderate cool pungency then a nice creamy sweet finish.  There is some vegetal and woods that faintly lye in the mid profile.  The Qi has a stuffy feeling in the head.
The fifth infusion starts off with a mild quick bitterness, then a sweetness, mushrooms, creamy sweetnesses in the aftertaste.  There is lots of interesting and unique taste in here. Over a velvety, almost chalky mouthfeeling and vacuous opening throatfeeling that seems to carry a bit of pungent cool.
The sixth infusion starts moderately bitter then moves to a bright fruit and creamy sweetness then there is faint wood and vegetal then a moderate lingering pungency then long sweet taste. The thickness of the liquor in moderate thick and the mouthfeeling is a bit chalky.  The qi lingers in the head and mind.
The seventh infusion starts off with a moderate bitterness with fruit trailing behind.  The bitter and fruit pair walk together for a while before a mild pungent wave crests bringing a returning sweetness of wood, creamy fruit, and even a touch a faint pepper.  The mouthfeel is moderate and chalky.
The eighth infusion starts with a moderate bitterness paired with distinct fruity sweetness.  This infusion gets a touch sour and astringent in the finish which stimulates the mouth and throat.  There is a creamy sweetness and fruitiness and the bitter lingers throughout a bit more here.  There is a sweet creaminess that lingers on the breath.
The ninth infusion starts with a bitter sour note with distinct fruit and mushroom thickness undernieth.  The tastes are really bold and distinct here with the help of a moderate bitter and even sour nuance.  It gives the thicker broth of mushroom and pear fruit space to expand. 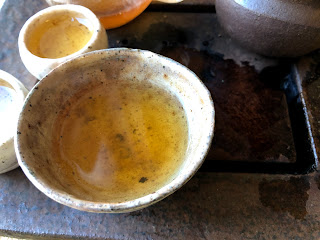 The tenth infusion has a juicy fruity onset now with woods and even fruity florals the bitterness is more in the background and a distinctly fruity note is throughout.  A bit of floral enters the picture here.  The mouthfeel is a slippery and a bit chalky feel to it.  The fruity sweetness is found even minutes later.  The Qi is pretty mild in this puerh mainly a slow to build in the head type of thing.
The 11th infusion has a nice orange, pear, and floral sweetness.  The fruitiness is robust and the mouthfeel is a sandy chalky type of thing.  The throatfeeling is empty but opening in the upper throat.  A cooling pungent lingers in the upper throat.  The Qi is relaxing.
The 12th infusion is a bitter bitter and sour but less now and mainly a long fruity pear tastes dominate.  The mouthfeel is really full, sticky, and chalky.  The qi is mild, and makes me feel content.
The 13th starts with a banana tropical fruit nuance and some faint wood.  There is a mild bitter and sandy mouthfeeling here.  The 14th is more tropical fruit again its sunny and enjoyable, if not a bit simple in taste, feel, and qi.
I steep this a few more times thinking that it is fading away but am proven wrong.  This puerh continues to hold on to juicy fruity tastes in a reasonably thick liquor in these late infusions.  I increase the steep times as the bitterness and astringency drops off and can really push the fruitiness out of these leaves quite nicely. 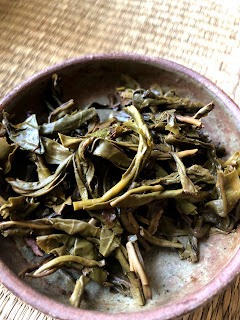 I eventually put this one into an overnight infusion and tons of fruity juicy and viscus taste is pushed out the next day so I put it into another overnight infusion… great stamina for these juicy fruity tastes for sure…
Overall, this puerh has enough going on as a single estate puerh to not make it boring, this is an above average Jinggu in taste, but on the other hand is not overly engaging especially in the Qi deparment either.  However, the Qi had a happy simple feeling to it.  Its mouthfeeling is enough and the taste profile and thickness of the liquor in the first handful of infusions is kind of interesting.  In the mid-session the flavor profile turns sweeter and less mushroom, foresty, spicy, chicken broth.  There is enough change throughout the session to make it an enjoyable Jinggu area puerh for the price.  The stamina and fact you can steep it longer than your average sheng is a big plus.  I think the biggest issue is I had this a day after the 2018 Yunnan Sourcing Long Tang Gu Shu…
They are both Jinggu area and both similar price but that is all the similarities they seem to have with the 2018 Yunnan Sourcing Long Tang Gu Shu winning in all areas.  The one thing that this 2018 Xiao Shui Jing has over the Long Tang Gu Shu is its unique profile in the first handful of infusions which I really enjoyed.
Peace