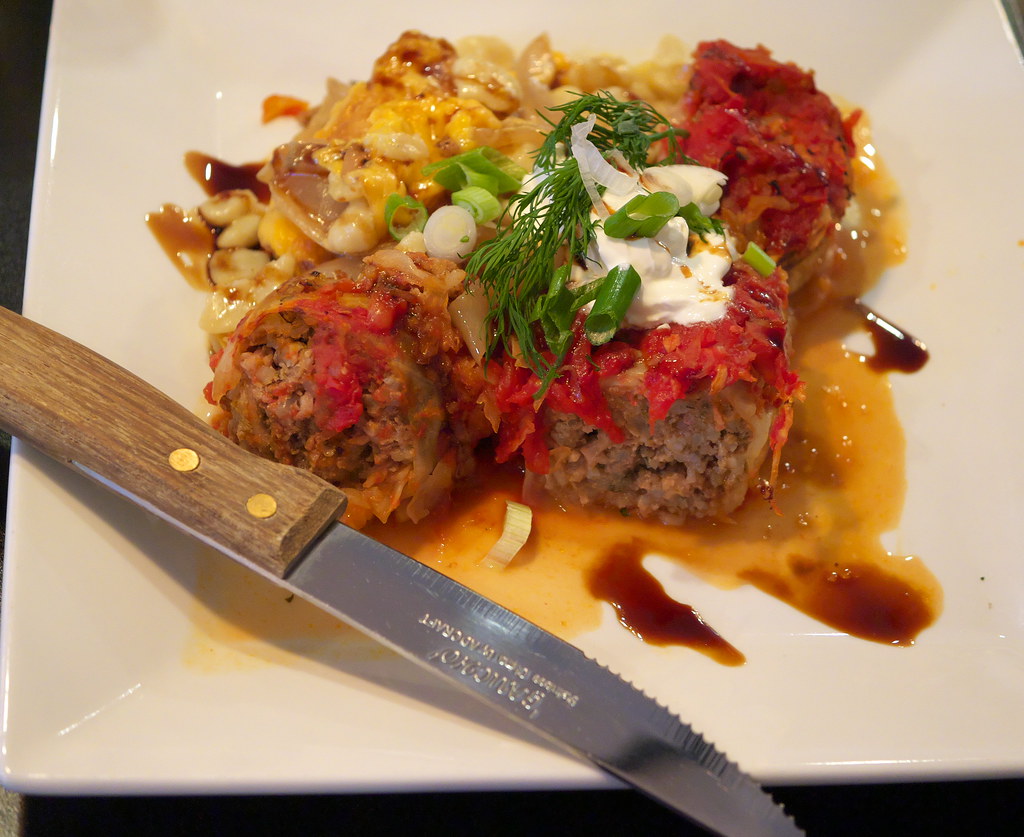 Fun Playing with Food at Bar 50/20 AKA Mish Mosh

Mish Mosh made it's first appearance on this blog in March 2017. At that point, we'd only scratched the surface of their food; I thought surely I'd posted about them again. But with the roller coaster our lives have been on the past few years, it never happened. Until now.
Chef-Owner Howard Curtis and his sons, Chandler and Skyler Curtis, cook up an eclectic menu and a constantly changing bevy of specials for lunch and dinner Monday through Saturday at their cozy space located at 5020 Brainard Road in Solon. In nice weather, their outdoor patio is primo. Howard's wife and Co-Owner Jamie curates a lovely wine selection year round. It is one of our favorite places to dine. A base menu of starters, sandwiches, burgers, pizza, salads and entrees is complemented daily by a specials list that can compete with any restaurant in Cleveland for quality, freshness and creativity. Price points range from $10 up to $24 for the Strip Steak, and mid twenties to low thirties for some specials.
Since it seems my photographs have been accumulating for over two years, here are some highlights: 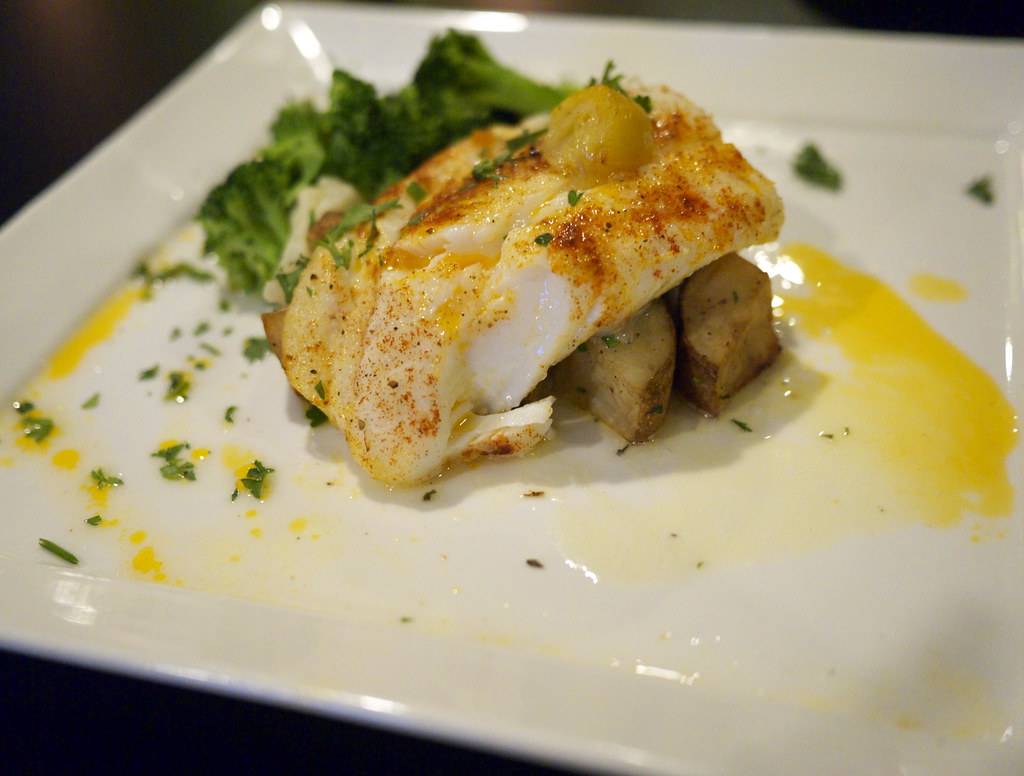 This gorgeous piece of cod was also from the 2017 Lenten season. 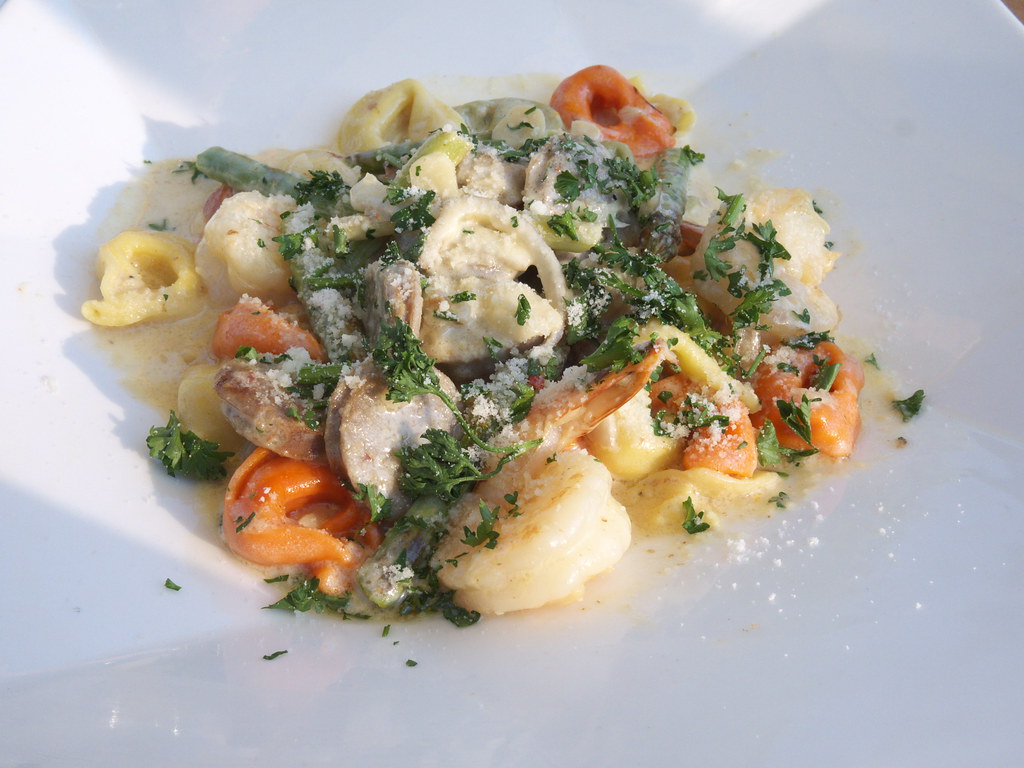 Continuing from 2017, this Special featured Tortellini, tossed with sausage, seafood and cream. 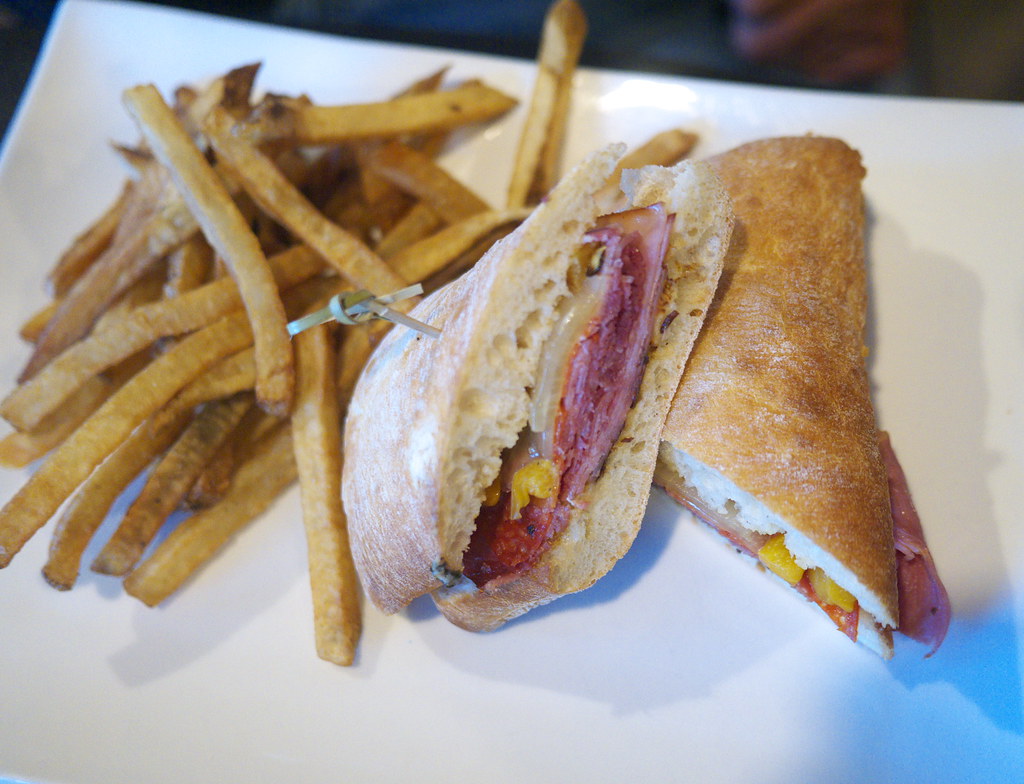 Bob enjoyed their take on a Banh Mi. Roast Pork, Country Pate, Pickled Carrots, Daikon Radish, Nuoc Mam Cham were served on a Crusty Baguette. It took them a while to get the hang of the fresh cut fries, but get it right they do!

When Stuffed Cabbage is on the menu, it is on my plate! Served here with potato-cheese pierogi (and a tossed salad first, with housemade balsamic dressing). Oh, there it is: 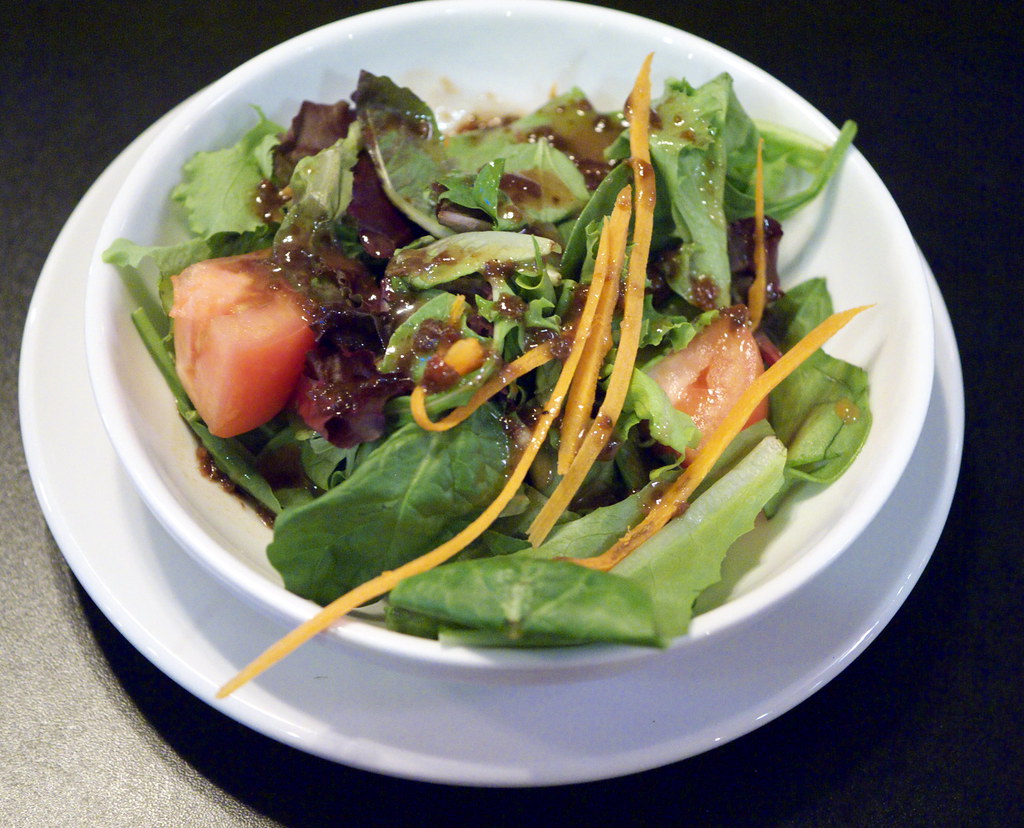 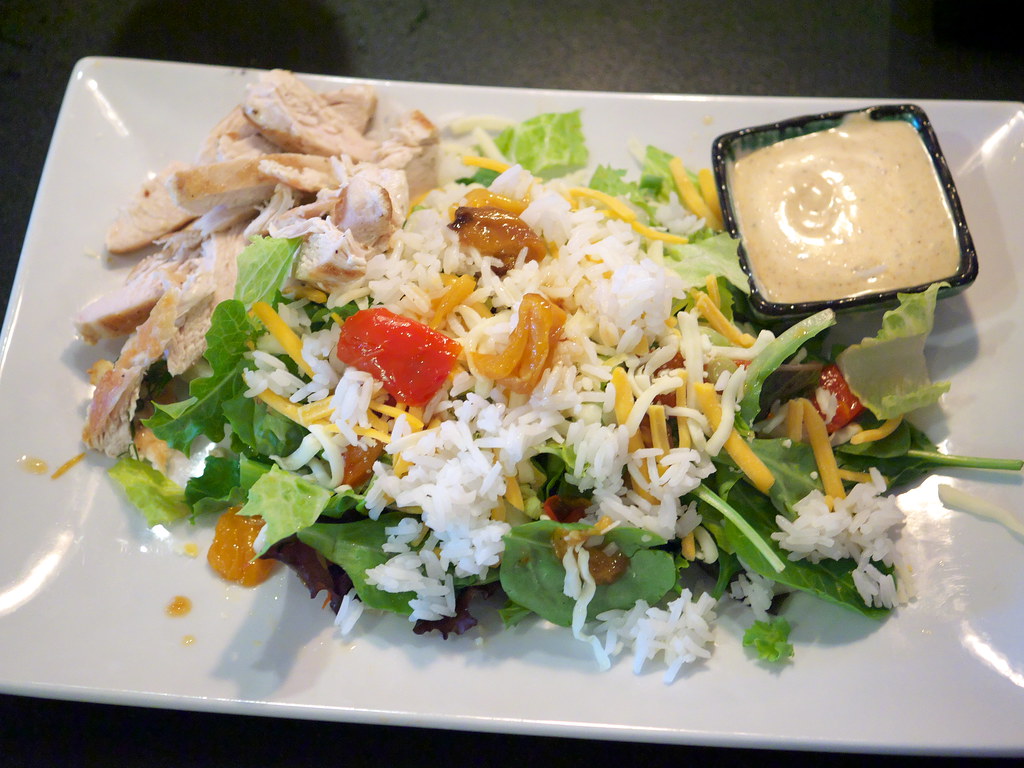 Their Bourbon Street Cobb Salad resembles no Cobb salad I've ever had, but it's delicious. After the first time I had it, I asked for the dressing on the side because it is a spicy meatball! Mixed Greens, Rice, Cheddar and Mozzarella, Scallion, Roasted Peppers, Cajun Ranch with an "add" of chicken.

This Sausage Kale Soup actually made kale not just palatable, but delicious! Another awesome soup selection is their Clam Chowder with Bacon. 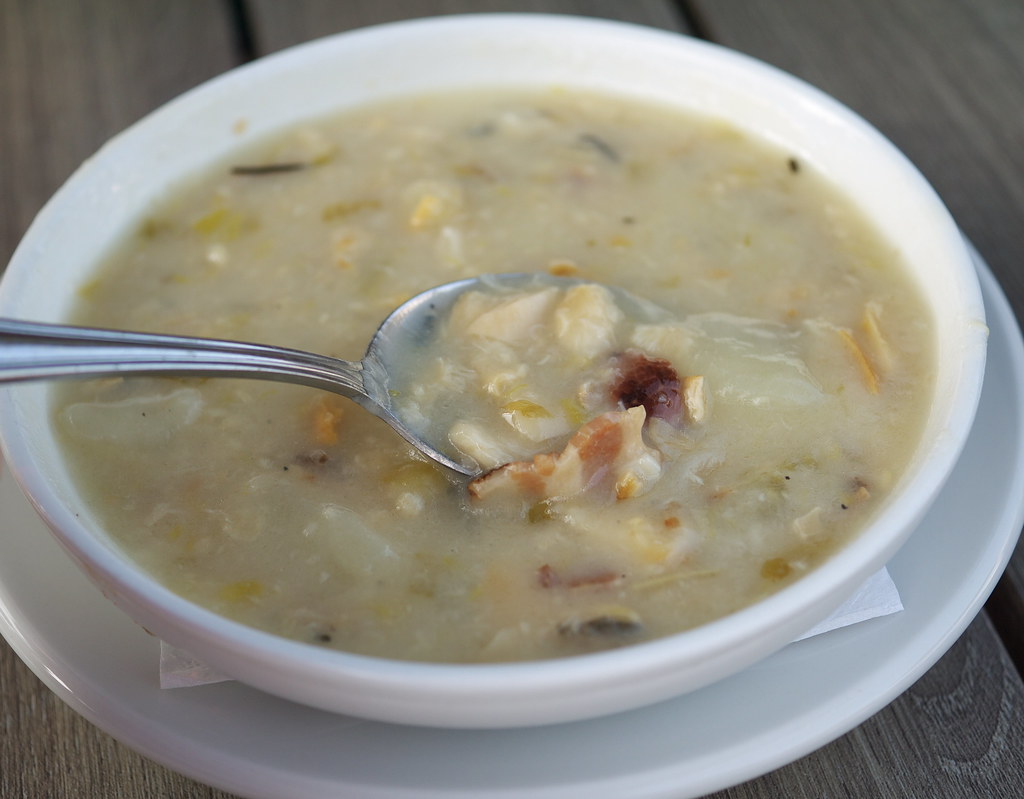 This particular dinner was enjoyed on the aforementioned patio. 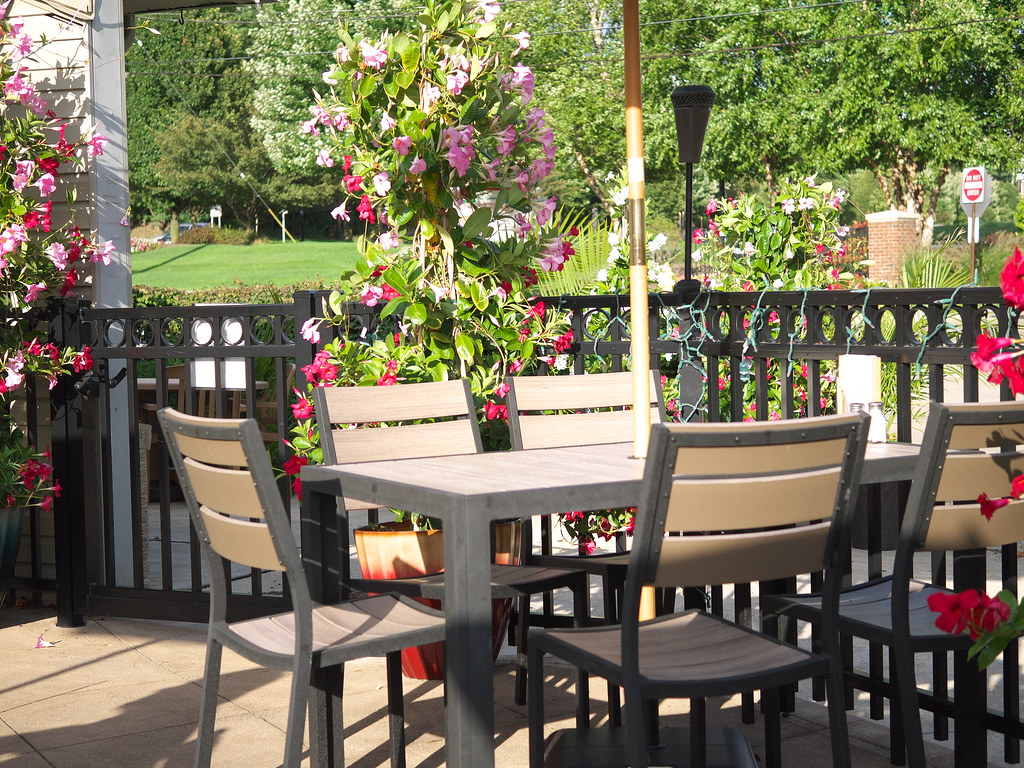 Another standout from the regular menu is the burger selection. 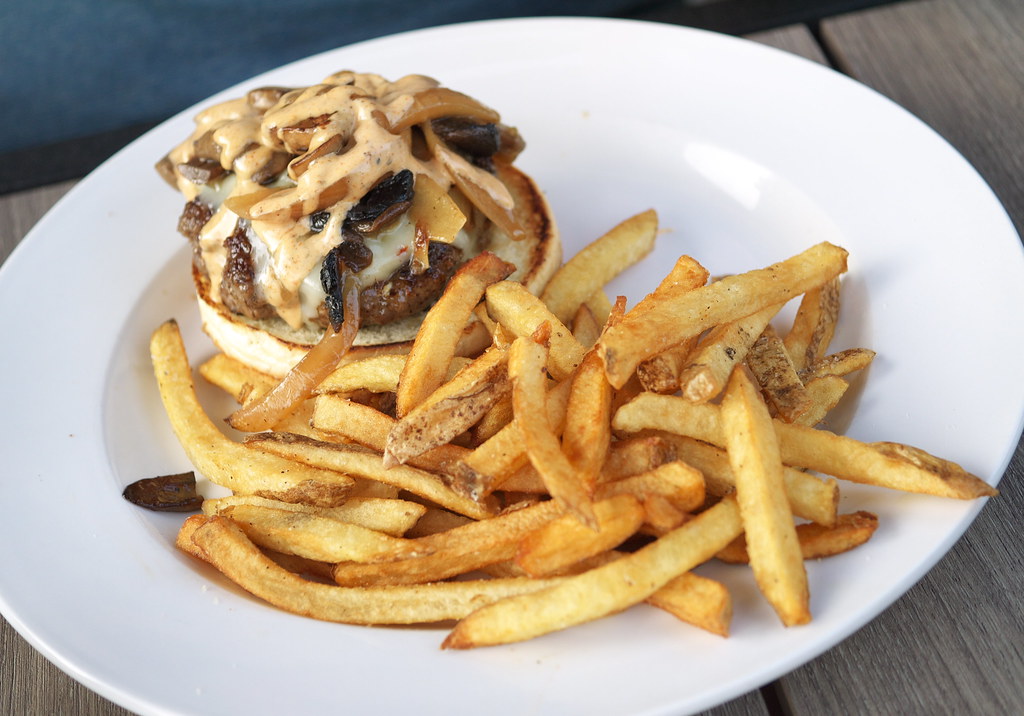 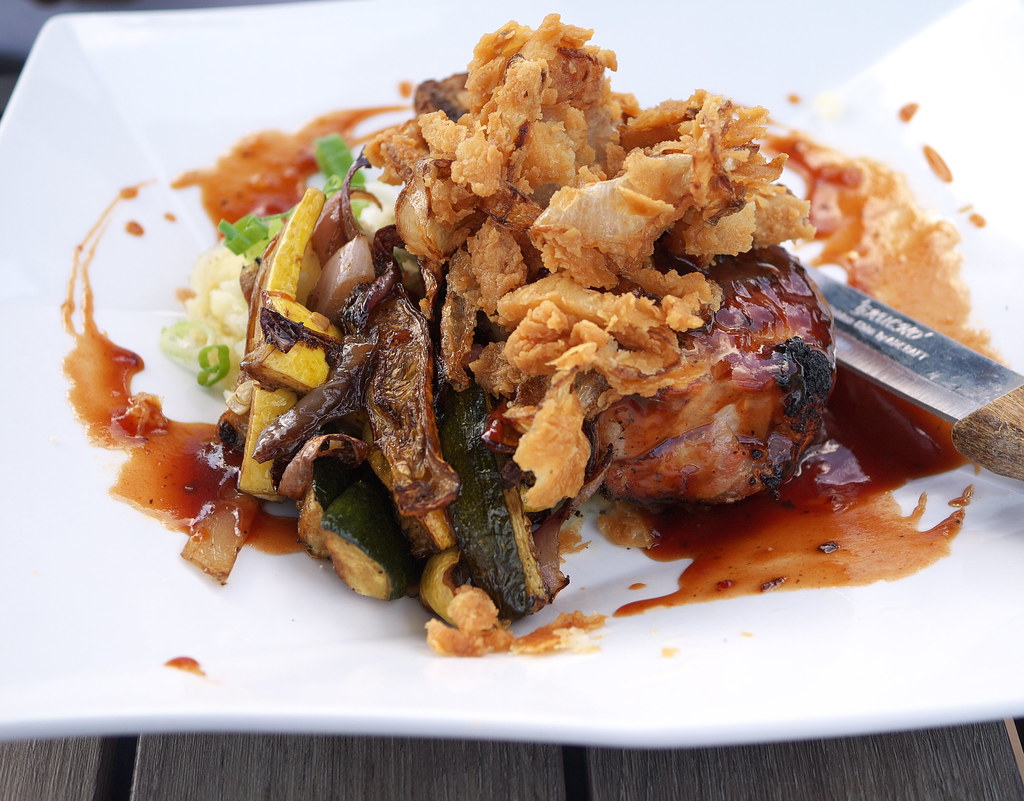 This Pork Chop special also made Bob very happy, There were enough leftovers for a second meal!
Bob had tried the pizza over the last couple of years, but it never appealed to me. Howard, a Connecticut native, sympathized with my longing for East Coast style pizza, but it's not what he serves here. Still, something made me decide to try it. And, as Anthony Bourdain said of Chicago's Burt's Pizza (deep dish) back in 2008 - it's not pizza (as I know it), I don't know what it is but it's delicious! 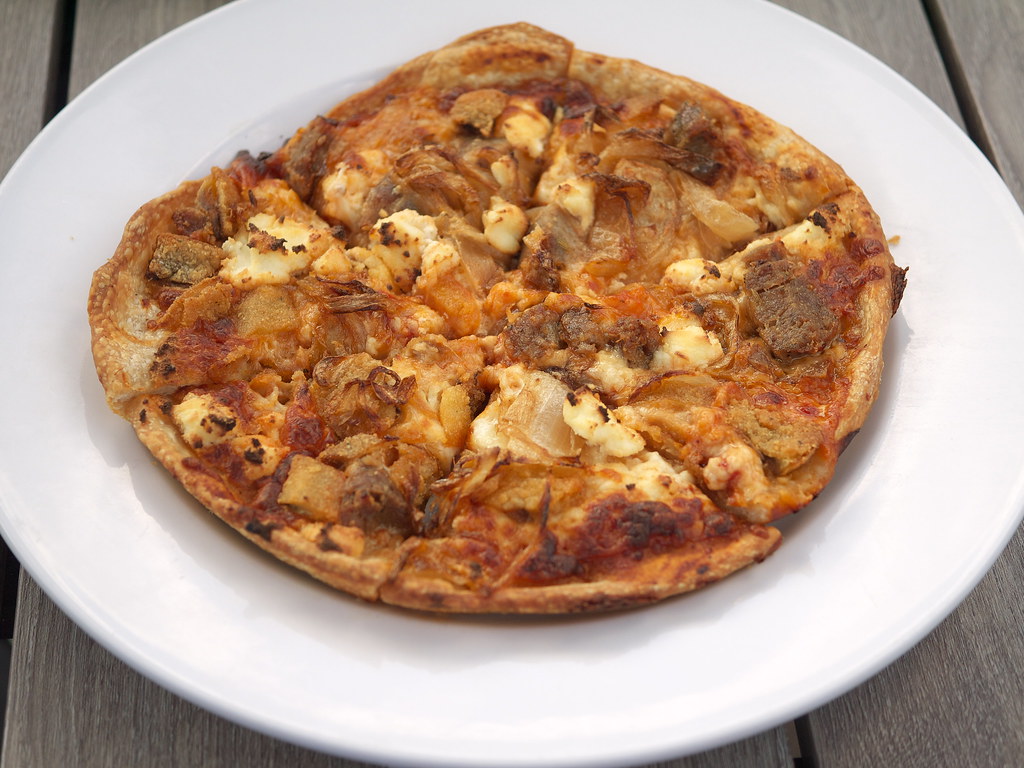 The crust had a great chew and crunch, and even though it was cooked in a pan, I liked it! So much so that I ordered another style on my next visit. 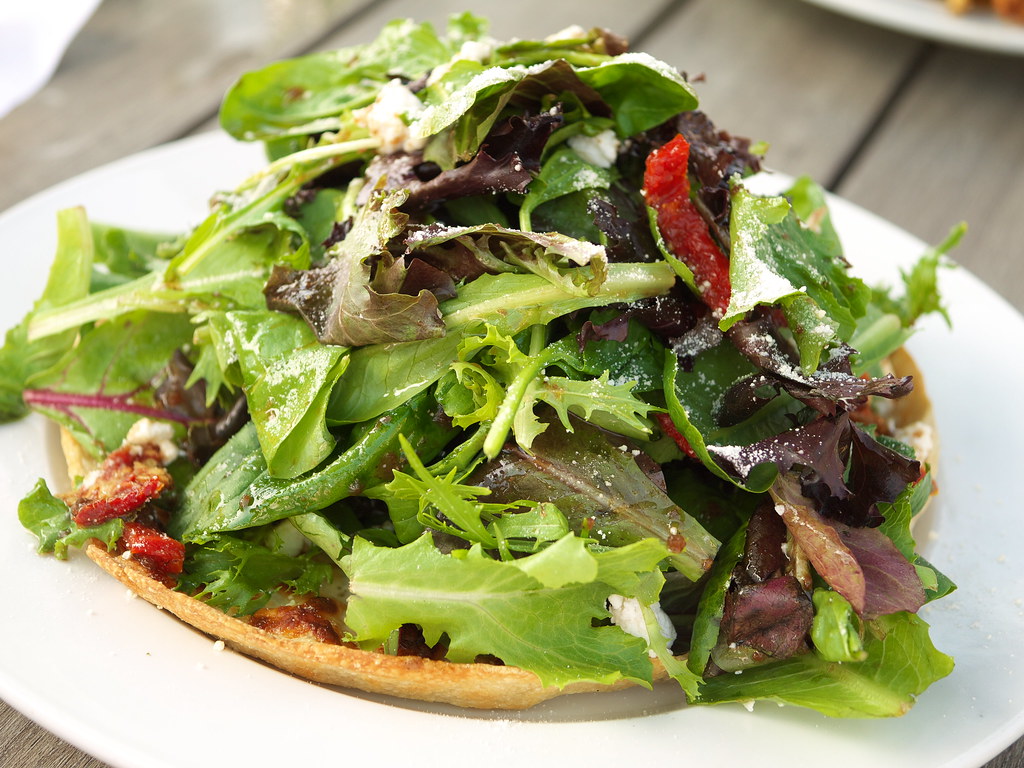 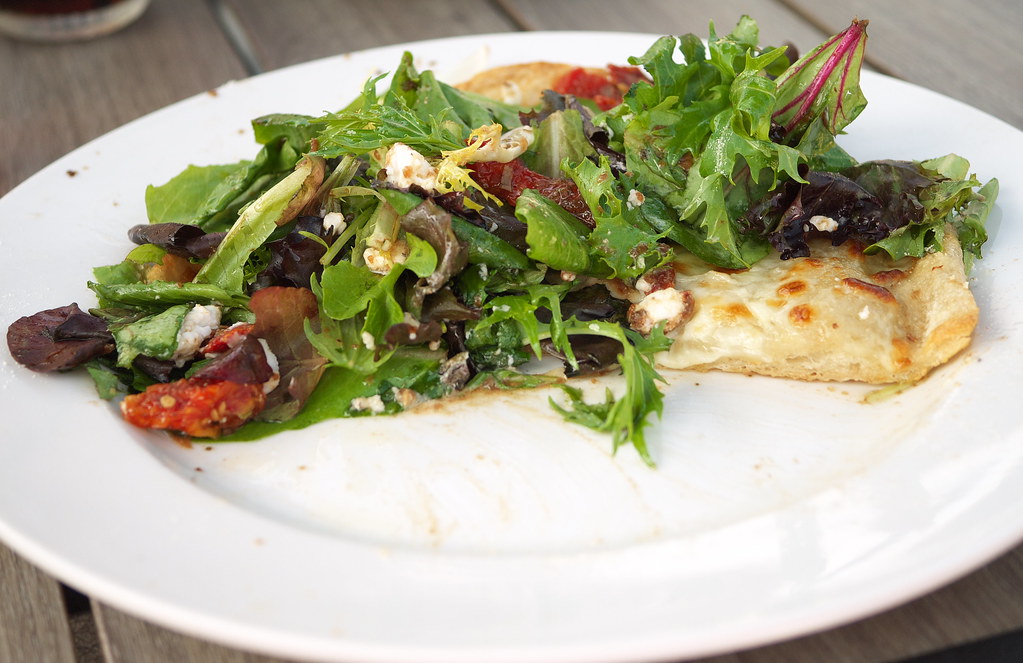 They call this the Mesclun Pizza: A plain cheese pizza topped after baking with Baby Field Greens, Sundried Tomato, Goat Cheese, Balsamic Vinaigrette. And as weird as it may seem to top a pizza with a salad, the sun dried tomatoes really pull it together and make it work. Though I confess I ate the greens part mostly as a separate salad component and not still on the pizza.
Howard and Jamie offer delicious food, gracious hospitality, and a killer patio (in season). Highly recommended for Fun Playing With Food in the Eastern suburbs!
Bar 50/20 aka Mish Mosh
5020 Brainard Road
Solon, Ohio 44139
(440) 349-7300
mishmosheatery@gmail.com
No website, FB page: https://www.facebook.com/bar5020/
Open for lunch and dinner M-TH 11:30am-11pm, Fri-Sat until 1am.
Source: funplayingwithfood

Fun Playing with Food at Bar 50/20 AKA Mish Mosh